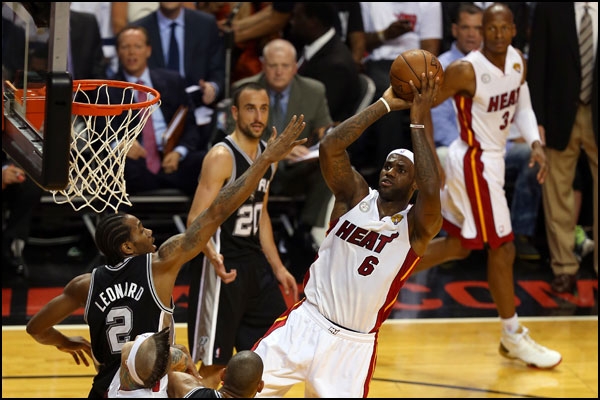 Appeasing fans isn’t easy—especially when you’re in a 0-1 hole after losing the first game at home to a San Antonio Spurs team that opened Game Two with similarly stolid aggression. Danny Green rained down three pointers without hesitation, you could practically hear a pin drop in the American Airlines Arena, and LeBron James’ initial response appeared to be that of cowardice.  Fans clamored at halftime that perhaps we were seeing a regression in LeBron’s “newfound” aggression in the big moment; a myth that was shattered after his dominating run in the playoffs just a postseason before.  With a five point lead at halftime and lots of momentum, some fans still weren’t confident, but in the game of basketball, especially in the NBA, leads mean absolutely nothing.

Basketball is a war, and the battles are won in sequences.  After the first 24 minutes, there is a ceasefire.  Each quarter is a flashpoint to a much larger conflict, and although the ebb and flow of a basketball game isn’t as palpable as a boat ride in rough waters, this proverbial flow is a key concept.  The pace of anything tends to dictate how it will unfold.  In the third quarter of Game Two, the Miami Heat harnessed this flow and crushed the Spurs.  The pace of possessions were quicker, their collective drives to the rim were more confident, their screen and roll passes were crisper, but most importantly, they went in.  You can get the greatest cuts, the best looks in the world in a basketball game, but if you don’t finish, it means nothing.  The Spurs could not handle that pace; it was Miami’s preferred method of waging war on the court.  Sure, the Spurs can execute in transition with the best of them, but Miami is a team that will rip you apart baseline-to-baseline if you make it that kind of fight. 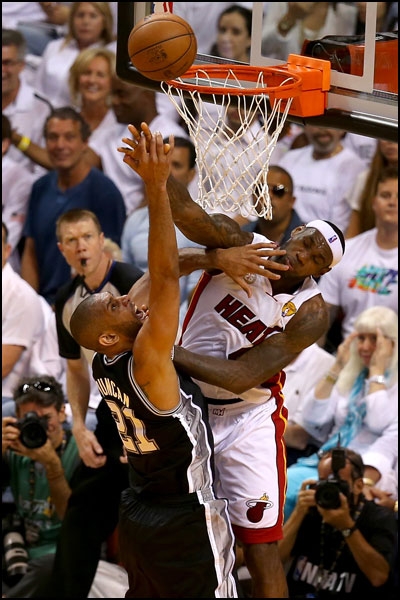 At the end of the game, despite LeBron bouncing back from his terrible offensive first half being the primary story, the game truly said more about Miami as a collective group rather than any individual player.  Miami’s shooters came to play, but more importantly, the whole team came out with a sense of urgency; the same sense of urgency they will need if they are to still stay in the fight for Game Three.  Each individual conflict is unlike the one before it.  Being a victim of the moment is tempting, but basketball at this time of year is a 7-game series, each night is its own event for a reason.

For San Antonio, it could be argued they came out in Game Two looking to steal another, but whether it was a mental lapse on their part, or simply being satisfied with getting the split, the Spurs did not seem as desperate as they had in Game One.  Rather than a nearly immaculate game with 4 turnovers in their first outing, San Antonio fueled Miami’s transition attack by conceding 16 turnovers while Miami only coughed up 6 possessions. Despite the 19 point shellacking, San Antonio is still favored by odds makers in virtually every market as 2-point chalk.  A casual observer might be licking their chops at the prospect of a generous payout siding with a Miami team that just destroyed San Antonio, but psychologically, this is a whole new animal.  San Antonio now enjoys the comfort of home ourt for a little while, and while their previous game was disappointing, they can feel a slight sense of security knowing they managed to steal a game in one of the toughest home arenas in the NBA.

For the Heat to prevail, LeBron has to stay aggressive, and whether that’s scoring points for himself or others, it makes no difference, but he has to generate points for the team.  In the previous game, some of his looks were tough.  Help was quick to slide and double, lanes were clogged, people made him catch farther out on the floor than he usually likes for posting up. San Antonio, for a lot of possessions, forced LeBron to play a face-up game he’s not accustomed to.  LeBron needs to dribble, LeBron needs to get his momentum going, yes his shot is improved, but he is at his best in transition or penetrating with a step or two off the dribble without being smothered.  Props to Kawhi Leonard’s defense and the efforts of helpers, but at times LeBron simply wasn’t himself.  In some transition opportunities he shied from contact rather than welcoming it, and some looks around the rim he missed were simply inexcusable for a player like LeBron—something you could tell greatly frustrated him after repeated misses.  He got the ball to shooters, but at times they were just tough shots they managed to knock down despite hard contests from opposing guards or guys rotating late to the corner.

If LeBron plays with fire by assuming his shooters can bail him out like last time, the results won’t be as fortunate for Miami.  This doesn’t mean forcing bad shots, but it means working harder to establish his presence and avoid getting letting tough misses shake his confidence. There’s no question Greg Popovich has been scheming, but Miami needs to ensure they can repeat the same success by sticking to their same game plan.

Limit turnovers, push the pace, have a short memory, and play with the same desperation—all of which should be focal points for Miami coming into Game Three.  No matter how easy the previous game seemed in the second half, tonight is a whole new ballgame.  Whether their aggression is exhibited from an extra pass to an open shooter, or driving to the lane for a hard finish, at the heart of it all, Miami must make a statement by flying right out of the gate ready to lockdown and dictate the pace yet again.