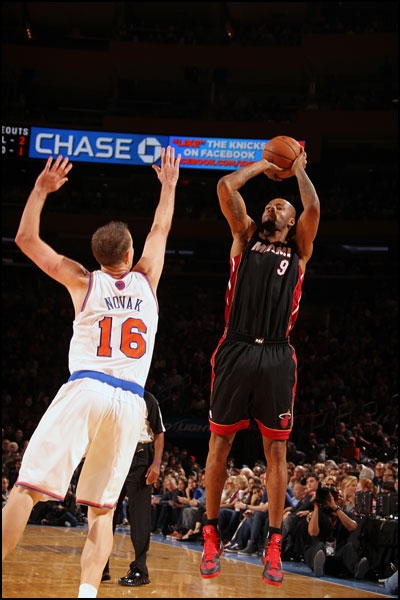 Photo by Nathaniel S. Butler: "A silver lining for Miami was the surprise play of Rashard Lewis, who had 16 points and sunk 4-of-6 attempts from three point range in twenty minutes off of the bench."

With portions of the city still flooded and billions in damage remaining, New York City hosted its first game of any sport since the devastation that Superstorm Sandy left behind.   The last time the New York Knicks hosted the Miami Heat at Madison Square Garden, the Heat celebrated a 106-94 victory that clinched the opening playoff series for Miami and sent the Knicks home early last season.

Inspired by the support Knick fans showed, Carmelo Anthony uplifted the city, scoring 30 points and pulling down 10 rebounds as New York rejoiced in a 104-84 victory to open the season.

“It shows a lot about New York City,” Anthony said in a post game interview.  “We came together in these tough times; we all know what happened with Hurricane Sandy, but the city came together tonight.”

Prior to the game there was a moment of silence for the now 50 casualties as a result of Sandy. Point guard Raymond Felton, who played for the Portland Trail Blazers last season, spent the 2010-2011 season with the Knicks and in his return, added 14 points and dished out nine assists.

The Heat came out flat on offense, and the intensity on defense never made the trip from South Beach, as the Knicks outscored the Heat 33-17 after the first quarter.  LeBron James led the way with a typical night scoring 23 points, seven rebounds, and five assists, yet Miami managed a disappointing 40 points in the second half and never recovered from the early deficit they faced.  The Heat defense, who held opponents to 92.5 points per game last season,  has given up 100 points or more in back-to-back games to open the 2012 season and will have to find a way to battle with their smaller lineup.

After a great game against Boston, Chris Bosh struggled against Tyson Chandler, shooting a disappointing 5-of-13 for 12 points, but did have 11 rebounds, adding to his double-double total. Ray Allen, who had an impressive 19 points in his debut with Miami, managed to connect on only one three pointer and had only five points.  A silver lining for Miami was the surprise play of Rashard Lewis, who had 16 points and sunk 4-of-6 attempts from three point range in twenty minutes off of the bench.

“We wanted to make it tough on them,” Anthony said.  “You know, contest them, stay in front of them, hold them to one shot, get the rebound go and take our time on offense.”

Anthony completed his remarkable 16 point first quarter with a three pointer that beat the first quarter buzzer, one of his four made shots from beyond the arc.  As a team, the Knicks shot 52.8 percent from three point range, making 19 of their 36 attempts.  Steve Novak led New York connecting on five shots from deep, totaling 17 points off the Knicks’ bench.   Jason Kidd, who made his debut for the Knicks, played just 23 minutes, adding 12 points and three assists.  Kidd will split time with Felton, but with Iman Shumpert out after tearing his ACL in the first game of the Knicks playoff series with Miami back on April 28, both were used together in the backcourt to start the game.

In a selfless act, Dwyane Wade, who felt the game should not have been played, contributed to the relief for the city of New York by donating his game check.   Wade had a sub-par 15 points but did manage to shoot 70 percent from the field.

New York played their first of many games without their other superstar Amar’e Stoudemire, who is out six to eight weeks with a knee injury.  In their home opener, a mere Knicks’ victory does not guarantee success on the court for the remaining 81 games, but it gathered a traumatized city under one roof, a roof many are without, and for a few hours the losses at home were put aside for a common cause of triumph.

“This is the most important time for the city of New York to come together as one and help rebuild the city back up,” Anthony said as he addressed the crowd during pregame.