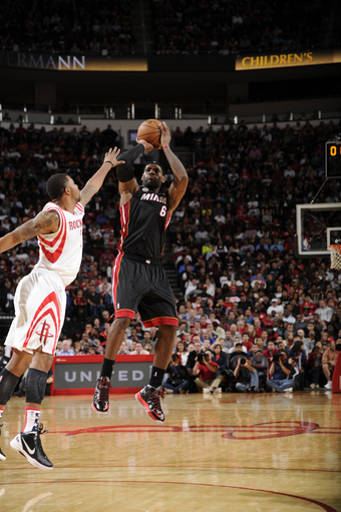 AP, "On this Monday night, three-time MVP LeBron James, was simply not human."

He’s been in this position before, 18 seconds left on the clock, the Heat trailing 110-109, and the ball in the hands of none other than LeBron James.  Widely referred to as a choker, three-and-a-half quarter player, and other naysaying condescending names, Monday night in Houston, James took no prisoners. Instead of pulling up for the typical mid-range jumper as many would have expected him to do a couple years ago, LBJ drove in past his defender, went to the otherside of the hoop, and layed the ball in softly to take the 111-110 lead against the Rockets and the rest was history.  Erik Spoelstra put it best, “How did anybody ever question him?  He’s the ultimate competitor.”  LeBron finished the night with 38 points, 10 rebounds, and six assists, while scoring 16 of his 38 points in the fourth quarter.  On this Monday night, three-time MVP LeBron James, was simply not human.

After playing a somewhat sub-par first half with just six points, LBJ shifted into another gear and made shot after shot to keep Miami in the game.  Spoelstra added, “LeBron was very VERY good down the stretch.  He bailed us out on several possessions and he WAS the offense.” When James was asked if he liked the anxiety at the end of games, he responded with, “I guess that’s what being a champion is all about.”

In addition, Chris Bosh has slowly become Miami’s most consistent and reliable player. Spoelstra commented on Bosh’s game by saying, “He’s so quiet and steady that we don’t even mention him, but he’s our most important player.”  Bosh contributed on the night with 24 points and 10 rebounds, with his final rebound coming on one of the most crucial possessions of the game.  Down by a point, the Rockets fouled Dwyane Wade with eight seconds left to play and Wade picked a critical moment to miss both.  That’s when Bosh decided to put on his Superman cape on, grab his 10th rebound and put the Heat up for good by sinking two clutch freethrows.

Both Wade and Bosh had a superb first half combining for a total of 33 points and carried most of Miami’s scoring load by halftime.  Wade finished the game with 19 points, seven assists, and six rebounds, and the “Big Three” accounted for a total of 81 of the Heat 113 points.  Wade said, “We got key stops and key rebounds.  But we had a guy who went off on the offensive end,” referring to James.

Along with his fantastic night, LeBron set a new Heat record by scoring more than 10 points in 149 consecutive games on Monday night.  But by no means was this an easy walk away victory. Houston shot lights out from beyond the arc and made 12 three pointers, five of which were made by Chandler Parsons.  Omer Asik also contributed with a strong performance of 19 points and 14 rebounds for the Rockets.  For Miami, this was a big win for them because of the competitiveness it brought out of the Heat, which they have been lacking on this recent road trip. Coach Spoelstra seemed to recognize this as well and said that “the body language and the spirit was much better than last night,” referencing the thrashing that Miami took in Memphis. Miami looks to continue their six-game road trip as they take on the Los Angeles Clippers on Wednesday night at the Staples Center.