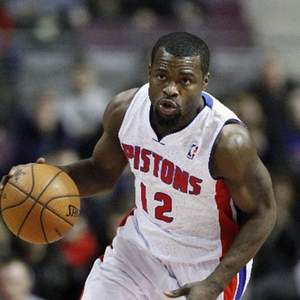 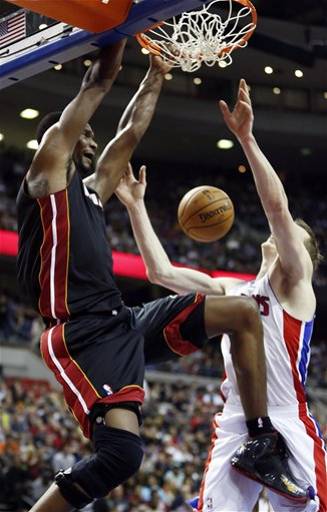 AP, "LeBron James and Chris Bosh, who finished with 28 points and nine rebounds, clearly got the memo, but the rest of the team were not as wary."

It started off as another typical night for the defending champion Miami Heat.  Jumping out to a 32-17 lead after the first quarter, all signs pointed to another blowout at the Palace of Auburn Hills, courtesy of the Heat.

Then came in the Detroit Pistons’ bench.  Detroit’s second unit combined for a total of 64 of the Pistons’ 109 points and everytime it looked like the Heat were about to go on a run, Detroit answered.  Austin Daye, Will Bynum, and Charlie Villanueva combined for nine three-pointers, but Friday night clearly belonged to Bynum.  The point guard from Georgia Tech came off the bench to score 25 points and dish out 10 assists as he gave both Mario Chalmers and Norris Cole fits on the defensive end all night.

When asked about his performance, Bynum contributed his big night with mere dedication and hardwork, “I have a consistent routine. I’m constantly working and believing in myself. I work my tail off all summer and sacrifice a lot for this game and it’s just paying off.”

LeBron James, who finished the night with 35 points on 15-22 shooting, said Bynum was “amazing” and stated after the game, “He controlled the game with his motor and his offense.  He was hitting everything and he was getting everyone else involved.  We couldn’t do anything with him.”

With Dwyane Wade serving a one-game suspension because of an incident that occured Wednesday night against the Charlotte Bobcats, the rest of the team had to pick up the scoring load.  “We still had enough,” Heat coach Erik Spoelstra said.  ”Obviously, we’re a different team with Dwyane, but we have enough depth that we should be able to overcome missing one guy for a night.”  LeBron James and Chris Bosh, who finished with 28 points and nine rebounds, clearly got the memo, but the rest of the team were not as wary.  James and Bosh combined to shoot 26-39 from the field while the rest of the team shot an abysmal 13-38 on the night.

As awful as Miami’s offense was, the clear culprit was the entire Miami Heat defense.  James seemed to agree when he said, “We’re a team that wants to be whole every night we go out there.  A big part of the team was missing, but guys have to step up.  We didn’t have enough tonight defensively.”  It was evident that once again Miami played down to their level of competition.  Rotations were slow, closeouts were non-existent, and team communication was nowhere to be found.

Look for Miami to turn up their defensive intensity when they take on the much more imposing Milwaukee Bucks at the Bradley Center on Saturday night.