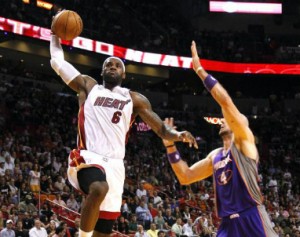 Getty Images, "However, it was the defense and rebounding that was perhaps most welcome for the Heat, who struggled to get stops through the season’s first three games and was outrebounded in every game before Monday night."

LeBron James had 23 points and 11 rebounds, and Dwyane Wade added 22 points to lift the Miami Heat to its third win of the season with a 124-99 rout of the Phoenix Suns on Monday night in Miami.

The Heat (3-1) led 65-53 at halftime but used a 28-10 run in the third quarter to quickly pull away from the visiting Suns, who took their second lopsided loss in as many nights after falling to the Orlando Magic on Sunday.

Wade set the tone early by scoring seven of Miami’s first 13 points in what was his sharpest offensive effort of the young season.

The Suns fell behind by as many as 17 points in the second quarter before cutting the deficit back to 12 at the break.

But Wade again sparked the Miami offense in the third, scoring the team’s first seven points to start the quarter.

From then on it was a shooting gallery for the Heat, who got five of its 15 three-pointers in the third, with LeBron James’ trey from the right corner putting Miami up 96-71 with 1:28 left in the period.

James led the Heat with 23 points to go with 11 rebounds, with Wade adding 22 points and six assists, and Chris Bosh contributing 18 points.

Combined, the Heat’s three stars shot 26-of-41 from the field.

Miami shot 54 percent as a team and 57 percent from the three-point line, making 15-of-26 from long distance.

It was the third time in four games that the Heat topped the 50 percent mark from the field.

“I just credit the ball movement, getting the ball to guys in rhythm” Wade said.

The Heat also got plenty of bench production with 47 points led by Ray Allen’s 15 and Udonis Haslem’s 12.

He also topped the 23,000 career points milestone for his career.

“It’s a seal of verification for everything I’ve done over my career,” he said.

Mario Chalmers tied Allen for the team lead with three triples of his own, and added a season-high 11 assists to just one turnover.

Miami’s passing was superb all night, with the team assisting on 33 of its 47 made field goals.

It was enough to impress the Heat’s opposition Monday night.

“That was probably the most unselfish team I’ve ever played against since I’ve been in the NBA,” Suns forward Jared Dudley said.  “It was drive, kick, swing, penetrate, flair.  I mean, they were hitting everyone.  Even when someone had a good shot, they would make an extra pass to someone who had an even better shot.”

However, it was the defense and rebounding that was perhaps most welcome for the Heat, who struggled to get stops through the season’s first three games and was outrebounded in every game before Monday night.

But the Heat defense limited Phoenix to just 39 percent shooting and 33 percent from the three-point line, and won the rebounding battle 49 to 38.

Lewis and Allen provided six rebounds each off the bench, and Haslem contributed five boards in his biggest contribution of the season thus far.

James said that when the Heat defends like they’re capable, it makes the team’s offensive attack even more deadly.

“We preach defense here,” he said. “When we defend, we can do whatever we want on offense. The sky’s the limit offensively.”

Shannon Brown led the Suns with 18 points off the bench, with Marcin Gortat adding 12 points and 13 rebounds.

The Heat topped 119 points for the third consecutive home game to start the year.

Miami will wrap up its three-game home stand with the Brooklyn Nets on Wednesday night.