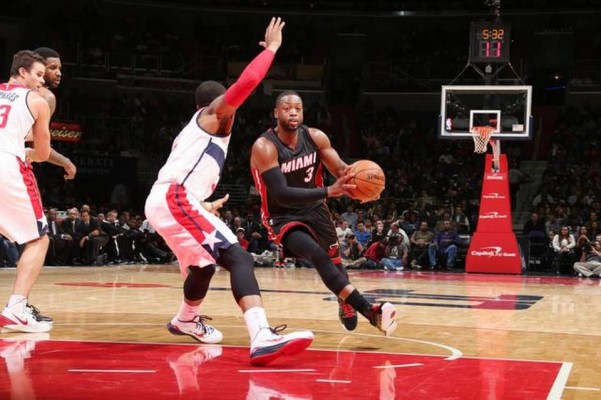 (Washington, DC) – In a battle of Eastern Conference playoff positioning, the Miami Heat (27-33) travel to take on the Washington Wizards (34-27) on Friday night at the Verizon Center, with tipoff scheduled for shortly after 7:00 pm ET.

With the end of the season closing in, the Heat sit as the seventh seed in the East as they have five teams within four games of them.

Miami, in search of its first three-game winning streak since they started the season 3-0, face a Wizards team that has dropped 12 of its last 15 games since a 106-98 loss in Arizona to the Phoenix Suns. This 15-game stretch is currently the worst in the NBA as the Wizards continue to search for answers to right the ship.

“We take too many periods of the game where we coast,” said Wizards head coach Randy Whittman after Tuesday night’s 97-92 loss to the Chicago Bulls. “The last five minutes is how we have been playing for 48 minutes, and until we can get that back it’s going to be a struggle. We take too many shortcuts and until we change that mindset of getting back to playing 48 minutes, we can’t coast the last five minutes and expect to win games.”

One matchup that immediately catches the eye is between the two starting point guards, Goran Dragic and Wizards All-Star John Wall. With 10.1 assists and 1.79 steals per game, Wall currently leads the Eastern Conference in both categories while averaging 17.2 points.

After he put up 18 points, 25 rebounds and 4 blocks in Wednesday night’s 100-94 victory over the Los Angeles Lakers, Hassan Whiteside will look to continue his stellar play on Friday as he will battle in the paint with Wizards center Marcin Gortat, who is averaging 11.8 points and 8.6 rebounds on the season. With Whiteside’s stellar play, Dwyane Wade thinks it’s about time to give much due respect to the 7’0” center.

“The fluke is over,” said Wade. “He is for real about what he does. He protects the basket, he rebounds the ball very well and when he gets mad enough he will dunk over everybody.”

Luol Deng, who contributed 15 points and six rebounds in Wednesday’s win over the Lakers, was also full of praise regarding his teammate’s brilliance.

“He is a unique talent,” said Deng on Whiteside’s production. “He is coming into his own. The more he plays the better he will get. He definitely affects the game in so many different ways. Not a lot of people have the ability to do that. It is very impressive because he doesn’t even need the ball. I don’t know if I’ve seen anything like it.”

The Wizards have a key piece back in their lineup as up-and-coming shooting guard Bradley Beal returned from a leg injury last week, which caused him to miss eight straight games. Beal, who has been inactive due to injury a total of 17 games this season, averages 14.8 points per game and has made 76 three pointers.

With only 22 games left on their schedule, Miami has absolutely no room to relax going down the final stretch of their season. Despite Washington in the midst of a forgettable stretch, they still posses a 21-10 record at the Verizon Center.
[xyz-ihs snippet=”Responsive-ImagenText”]