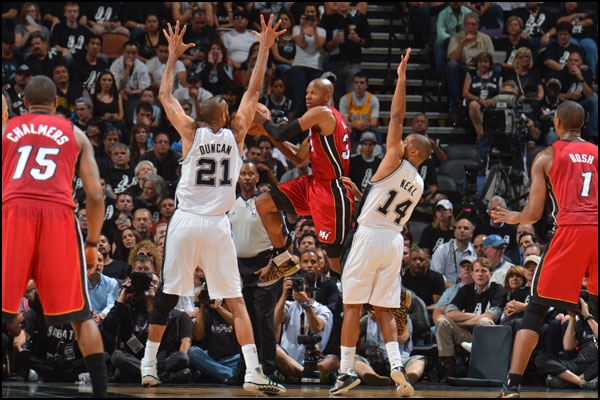 Going into Game 3 against the San Antonio Spurs on Tuesday night, everyone predicted that the Miami Heat would tailor their defense to slow down future Hall of Famers Tim Duncan, Tony Parker and Manu Ginobili.  While the Heat succeeded in that feat to an extent, it was San Antonio’s supporting cast that took over and led the Spurs to an easy 113-77 win. 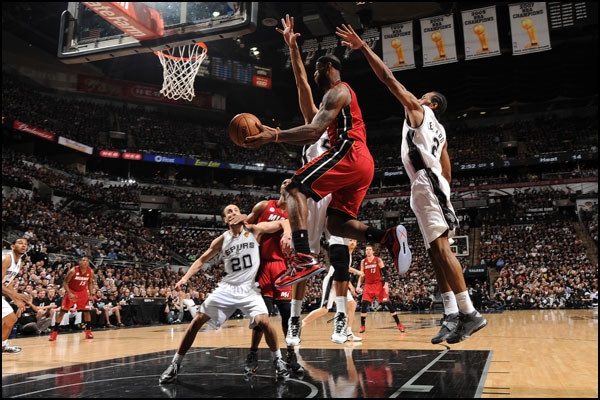 Eager to stop the momentum from Miami’s 103-84 Game 2 victory, the Spurs hit an NBA Finals record 16 three pointers and rode the unsuspecting shoulders of Gary Neal and Danny Green to the blowout victory.  Green, a second round draft pick from the University of North Carolina, led the Spurs with 27 points and shot a scorching 7-of-9 from three point range.  Neal, an undrafted guard who started his professional career with stints overseas in Italy and Spain, hit six three pointers and finished with 24 points on 9-of-17 shooting.  Together, the surprising twosome shot the Heat out of the game much to the delight of their raucous home crowd.

Neal summarized the reason for their success in his post game comments.

“I just wanted to come out with the mindset of being aggressive.  We watched the film and saw how Miami was going to close out,” said Neal.  “We got a lot of clean looks today and we were able to knock them down.”

Much like the Heat did in Game 2, the Spurs took over the game in the second half.  The Heat started the game looking like the defending champions thanks to an active, efficient Dywane Wade and timely shooting from three point specialist Mike Miller.  The first quarter was marked by four-time league MVP LeBron James setting picks and rolling to the basket against smaller players.  The miss matches allowed him to find Wade on a variety of plays en route to eight points in the quarter.  However, despite his activity, the Spurs made 11-of-18 shots and led 24-20 after 12 minutes of action.

After a four and a half minute scoring drought to open the second quarter, the Heat got into a good rhythm thanks to a rejuvenated and focused Miller.  His final three point shot of the half was part of a 12-1 run that pulled the Heat to a 44-44 deadlock before two final defensive breakdowns. Parker hit a fading three from the right corner and Neal buried a buzzer beating three pointer to give the Spurs a small cushion with a 50-44 lead at the half.

From that point on, it all went down hill for the Heat.  Athletic wingman Kawhi Leonard hit a three pointer that gave the Spurs a 69-52 lead.  Despite nine straight points by James to end the quarter, the Spurs won the third 28-19 and the deficit continued to grow.  When it was all said and done, Parker, Duncan and Ginobli were able to rest most of the 4th quarter as the Spurs cleared their bench and kept draining wide open shots.

While the Spurs were able to make good on their open looks, the same cannot be said for the Heat.  With the exception of Miller, who buried all five of his three point attempts en route to 15 points, the rest of the Heat players had rather sub par performances.

James struggled mightily as he finished with 15 points and shot a mediocre 7-of-21 from the field despite a barrage of wide open attempts from the perimeter.  Wade finished with 16 points on 7-of-15 from the field in 34 minutes and Chris Bosh, the often criticized member of “The Big Three” was merely a factor once again with 12 points and ten rebounds on 4-of-10 shooting.  The Heat didn’t get the lift that they needed from their supporting cast either.  After leading the Heat with 19 points in Game 2, starting point guard Mario Chalmers missed all five of his attempts from the field and committed four costly turnovers.  Meanwhile, backup point guard Norris Cole had eight points and missed potential momentum changing shots when the Heat needed it most.

After the game, a frustrated James took responsibility for his dismal performance and pledged to make changes.

The long and aggressive Leonard has been giving James a world of trouble so far in the series.  Not only has James been less efficient, he has also been far less aggressive than we are accustomed to seeing.  This is made evident by the fact that he only has a combined six free throw attempts in the first three games of the series.

In his post game comments, Miami Heat Head Coach Erik Spoelstra expressed confidence that his super star would turn things around and get back on track.

“He’ll figure it out.  He always figures it out.  We’re not concerned about that. We will get him to places where he can feel comfortable and confident,” said Spolestra.

The Spurs are now 14-3 in the post season after the blowout victory at home in Game 3. The 36 point drubbing was the worst loss for the Heat since James and Bosh joined Wade in 2010.  The pivotal Game 4 is Thursday night in San Antonio.  We will see just how comfortable and confident James and the rest of the Heat is by then.

Renaldo is a sports fanatic who is passionate about journalism. After graduating from Florida International University, he has worked for various publications covering a wide range of topics. He currently lives in Miami, FL. "Keep writing, keep living, keep loving"