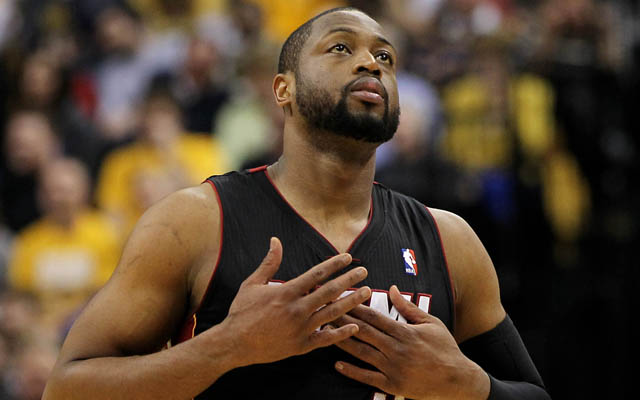 The Heat entered halftime down by just four points but were completely dominated during the second half by a Pacers team motivated by Paul George’s return. Indiana outscored Miami 61-42 as George scored 13 points and converted on three treys in his first live game action since breaking his leg last August.

George first entered the game with a little less than six minutes remaining in the first quarter and received a standing ovation from the hometown crowd.

Miami’s playoff fortunes took a big tumble as they officially lost the season series to Indiana. The Pacers now hold the tiebreaker over the Heat in the event of a tie at the end of the season. Miami now stands a full game back of the Boston Celtics for the eighth and final playoff spot in the Eastern Conference.

The Heat strugged to put the ball in the basket as they once again relied heavily upon Dwyane Wade and Goran Dragic to carry the offensive load. Wade led the team in scoring with 27 points on 11-of-21 shooting while Dragic had 15 points and five assists. James Ennis contributed 17 points off the bench.

Wade shared his thoughts on George’s return following the game:

“I think the basketball world was all saddened when he went down with the injury. He’s one of the good guys, you don’t want to see bad things happen to people like him. But good to see him back on the court as a fan of the game.”

One of the keys of the game was the disparity in the rebounding totals. Indiana not only bested Miami on the glass, 55-37, but the Pacers also had 20 offensive rebounds in comparison to the Heat’s seven. Miami was clearly worn down by the size of Indiana in the paint.

Hassan Whiteside and Chris Andersen both missed the game due to ailments. Udonis Haslem and Henry Walker started as a result for a very small front court line.

Just a night after blowing a huge lead in the fourth quarter of a 99-98 loss to the Detroit Pistons, the Heat have just five games left to make a push for the playoffs. They will return home to play the Charlotte Hornets on Tuesday night to begin a four-game home stand. Three of the Heat’s five remaining games are versus teams below the .500 mark.

Coach Erik Spoelstra was asked on the current situation of the Heat ending the night as the 10th seed:

“We can’t stress out about the other teams. At some point we gotta take care of our own business, that’s what it’s about. We’re going back to Miami and we understand we have a four-game stand there. We can’t play them all on Tuesday night. We have to just focus on Tuesday, get healthy, get right, and realize that we still have an opportunity.”

On a side note, Michael Beasley left during the fourth quarter due to a hyperextended left knee injury. He did not return and it is not yet known how severe the injury is. If the injury is serious and the Heat need an extra body, they would have to cut Beasley in order to add a free agent to the roster.

Tipoff for Tuesday night’s game versus Charlotte is set for 7:30 PM EST and the game will be broadcast on Sun Sports.
[xyz-ihs snippet=”Responsive-Ad”]