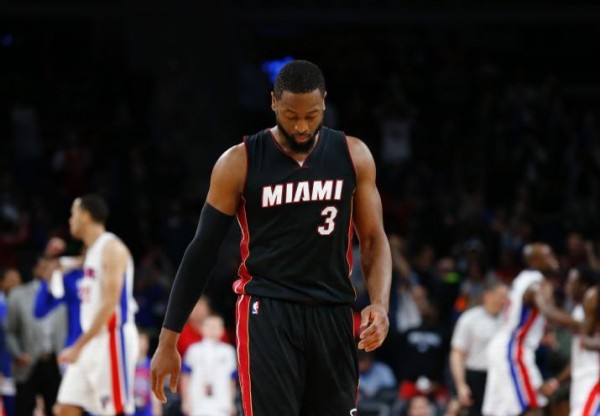 (Detroit, MI) — With a 15-point lead and only 5:31 left in the fourth quarter, the Miami Heat (34-42) were in great position to take over the seventh seed in the Eastern Conference. However, the Detroit Pistons (30-47) had zero intentions of giving up on the game, while the Heat completely fell apart down the stretch in their stunning 99-98 loss at The Palace of Auburn Hills on Saturday night.

“We’re all very disappointed in this locker room right now, but it has to be a quick turnaround,” said Heat head coach Erik Spoelstra after his team’s collapse. “Thankfully we play tomorrow.”

After a dunk by Hassan Whiteside with 2:13 remaining in the fourth quarter, Miami had a 98-89 lead to work with. The Heat did not score another point for the duration of the game, as Pistons point guard Reggie Jackson (29 points and 11 assists) drove to the hoop for a layup with five seconds left.

“This is something I’ve been asking for my entire life, something I’ve always wanted,” said Jackson after the game. “If you want to be the man, you’ve got to go be special.”

Dwyane Wade, who had 24 points (11 of 18 shooting from the field), missed the potential game-winning shot as time expired as Miami lost their third consecutive contest.

“This is a terrible loss,” said a disappointed Wade after the game. “No way we should lose this game.”

Whiteside, who’s currently dealing with a deep laceration on his right hand, suffered a setback on Saturday night during the game. He clearly played through the pain, as the big man scored 13 points, nabbed 12 boards and swatted away a whopping six shots.

“I opened up a couple of the stitches and felt the pain in the second quarter,” said Whiteside. “I just tried to play through it.”

Goran Dragic had a great game for Miami in the heartbreaking loss, as the point guard had 21 points (seven of 12 from the field) to go along with seven assists. Luol Deng also scored in double figures for the Heat, as he tallied 13 points and eight rebounds on Saturday night.

With Miami’s loss and news that the Boston Celtics were victorious (117-116 overtime win over the Toronto Raptors), the Heat dropped out of the current playoff picture to ninth in the Eastern Conference. Six games remain on Miami’s regular season schedule, and the amount of pressure on them to reach the postseason is massive.

Up next on their schedule, the Heat will travel to take on the Indiana Pacers (33-43) on Easter Sunday at Bankers Life Fieldhouse. Sunday night’s contest, in which Pacers two-time All-Star small forward Paul George will make his season debut following a horrific leg injury last summer, is slated to tip off shortly after 6:00 pm ET.
[xyz-ihs snippet=”Responsive-ImagenText”]