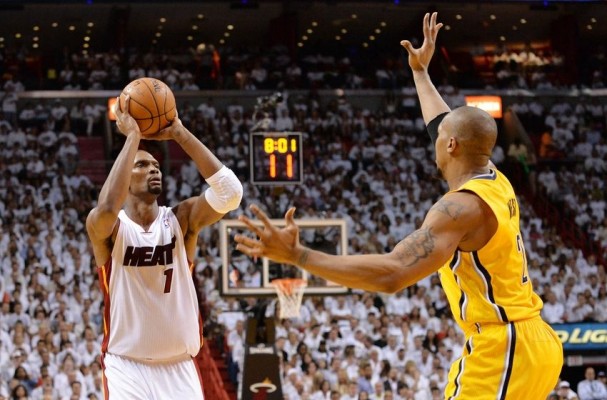 (Miami, FL) — It’s been an uphill battle for the (18-24) Miami Heat. After handing the Charlotte Hornets their first game shooting over .500 this season, the Heat have to find a way to bounce back against the (15-29) Indiana Pacers at American Airlines Arena on Friday night.

Miami enters coming off a 78-76 loss at home to the Hornets. The loss may have been in large part due to the loss of center Hassan Whiteside, who sprained his ankle in the previous night’s game against the Oklahoma City Thunder.

Unfortunately, this is a huge blow to the Heat, who has seen Whiteside transform on the court.

The 25-year old has created a huge buzz surrounding his raw talent in recent games; Whiteside holds the number two net rating on the Heat overall, despite being played for only a fraction of the minutes of his teammates.

Furthermore, of players who have played at least 15 games this season, the upcoming talent has the sixth overall player efficiency rating in the NBA, placing him right above former Heat superstar, LeBron James.

“He’s doing things that he’s gifted to do,” said ESPN’s Mark Jackson, “blocking, altering shots, rebounding, finishing at the rim, playing with high energy. He’s a guy that’s playing with a chip on his shoulder. He’s out there to prove people that rejected him wrong and is off to a tremendous start. He’s going to stick around because of his style of play. There are teams looking for guys to do things that he does pretty effortlessly.”

Luckily for the Heat, the Pacers have also experienced a rather humbling season thus far. With forward Paul George recovering from both a broken fibula and tibia, the Pacers have been forced to dig into the bench. They enter with a six-loss streak, and have averaged 19 turnovers while allowing 100 points in the last three games.

On the other hand, point guard George Hill is expected to make his return to the court off the bench at the AAA.

“We’re not playing with that same mentality that the Pacers normally play with,” he said. “No matter win or lose, I don’t base anything off whether we’ve won or we’ve lost. I base it off how hard we play. Are we the more physical team? We’re the most physical team that hits you first, we’re the team that normally plays the hardest, we’re the team that normally gets all the loose balls and wins the scrum game. So the last couple games, we haven’t been that.”

Luol Deng was seen participating in practice, but Dwyane Wade was absent with an illness. Both are game-time decisions. Coach Erik Spoelstra seems hopeful the Heat can still turn their season around.

“You are what your record is. Our guys are not disillusioned, but nobody feels that we are the team of that record,” he said. “Our guys believe we’re a far better basketball team then how we’ve produced. It’s just about doing it now. You just have to keep digging in until you get your breakthrough.”

Tip-off is at 7:30 PM EST  and will be broadcast on Sun Sports.
[xyz-ihs snippet=”Responsive-ImagenText”]