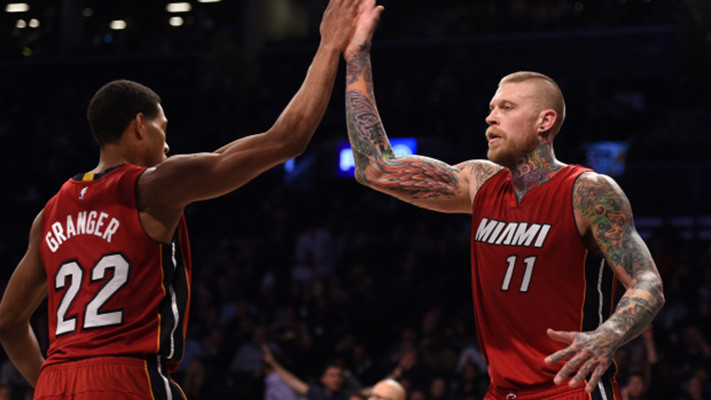 (Brooklyn, NY) — The Miami Heat (11-13) will face the Brooklyn Nets (10-12) on Tuesday night at the Barclays Center in their second matchup with one another this season.

The Heat defeated the Nets on November 17, 95-83, at the American Airlines Arena in the series’ first game of the year. Mario Chalmers led the way with 22 points, while Chris Bosh contributed 15 points and nine rebounds.

Unfortunately for the Heat, they’ll have to match up with the Nets without Bosh this time. The 6’11” center is out indefinitely with a calf strain, and it was reported early Monday that the 12-year veteran may miss a few weeks due to the injury.

After missing his first game of the season on Sunday in the loss to the Chicago Bulls, Bosh stated it was a simple “wear and tear” regarding his injury:

“It’s disappointing. Usually you know when something gives and you kind of feel it over the course of a game and you can point to a specific play when you felt something tweak, or whatever, but unfortunately that didn’t happen for me. I guess it’s a wear and tear thing. It kind of sprung up on me, and you just have to deal with the tough times right now.”

Not only will the Heat be without their All-Star versus Brooklyn, they will also be without Josh McRoberts. McRoberts will undergo surgery for a torn meniscus in his right knee and will be out indefinitely. Center Justin Hamilton is also questionable for Tuesday’s game because of a quad strain.

Due to all of the injuries, the Heat have recalled Shabazz Napier and Hassan Whiteside from their D-League affiliate Sioux Falls Skyforce. The two were sent to Sioux Falls on December 13, but their stay lasted just one game and two days. Both players will be ready to suit up versus the Nets.

Miami had one of their worst games of the season in their 93-75 loss to the Bulls on Sunday. The short-handed Heat scored a season-low 75 points on just 35 percent from the field and 18 percent from three-point range. Dwyane Wade led the squad with 17 points, but did so on just 7-of-18 from the field.

Bosh summed up the team’s misfortunes this season due to injuries with the following statement:

“It just seems to be a dark cloud over everything right now. We just have to stay strong, keep our head above water.”

While the Heat may have a dark cloud hanging over them currently, the Nets have been struggling the entire season. Just a year after finishing with the fourth-best record in the Eastern Conference, Brooklyn stands two games under .500. Making matters even more pressing, the Nets are exploring options regarding trades involving Deron Williams, Joe Johnson and Brook Lopez.

Johnson is making $23.2 million as the third-highest paid player in the NBA, Williams underwent offseason surgery on both of his ankles, and Lopez has played in just 96 games over the past three seasons due to injuries to his feet and ankles.

The Nets cruised to a 114-87 win over the Charlotte Hornets on Saturday for their second straight victory. Brooklyn knocked down 16 three-pointers and were led by Johnson’s 22 points. The 13-year veteran was 9-of-16 from the field and 4-of-6 from beyond the arc. He scored 14 points in the first quarter alone.

Johnson felt his aggression was key in leading the Nets to victory:

“I was trying to be more aggressive and make plays and I got into a little rhythm early. I just tried to ride that wave in the first quarter.”

When Johnson isn’t knocking down long-range shots, the Heat will have to worry about Williams’ playmaking ability. Despite injuries, the veteran point guard has played in all 22 games this season. He’s averaging 16.5 points and 6.7 assists per contest.

Though the Nets are a strong defensive team, ranking 10th in the NBA in points allowed, they struggle offensively with just a 96.4 scoring average, good for 21st in the league in points per game. And although Williams remains a solid distributor, the team is 20th in the league with 20.5 dimes a game as the team struggles to move the basketball.

Both the Heat and Nets advanced deep in the Eastern Conference playoffs last season, but both teams are still trying to find their identity at the quarter-mark of the season. Entering this game, Miami and Brooklyn rank seventh and eighth in the conference standings.

Tipoff is set for 7:30 pm EST and the game will be broadcast on Sun Sports.
[xyz-ihs snippet=”Responsive-Ad”]