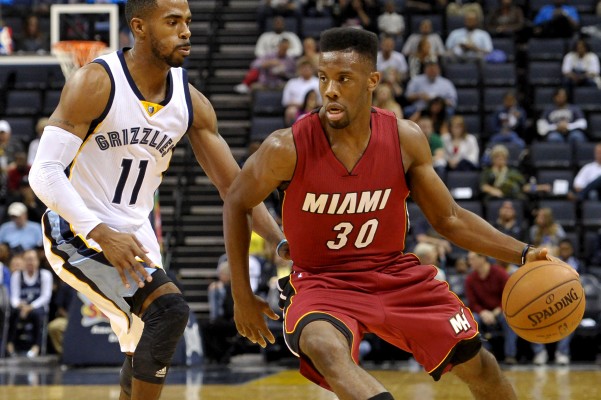 (Memphis, TN) — The Miami Heat (9-10) travel to Tennessee to challenge the Memphis Grizzlies (15-4) on the road as both teams try to bounce back from their losses on Friday night. It will be the second game of Miami’s five-game road trip, and the first time the two teams meet since their final preseason game where the Heat put down the Grizzlies at home, 104-98.

In their last meeting, Chris Bosh led the charge with 21 points and six rebounds while Dwyane Wade failed to miss a shot until there was only 2:07 left in the first half, putting up 16 points overall. It was a great end to the preseason for Miami, and things were looking up for the 2014-2015 season.

A lot has changed since then.

Though the Heat have already managed to overcome the Grizzlies once this year, the playoff-hungry Grizz are not the same team they were in the preseason, as they have landed themselves a fourth seed in the Eastern Conference. The Heat, on the other hand, have been plagued by injuries and poor defense, and are struggling to hold onto the number three spot in the Southeast division.

Luckily for Miami, they caught the Grizzlies at their lowest point this season, with back-to-back losses; one against the Houston Rockets on the road, and a crushing defeat against the San Antonio Spurs, which ended their 22-game winning streak at home. Marc Gasol gave it his all, putting up an impressive 28 points and 12 rebounds.

“I don’t care how many times they beat us before,” Gasol said. “I felt we were going to get them. But, you know, it didn’t go that way.”

In another stroke of luck for Miami, guard Norris Cole and forward Luol Deng were both able to participate in practice on Saturday. “I’m feeling a lot better,” Cole stated when asked about the undisclosed illness that prevented him from playing in the last two games, “I was able to go through more practice. I felt good. We’ll see what happens (Sunday).”

Deng, who bruised his right hand in Wednesday’s game against the Atlanta Hawks is also doing better, and is likely to make his return to the court on Sunday. Heat coach Erik Spoelstra admitted that Deng was actually cleared to play Friday against the Milwaukee Bucks, but was ruled out prior to tip-off.

This is the first time since 2009 that the Heat has had a losing record at this point in the season. Miami had their third straight loss against the Bucks on Friday, 109-85. Wade managed to put up 28 points and eight assists against the Bucks, while Bosh scored 21 points and grabbed six rebounds. After being out-rebounded 45-20 by the Bucks on Friday, look for Udonis Haslem to work himself into the rotation on Sunday. After being referred to as “one of the better” rebounders in franchise history, Haslem felt the need for correction.

“Best. Not better,” he said. “It’s got to be a relentless type thing. Even when you can’t get the rebound and you have no chance of getting it, you’ve just got to create that habit in your mind. Even me, I didn’t always have it, in high school. I started to develop it a little bit more in college. Then when I got to the NBA, I found out what my niche had to be. It’s just something that we’ve got to keep beating into our minds until we get it, until it becomes a habit.”

While defensive holes remained glaring on Friday, the offense took a steep fall, as they shot a sub-par 44% from the field for the game. With only 7:26 left on the clock, Mario Chalmers scored a three-pointer, marking the first time in the fourth quarter that the Heat were able to make a basket.

“For the past two weeks, we’ve been playing pretty bad basketball, and we had trouble with this team at home, obviously,” Bosh told the Miami Herald, “I didn’t shoot the ball well that night or this night, but I don’t know if we made that jump. We do have guys out and everything and we had different looks, but I’m not sure if we knew what we needed to do to win this game.”

Tip-off is set for 6:00 PM EST and will be broadcast on Sun Sports.
[xyz-ihs snippet=”Responsive-Ad”]