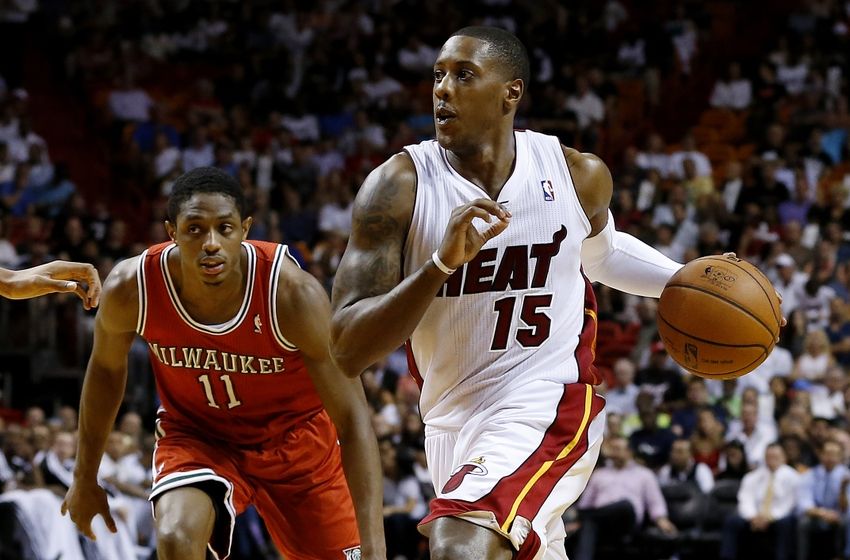 (Miami, FL) — The Miami Heat (5-4) will host the Milwaukee Bucks (4-5) at the American Airlines Arena on Sunday night as they look to get back on a winning track.

The Heat are currently on a two-game losing streak after dropping a home contest to the Indiana Pacers on Wednesday night and a loss on the road to the Atlanta Hawks on Friday night. A lack of rebounding cost the team their game versus Indiana, while the absence of Dwyane Wade and terrible defense led to a loss in Atlanta.

Chris Bosh had plenty to say about the team’s defensive struggles following their loss to the Hawks:

“This defensive system is built on trust, and we’re not there yet. I think that’s obvious. But guys have to take their positions, guys have to know their rotations. They have to know exactly what they’re doing when the ball goes to a certain place. While we did have guys out, and it is tough, I still like winning. I don’t like losing.”

While the offense scored 103 points, the team allowed 114 points on the defensive side of things. Eight Hawks players scored in double-digits as Atlanta shot 56 percent on an NBA single-game high 33 assists.

Miami knows that they won’t be able to win many games playing defense like that, regardless of whether Wade suits up or not. Head Coach Erik Spoelstra stressed the importance of playing team defense and establishing a tone:

“We never got to the defensive disposition and mindset we needed to win.”

The Bucks are in the midst of a Florida road trip following a 101-85 loss to the Orlando Magic on Friday night. The loss ended their two-game winning streak and dropped the team to below .500. The team’s leading scorer, Brandon Knight, scored a team-high 24 points on 9-of-17 from the field with six boards and five assists.

Despite leading Orlando 30-25 following the first quarter, the Bucks started settling for jump shots and were outplayed for the remaining three quarters by the Magic. Milwaukee head coach Jason Kidd stated the following after their loss in Orlando:

“Thirty points in a quarter and then we started settling for jump shots when we’re getting the ball in the paint. When you start to score at that rate, you’ve got to continue to put pressure on them and also you’ve got to knock down shots when you’re wide open.”

If the Heat hold to clamp down defensively, now would be the time. The Bucks have the second-worst offense in the NBA, scoring just 91.9 points per game this season. The team relies heavily on its swingmen to put points on the board. Knight, Giannis Antetokounmpo and O.J. Mayo are the leading scorers on the squad.

Although the team has its offensive struggles, they remain a solid rebounding and stout defensive unit. The Bucks are 10th in rebounds per game and third in points allowed per contest.

Second overall pick Jabari Parker remains one of the team’s top offensive options, ranking fourth on the team with 10.3 points per game on roughly 42 percent shooting.

While the Bucks’ identity as a team is pretty clear, the Heat’s situation with their players aren’t–Wade, Josh McRoberts, Danny Granger and Justin Hamilton all remain questionable for Sunday night’s game due to their assortment of injuries.

Mario Chalmers stated the Heat need to adjust without certain players, especially when it pertains to playing defense:

“We’ve got a new team, so of course it’s going to take a little while. We’re going to keep working on it. Next person’s got to step up. Everybody’s got to learn.”

The Heat will look to adjust as they host the Bucks at 6:00 PM EST on Sun Sports.
[xyz-ihs snippet=”Responsive-ImagenText”]