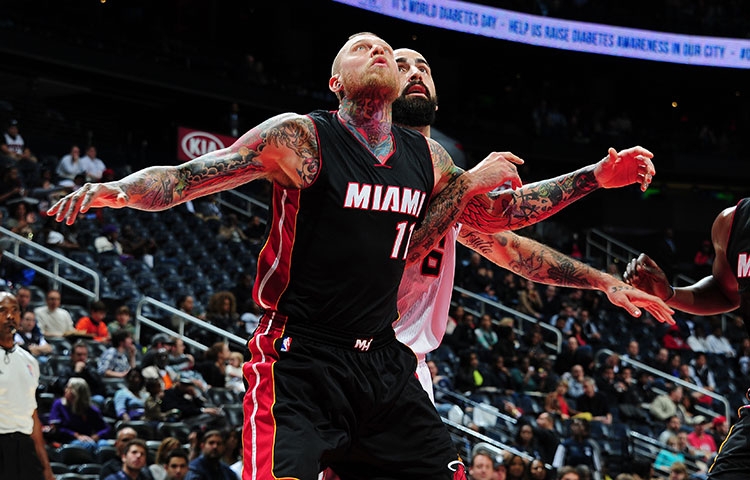 The Heat looked lost and lifeless without their franchise player, who is averaging 19.8 points per game this season. Miami allowed 35 points in the first quarter, as Atlanta started the game on a 12-1 run. The Heat never held a lead at any point during the contest, with the Hawks leading by as many as 19 points in the fourth quarter.

The Hawks executed about as well as they possibly could on the offensive end, as they shot 56 percent from the field on 33 assists. The 33 assists are a team-high for any NBA team so far this year. Eight Hawks scored in double figures, with Paul Milsap and Al Horford leading the charge with 19 points each. Atlanta remains unbeaten at home, as they moved to 4-0 at the Philips Arena.

Miami had a well-balanced attack themselves, as four players scored at least 19 points. Mario Chalmers led the way with 23 points and 11 assists, while Chris Bosh shot just 7-of-19 on his way to 20 points. Shawne Williams continued his excellent start to the season, as he contributed 21 points including five treys.

The Heat looked ineffective as they weren’t just missing Wade, but were also without forward Josh McRoberts, who sat out this game due to a blister on his toe. In addition, Danny Granger and Justin Hamilton continued to sit due to their nagging injuries.

Though the Hawks finished a mediocre 39 percent from beyond the arc, it was their efficient 3-point shooting in the first half and their ability to move the basketball throughout the game that made this victory a dominating effort. Through the first half, Atlanta shot 60 percent from three point range on 7-of-14 shooting.

Sharpshooter Kyle Korver scored 12 points as all of his field goals were from 3-point range. He also had a game-high +17 plus/minus rating.

Erik Spoelstra stressed that the problem was the defensive effort, not the offensive execution:

“Against an offensive team like this we felt that without Dwyane on the road that we scored enough to give ourselves a chance to win. But we never got to the defensive disposition and mindset that you need in order to win against a team like this in this building.”

Spoelstra commented on the Heat’s inability to “impose their will”:

“There were a handful of times where we were unable to impose our will. It takes a tremendous amount of effort, multiple efforts, activity, to be able to defend.”

The Heat trailed the entire game, but they did remain competitive for most of the contest. Williams’ 3 cut the Hawks lead to just 71-66 midway through the third, before Luol Deng’s 3-pointer cut the deficit to just four late in the quarter.

However, Miami became discombobulated during the fourth when two consecutive bad possessions killed the rally. With the Heat trailing by 12 midway through the fourth, two consecutive technicals called on Chalmers and Udonis Haslem led to seven points to give Atlanta a 104-85 lead.

Williams commented on the team’s multiple opportunities to take the lead, but coming up just short each time:

“It was super difficult. We knew coming in it was gonna be tough with Dwyane out. We knew we had to come in and work and just try to do it as a group and we kind of dug ourselves in a hole. It was hard to climb out.”

Bosh echoed a similar opinion to that of Spoelstra’s in regards to the defensive effort being the main culprit:

“While I understand that we cut the lead and everything, I don’t know who we’re kidding by playing defense like that and then expect to stop them. Even if it’s a two-point game and if we take the lead, they’ll probably hit a big shot late in the game because they have a rhythm.”

Heat rookie James Ennis started his first career game in place of the injured Wade and scored just one point in six minutes played. Although Chalmers still came off the bench, he played a season-high 40 minutes versus the Hawks.

The Heat will fly back home as they look to end a two-game losing streak when they play the Milwaukee Bucks (4-5) at 6:00 EST Sunday on Sun Sports.
[xyz-ihs snippet=”Responsive-ImagenText”]