Heat vs. Timberwolves Game Preview: Heat Look to Bounce Back from Ugly Loss 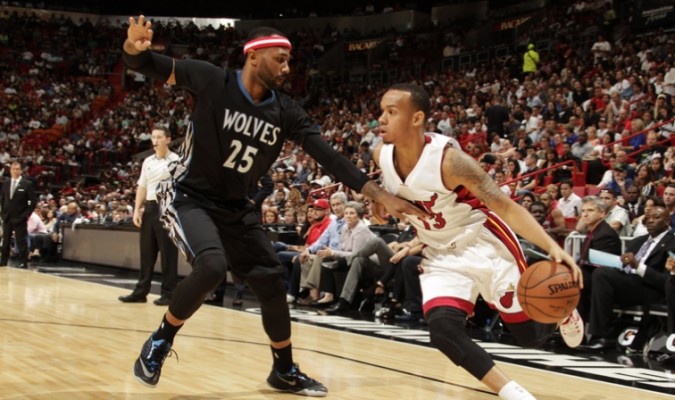 (Minneapolis, MN) — The Miami Heat (21-27) look to get back on track when they visit the Minnesota Timberwolves (8-40) on Wednesday night at the Target Center.

Coming off of their fourth consecutive game without star guard Dwyane Wade, the Heat have split the first two games of a stretch that has the team playing six of their next seven contests on the road.

It will be the second and final meeting between the Heat and Timberwolves — after the Heat beat the Timberwolves, 102-92, back on November 8th, when Wade and forward Chris Bosh sparked a late-game run to win the game.

Missing Wade due to a persistent hamstring injury for Tuesday night’s loss to the Detroit Pistons, the team leaned heavily on Bosh, who scored 21 points in the third quarter en route to 34 points on 14-23 shooting.

On Bosh’s performance, coach Erik Spoelstra said, “That shows one of our guys can have a great game, and if we don’t defend, we don’t win.”

In fact, for the first time since Bosh joined Miami, the Heat lost when he scored 30 or more points.

Young center Hassan Whiteside chipped in with 11 points, 10 rebounds, and five blocks in 24 minutes. Forward Luol Deng, who had missed the previous three games due to a left calf strain, started the game and had 10 points, five rebounds, and three assists.

The Timberwolves, currently on a three-game skid, have also been dealing with a rash of injuries this season. This week, the team welcomed back guards Kevin Martin and Ricky Rubio, both of whom have been sidelined since November.

Rubio posted 10 points, three rebounds, and four assists in 21 minutes in his first game back against the Dallas Mavericks. He will likely be gradually eased back into the starting lineup, reducing the workload of backup point guard Mo Williams and rookie Zach Lavine.

Playing with a minutes limit, Rubio was taken out early by coach Flip Saunders.

Miami has not faced Rubio yet this season, as he suffered his sprained ankle three days prior to the first meeting between the two teams in early November.

Martin, who has been sidelined due to a broken wrist, was averaging 21.5 points on 49.1% shooting before being injured in a game against the New York Knicks where he poured in 37 points on 14/20 shooting.

Following the return of Martin, second-year guard/forward Shabazz Muhammad (oblique) plans to make his return by the end of the week. It is unclear how Saunders’ rotation will evolve to accommodate the players returning from injury, as the team has not been fully healthy at any point this season.

Having dropped 15 of 18 games played in 2015, the Timberwolves have otherwise enjoyed the strides made by rookie guard/forward Andrew Wiggins. Wiggins is averaging 19.8 points, 4.6 rebounds, and 2.5 assists on 47.1% from the field during the month of January, placing him firmly in the Rookie-of-the-Year conversation.

Both Miami (4-6) and Minnesota (2-8) have a losing record in their last 10 games, and both teams have losses to the Oklahoma City Thunder, Charlotte Hornets, and Dallas Mavericks during that span.

After facing each other, the Heat face the San Antonio Spurs, New York Knicks, and Cleveland Cavaliers before an extended nine-day All-Star break, while the Timberwolves face the Memphis Grizzlies, Detroit Pistons, Atlanta Hawks, and Golden State Warriors before the break.

Tip-off is set for 8:00 pm E/T and will be broadcast on Sun Sports.
[xyz-ihs snippet=”Responsive-Ad”]

Jesse has been a fan of the game for as long as he can remember. Having lived all over the West Coast, Jesse’s first encounter with the NBA was growing up in Utah, where he had the privilege of witnessing countless Stockton/Malone pick-and-rolls. These days, he likes to spend his weeknights with NBA League Pass and a tall glass of red wine. Currently completing a Political Economy degree at Tulane University in New Orleans, Jesse has always loved writing, talking, and arguing about basketball (and pretty much anything else), and he is very appreciative of the opportunity to contribute to Heat Nation.