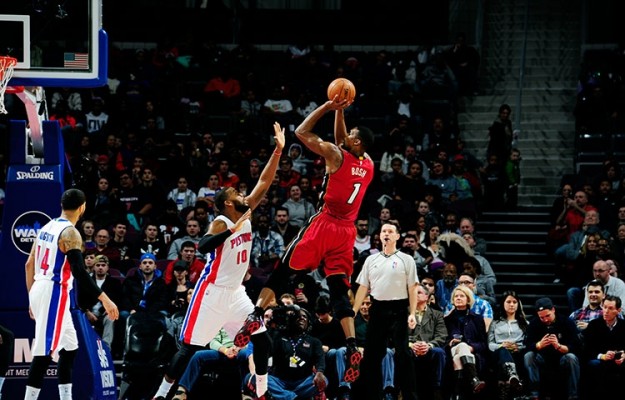 (Detroit, MI) — The guard production from an offensive standpoint took a turn for the worst on Tuesday night as the Miami Heat’s starting backcourt of Mario Chalmers and Shabazz Napier combined for an atrocious one point. No, that is not a typo.

Outside of Chris Bosh, who finished with 34 points on the night including 21 in the 3rd quarter, nobody else provided much help offensively for Miami.

The Heat were torched by second-string point guard D.J. Augustin, who had 25 points to go along with 13 assists for the Detroit Pistons.

“We’re all great players in this league, but it is easier to get going when you know you are going to get a lot of minutes. You can get into the rhythm of the game instead of having to play in bursts,” Augustin said. “This was a team win. Everyone was running the floor, and everyone was playing defense and making shots.”

Augustin’s outburst also speaks volumes to how the Heat’s perimeter defense has been performing as of late. Much of the third quarter was characterized by Bosh and the Pistons’ perimeter players trading buckets.

The Pistons had all five starters score in double figures.

Coach Erik Spoelstra summarized the night perfectly, as the Heat allowed the 21st ranked offense in the league score above 100 points,

“Know what that shows you? One of our guys can have a great game, and if we don’t defend, we have no chance to win.”

Aside from the scoring outburst of Bosh, Hassan Whiteside had another solid night as he had 11 points, 10 boards, and five blocks on the night. However, when asked about the loss, Whiteside took a subtle jab at Spoelstra in regards to his playing time.

“It really wasn’t frustrating. I really ain’t do anything. I just watched the game,” said Whiteside.

Superstar Dwyane Wade‘s presence is being sorely missed as he would immediately fill the two biggest voids in the Heat’s game right now: scoring and perimeter defense.

Miami won’t have any time to ponder on this loss as they will suit up again tomorrow night against the Minnesota Timberwolves at the Target Center.