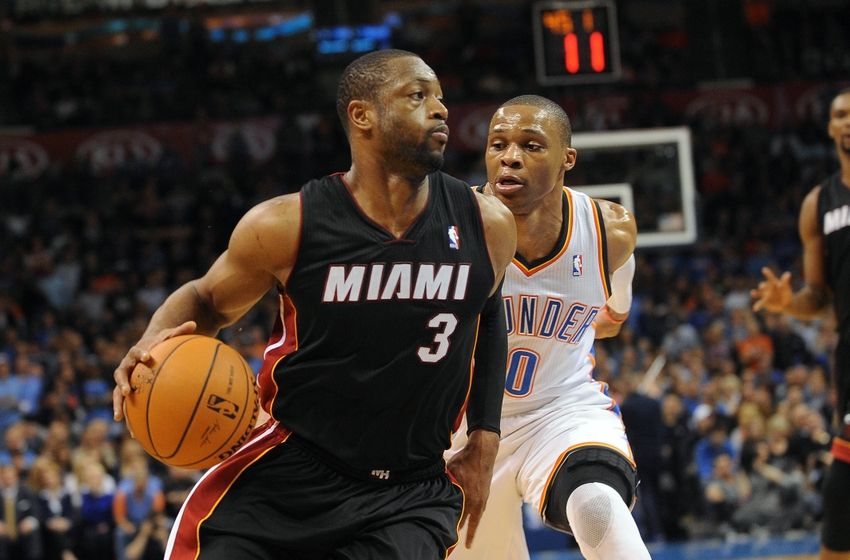 (Miami, FL) – The Miami Heat (18-22) host the Oklahoma City Thunder (20-20) in a matchup of inter-conference rivals on Tuesday night at American Airlines Arena.

The Heat are coming off of a 3-2 road trip which saw the team defeat the Los Angeles Clippers, Los Angeles Lakers and Sacramento Kings in the span of five days. Miami has won four of their past six games, as improved rebounding and better defensive effort has contributed to the team’s winning stretch.

Erik Spoelstra complimented the team’s effort on defense over its last five games:

“Our defense during the five-game stretch was much better. We’re taking a step forward.”

Despite missing Dwyane Wade due to a hamstring injury, the Heat defeated the Kings on Friday night by 12 points and never trailed after the first quarter. They had lost to the Golden State Warriors two nights prior in the absence of Wade.

The veteran shooting guard is expected to return for Tuesday’s game versus the Thunder. Wade practiced for the first time in nearly a week on Monday:

“I knew it wasn’t as bad (as the previous hamstring injury). You still got to be smart. I’m glad I was able to get out there with the guys and not have any pain. Tuesday is the big day to see if I can continue to keep moving forward.”

While the Heat worry about the return of their star player, they’ll also have to accept the reality that another key player will likely be out for tonight’s game—Luol Deng is questionable due to an illness. He missed Monday’s practice and was not around for shootaround before Tuesday’s game versus the Thunder.

As Miami worries whether or not two of their key players will suit up, the Thunder look to move over .500 for the first time this season. The team is coming off of a scorching shooting performance in a 127-99 victory over the Orlando Magic on Sunday night. Oklahoma City scored 79 points on 25-of-32 shooting in the first half alone.

As the Thunder prepare to play five road games over the next nine days, coach Scott Brooks complimented his team’s effort versus the Magic:

“We did shoot extremely well and we did play one of our best offensive games we’ve had all year. We were clicking on all cylinders this time. We haven’t played well in our last three road games, but we came out with a road-trip mentality.”

Kevin Durant and Russell Westbrook continue to pace the team as both players combined for 38 points while sitting out the last 15 minutes of the victory over Orlando. Two nights prior in a victory over the league-best Golden State Warriors, Durant scored 36 points while Westbrook notched a triple-double with 17 points, 17 assists and 15 rebounds.

Following the victory over Orlando, Durant stressed teamwork was the key to victory:

“We started the game with a lot of energy, a lot of effort, the defense was good and we passed the ball really well tonight. Everybody touched the ball….we were aggressive attacking the rim and we found the open jump shooters. We can’t look too far down the road; we’re always worried about today.”

A storyline to watch during the game will be the impact of young players, Shabazz Napier and Hassan Whiteside. Due to the absence of Wade, Napier has started the last two games, as has Whiteside. The rookie point guard has scored in double-digits over his last two games while averaging 5.5 assists. Meanwhile, the 7-foot center continues to be a force in the paint, having blocked at least two shots in nine consecutive games.

Tipoff is set for 7:30 and the game will be broadcast on Sun Sports.
[xyz-ihs snippet=”Responsive-ImagenText”]