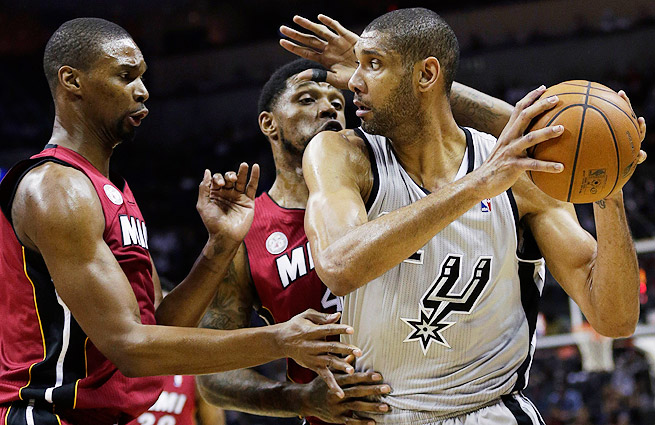 A Miami Heat-San Antonio Spurs series is brains against brawn.

This isn’t to say a brilliant tactician like LeBron James lacks roundball IQ, but rather, it is to emphasize the polarizing nature of both teams; it’s cramming all of the analytics, the storylines, the angles—all of it—into a cute little maxim. When the Heat are at their best, they are like a barrage of artillery—relentless, thrashing, and destructive to opposing defenses. They are brute force; they are, especially LeBron and Dwyane Wade, the paradigm of athleticism when the latter of which is at full health. The Spurs on the other hand won’t tear the rims off the backboards. They won’t always inspire top 10 highlights, and some of their detractors might even say they’re boring. Yes, they aren’t as noisy as Miami, when the Spurs are at their best, they function like a well-trained, highly disciplined Special Forces contingent.

No, they’re not diving out of planes to infiltrate enemy territory, but the Spurs possess a commando-like mindset thanks in large part to their leader. Their de facto Brigadier General is head coach Greg Popovich, and he above all epitomizes their philosophy of breaking the game of basketball down into a war-like science. Popovich is an AirforceAcademy grad who entertained thoughts of joining the CIA, but instead of analyzing topographical maps at Langley, he’s breaking down game tape and inspiring his troops on the hardwood. 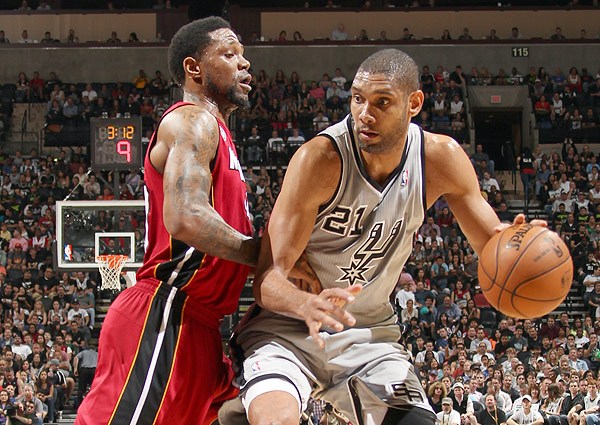 “Tim Duncan is virtually automatic from either elbow, and if he gets close enough on the left block, forget about it.” (Source: Getty Images)

Popovich, in all of his stern, stone-faced basketball wisdom, has to concoct a way to stop a proverbial one man army named LeBron James. LeBron isn’t alone either—he is flanked by a pair of All-Stars, Dwyane Wade and Chris Bosh. Stopping a jack-of-all-trades-type player like LeBron is impossible, but forcing the ball out of his hands is not. In Sun Tzu’s Art of War, he proclaimed, “When you surround an army, leave an outlet free.” This is exactly the type of tactic the Spurs will employ against the Heat. Expect Popovich to try and force the ball into the hands of Chris Bosh and Dwyane Wade—he’d rather the Heat settle for one-on-one or one-on-five situations that are forced rather than organic events within a series of possessions.

Forcing LeBron to give up the ball when he doesn’t want to throws off the entire rhythm of the Heat, and for a team like Miami that thrives off transition opportunities, rhythm is everything. Miami cannot allow itself to be bogged down in the half court against a team like San Antonio that has a lot of lengthy personnel who can deny and rotate their defensive shell with the best of them. The Heat will also have an effective and intelligent frontcourt to battle with, but an opponent with a strong frontcourt is nothing new for Miami.

In Game 7 of the Eastern Conference Finals against the Indiana Pacers, the Heat counter-attacked a bigger frontcourt by smothering them on the catch. Roy Hibbert and David West were absolutely manhandled on all of their possessions, and the Heat need the same type of intensity when defending the Spurs. Tim Duncan is virtually automatic from either elbow, and if he gets close enough on the left block, forget about it. Rather than guys who pound the ball on the floor, the Spurs prefer to use pick and rolls and pinpoint passing. What Miami lacks in vertical height they make-up for in lateral speed and quickness, but Tony Parker, point guard for the Spurs, doesn’t lack quickness whatsoever.

Expect Miami to end up in a lot of mismatches where Bosh has to switch on Parker off a screen, and it will certainly be interesting to see how Heat head coach Erik Spoelstra’s staff decides to defend the screen action as the game progresses.

What makes things more interesting is the fact that both squads deploy a considerable amount of perimeter shooters. Miami was the fourth best three point shooting team in the NBA with 8.8 three-pointers made per game; whereas the Spurs knocked a similar amount with 8.0 per game. The Heat have Ray Allen, Mario Chalmers, Mike Miller, and despite his recent cold streak, Shane Battier can also let it fly from beyond the arc. Despite his struggles in the previous series, Battier might find himself more at home in a series where key charges or intelligence will prevail over power and might. Rather than being forced to guard a David West, Battier will serve more of a purpose as a flex guy who can guard foes all the way out into the perimeter.

If Miami can match San Antonio’s bench output of 37.9 points per game—the sixth best during the regular season, then it will set the odds more in Miami’s favor. Although they had the 14th highest scoring bench during the regular season with 28.4 points per game, they are averaging 33 points per game in the playoffs—the third highest mark of all the postseason teams just behind the eliminated Los Angeles Clippers and Denver Nuggets. The Spurs are only a point worse with 32 points per game from their bench in the post season, but numbers aside, they have on their side a very dangerous not-so-secret weapon. The Heat have sparkplugs off the bench in Norris Cole and Chris Andersen, but neither can match the versatility of San Antonio’s Manu Ginobili. Ginobili has shown to get hot from deep if given enough room, and he’s a brilliant playmaker despite his unorthodox maneuvers.

Sure, the auxiliary players will play a very important role, but oftentimes, when your best players are collectively at their best, it doesn’t matter how else things turn out. Plain and simple, the Miami Heat need LeBron, D-Wade, and Chris Bosh to all play up to their paychecks. The Spurs have arguably the greatest coach of all time at the helm and arguably the greatest power forward of all time, but they are beatable if Miami’s Big Three plays at a dominant level.

Although the Spurs lost two games this season to the Heat sans some important personnel, the NBA Finals is an entirely different war. The Spurs can wreck havoc in transition, but they are at their best in the halfcourt breaking teams down with collective playmaking and shot making. The Heat on the other hand excel in transition perhaps better than any other team in the league—although the Spurs actually outscore Miami 13.7 points in transition per game compared to the Heat’s 11.8 points per game on the break.

The Spurs will be rested, but they also might be rusted. The Heat might still be in rhythm from a tough series, or they might be exhausted.

Analytics, angles, storylines aside, expect Game One to be like opening salvo fired at an opposing force. The first game of any series is a scouting mission of sorts—test the opponents strength, regardless of the results, break down the findings and adjust. Both teams, despite oddsmakers favoring the Heat -220 to the Spurs +190, will play to their strengths and look to come out with their best effort. The Spurs certainly have a challenge in Miami, but Miami can’t exactly expect this to be a walk in the park either. The opening game jitters will eventually subside, and when they do, Game Two is where the real series begins, but for now, Game One will certainly make for a fascinating juxtaposition of two of the NBA’s elite teams.