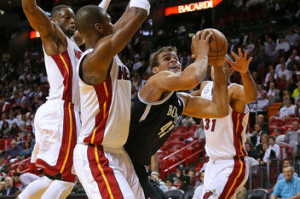 MIAMI, FL - NOVEMBER 07: Kris Humphries #43 of the Brooklyn Nets is guarded by Chris Bosh #1 and Dwyane Wade #3 of the Miami Heat during a game at AmericanAirlines Arena on November 7, 2012 in Miami, Florida. (Photo by Mike Ehrmann/Getty Images)

It was a thing of beauty, on Miami’s first offensive possession, Chris Bosh grabbed the rebound, Mario Chalmers took the outlet pass, found Dwyane Wade leaking out, who then lobbed it up to LeBron James for the alley-oop dunk. Little did we know, this unselfish team-oriented style of offense would traverse throughout the entire game.  James said it best, “No one cares about scoring.  No one cares about shooting. You might have a great shot but there might be a better shot next to you.” The Miami Heat are now 4-1 on the season and look like a team that has been playing with each other for five or six years.  12 different players scored for the home team and seven different players made atleast one three-pointer. Miami finished the game shooting a remarkable 42% from beyond the arc, while the Brooklyn Nets shot a dismal 14% from three-point range.

In the first quarter, the Nets had a strict game plan to post Kris Humphries and take advantage of the Heat’s lack of interior size.  Humphries did just that to score nine points and pull down seven rebounds in the first quarter alone. The Heat only led by four points after one quarter, until a childhood super hero stepped in, Mr. Flash himself, Dwyane Wade.  Wade went off to the tune of 12 points in the second quarter with an array of post moves, dunks, and alley-oops.  He finished the game with 22 points on a super efficient 10-14 shooting to lead the Heat in scoring for the night.
Then came the second half and all hell broke loose.  LeBron James, who finished the game with another near triple-double with 20 points, 12 rebounds, and eight assists, showed us all why the weekly Magic Johnson comparisons are valid and worthy.  James turned the game into a practice session, finding spot-up shooters in Ray Allen, Chalmers, and Bosh and really turned the atmosphere into a pick-your-poison type of environment.  Atleast seven different Heat players made a three-pointer and the scary part is, they didn’t even look like they were trying.

The game got so out of hand that at a point in the fourth quarter one of the Nets’ commentators, Mike Fratello, turned over to his partner, Ian Eagle, and started discussing the fantasy basketball team that he currently had with Greg Anthony.

After the game, Jason Jackson asked LeBron about the Heat’s upcoming 6-game road trip and how LeBron and the Heat were going to handle it.  James replied with, “We wanna keep our same mentality.  We know we cna win on the road, so we gotta go out with a mindset that it’s just us, going with that bunker mentality.”