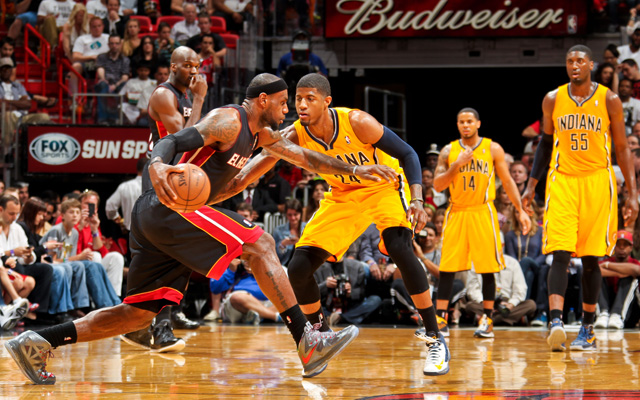 (Indianapolis, IN) — A Miami Heat versus Indiana Pacers Eastern Conference Finals needs no introduction, but we’ll do one anyways. The fact of the matter is, this is the series most of us have been waiting for. Since the opening tip of this season, Heat fans have kept this potential matchup proverbially circled in their imaginary calendars.

Similarly, Pacers fans the world over have deep down known that it would come to this—a slugfest for the ages.

Now although this matchup might not be as Herculean as some might make it, it’s nevertheless the grittiest, nastiest, and hardest fought series we’re likely to see at any level of this year’s postseason.

Coming in at over 1000 pounds of collective brawn and hardnosed toughness, the Pacers have been the most perplexing and argubaly the most scrutinized team in the posteason—even more so than the defending champs.

After falling into an 0-2 hole to the Atlanta Hawks, Indiana battled back to win in seven games against an 8th seeded Hawks team that didn’t even have a winning record for the regular season.

If you thought that was crazy, they traded blowout after blowout with an upstart Washington Wizards squad that looked primed to steal yet another series after being a two-to-one underdog to make it to the conference finals. After looking like they were ready to lose their grip and fall off the cliff, the Pacers kept hanging on.

After rumors swirled about potential locker room rifts and subliminal shots at fellow teammates in the media, the Pacers hunkered down and scraped their way to the Eastern Conference Finals, scratched but not scarred.

As Pacers power forward David West said succinctly to USAToday.com, “It’s only going to get tougher. We’ve been talking about this series all year.”

He, along with his entire team and coaching staff were aware that these were the two squads likely to make it to the mountain top, but becoming king of the hill won’t be so easy when you have a team like Miami squarely in your crosshairs.

That’s because, unlike Indy, the Heat have looked spectacular after sweeping the Charlotte Bobcats, and handily dealing with a Brooklyn Nets team that swept the regular season series in four games only to get eliminated from playoff contention in five games.

On paper, the Bobcats were probably the one squad that should’ve given them trouble, but unfortunately, Al Jefferson, arguably the league’s best low-post scorer, was felled by Plantar fasciitis. Without the one advantage Charlotte had in the series, they struggled to score in what would be a lopsided four games. In the following series against Brooklyn, Kevin Garnett looked to be on his last legs, and Brook Lopez was unavailable as he’s been for quite some time due to foot and ankle surgery.

Fact is, Miami had an easy route to where they are, but it’s not an indictment, but rather a compliment to the Heat’s dominance. LeBron James has looked spectacular. Dwyane Wade is showing glimpses of his youth, and Chris Bosh is showing consistency from the three-point line like we’ve never seen before—especially in the postseason.

Aside from the Big Three, Miami just looks locked in intensity-wise, and they didn’t seem to miss a step in the playoffs, but Indiana has looked disinterested numerous times, and despite their homecourt advantage, they’ve had to take care of a lot of business on the road.

The pressure is on for Miami, and although they’ve looked downright terrible a lot of the times, Indiana is no doubt going to be laser focused for this upcoming series. Don’t expect any rust in Game One because it’s going to be a battle of wills.

The series comes down to one thing: elite perimeter play against a better than average frontcourt, and a blossoming all-star small forward named Paul George. Aside from George, the Heat have to be aware of swingman Lance Stephenson, a rangy wing who’s adept at rebounding and passing, and if he gets his from a scoring point of view, Indiana is tough to beat.

Indiana’s frontcourt duo of do-it-all enforcer David West and goofy and sometimes dominant defensive anchor Roy Hibbert is going to be a huge x-factor. If Indiana can keep the game in the halfcourt, force turnovers, and pound the ball in the paint, they’re going to enjoy a hefty advantage. It’s no coincidence Indiana is 5-0 in games where Hibbert tallies 10 points or more, and that’s because it means the tempo was ideal enough to where Hibbert can meticulously cram his way into in-the-paint angles of attack that make his jumphooks and putbacks easier.

Although Indiana sports a third worst points in the paint per game average of 37 per game, over 60-percent of their offense comes from 2-pointers, and remember, they’re not an explosive scoring team. The lower the score, the more likely the game is in Indy’s favor.

Miami wants to do the opposite of Indy, however. They want to play faster—quick shots, quick makes. Miami was 17th in the league this year with points scored on the fastbreak—much better than 4th worst Indiana. Miami wants to force turnovers, but rather than run sets or post-up, Miami wants fastbreak scoring, and they want to spread the Pacers out with their perimeter shooting. Bosh’s improved marksmanship from beyond the arc is going to be huge in this series

However, (and this is a big “however”) it remains to be seen how Head Coach Erik Spoelstra plans to play this series. He can either start a big like Udonis Haslem and go blow for blow with a big like Hibbert, or he can start Bosh at the five and play small ball with Shane Battier playing the four.

Greg Oden, Chris “Birdman” Andersen, and Udonis are no doubt going to play bigger roles in this series. They’ve all been prepared for this moment, and Udonis is going to have fresh legs for this series. With Miami’s improved frontcourt depth, they should be able to hang in there with Hibbert, West, and even backup center Ian Mahinmi.

Considering their frontcourt is packed with defensive stalwarts, and their perimeter tandem of LBJ and D-Wade is arguably the best in the league, Miami should take comfort in their collective depth and experience. Season series results aside, Miami has beaten Indiana the past two years, and closed out the final games by double digits.

However, defensively, the numbers are tigher. Indiana was the third best scoring defense and they held teams to 92 points on average. On the other hand, Miami held opponents on average at around 96 points per game—which again, if you’ve been keeping up, happens to be Indy’s total points per game.

According to TeamRankings.com, the probability of Miami winning this series in 6 games is around 21-percent, the most likely of any possible series outcomes. The Pacers are 3-to-1 underdogs to win the series, and they open Game One of the Eastern Conference Finals as 2.5 to 3-point underdogs offshore and in most Nevada-based markets.

Just like the oddsmakers predict, Miami expects this year to be no different, but the Heat have to play this series with its back against the wall regardless of what the numbers say. At the end of the day, the game isn’t played out by the number crunchers; it’s the guys on the floor that decide the outcome. Stealing a game or two on the road is a must, and no doubt, beating Indy in their own house is going to be a lot harder than closing it out in the American Airlines Arena, but hey, no one said going for the three-peat would be easy.