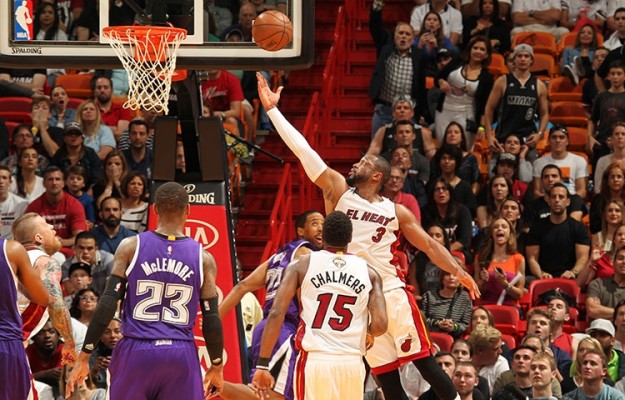 (Miami, FL) – With four starters (Chris Bosh included) inactive on Saturday night, the Miami Heat (28-34) rallied from a 16-point third quarter deficit to defeat the Sacramento Kings (21-40) in overtime by a score of 114-109 at American Airlines Arena.

Even with Bosh, who is out for the season with blood clots in his lung, and the likes of Goran Dragic (held out with a back injury), Hassan Whiteside (sore ankle) and Luol Deng (second straight game missed with a thigh injury) all not able to participate in Saturday’s contest, the Heat played with a ton of heart to statistically put themselves back into the eighth seed in the Eastern Conference.

Despite being shut down for the season, Bosh was quick to praise his teammates for a resilient shorthanded performance against the Kings.

Dwyane Wade was absolutely magnificent down the final stretch of the game and in overtime, as he scored four points in the final 2:35 of regulation and 10 points in overtime. Wade, who missed Friday night’s 99-97 loss to the Washington Wizards with a sore hip, came up clutch with 28 points, four rebounds, four assists and two steals.

“For myself, I think about my buddy Chris (Bosh) back home right now, he would love to be on this floor,” said Wade. “So anything that we’re going through physically, you’ve got a guy that would love to be here by any stretch of the imagination. So you’ve got to put it to the side for these 48 minutes and try to do whatever you can to help your team to get a win, and that’s what each and every guy did.”

Undrafted rookie free agent Tyler Johnson rose to the occasion to contribute 24 points, six assists and six rebounds in 44 minutes off the bench.

“If you look up the word grit, you probably see Tyler’s picture,” said Miami Heat head coach Erik Spoelstra after the game. “He’s earned everything he’s gotten and he’s put in a lot of time and effort behind-the-scenes.”

Even though Kings All-Star center DeMarcus Cousins and small forward Rudy Gay were able to seemingly score at will, the Heat found a way to end up victorious. The duo both scored 27 points, as Cousins had 17 rebounds and two steals while Gay had eight rebounds and five assists.

Michael Beasley, who likely will be re-signed to another 10-day contract after tonight, was a huge factor in Miami’s comeback win. Before he ultimately fouled out near the end of the fourth quarter, Beasley recorded a season-high 18 points and seven rebounds.

“We’re showing perseverance and character,” said Beasley after the victory. “We just have to try and keep this momentum rolling.”

Mario Chalmers, who went over the 100-steal season mark on Saturday night for the fourth time in his career, posted 12 points, seven assists, five rebounds and four steals in a gutsy defensive performance.

The Heat collectively forced the Kings to turn the ball over 20 times on the night as Henry Walker excelled with three blocked shots and two steals to go along with his 11 points.

Kings shooting guard Ben McLemore had one of his better games on the season with 20 points and two steals, while power forward Derrick Williams scored in double figures with 10 points coming off the bench.

Up next on their schedule, the Heat will host the Boston Celtics (25-35) on Monday night in a crucial game for Eastern Conference playoff positioning. The contest is slated to tip off at American Airlines Arena shortly after 7:30 pm ET.
[xyz-ihs snippet=”Responsive-ImagenText”]