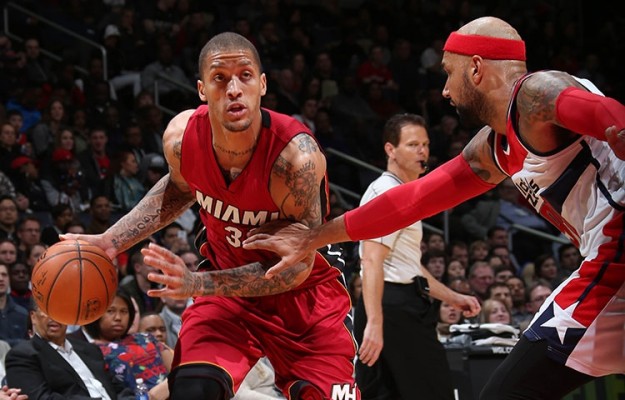 (Washington, D.C.) — The Miami Heat (27-34), playing without star guard Dwyane Wade, small forward Luol Deng and point guard Mario Chalmers, showed serious mettle and managed to turn a laugher through three quarters into a nail-biter in the fourth, before falling to the Washington Wizards (35-27) 97-99.

With the Charlotte Hornets (27-33) and the Indiana Pacers both winning on Friday, the Heat’s loss leaves them on the outside of the playoff picture in the East, at least for now.

Deng was listed as doubtful with a thigh injury earlier in the day and Chalmers was a game-time decision due to a sore knee, but Wade’s absence from the starting lineup was unexpected:

No Dwyane Wade comes as a surprise tonight. Spoelstra mentioned nothing about it at shootaround or before the game.

However, with the Heat hosting the Sacramento Kings on Saturday, coach Erik Spoelstra was likely taking advantage of an opportunity to rest his three veterans on the first night of a back-to-back set.

Wade said as much after the game, telling reporters, “It’s just the NBA season. It’s my whole body. So you pick one when you don’t play.”

Spoelstra said Wade’s sore hip “really didn’t loosen up today the way we thought it would. We decided it wouldn’t be right for him to play.”

The ten players who suited up for the Heat were no match for the Wizards for most of the game. The Heat trailed 40-18 after the first quarter, 67-39 going into halftime, and their deficit ballooned to 35 points with 7:09 left in the third quarter.

But the Heat held the Wizards to one three-pointer and a pair of free throws the rest of the way in the third, while Miami, led by point guards Goran Dragic and Shabazz Napier, managed to cut the Washington lead to 15 heading into the fourth. Dragic and Napier scored 19 points during the run.

Having lost two starters and a major contributor off the bench before tipoff, the Heat would have to try to complete their comeback without Dragic, who went down hard on a foul while driving to the basket late in the third quarter. He left the game with a lower back contusion and did not return.

Dragic told reporters in the locker room: “My back just locked up and I couldn’t move. We’ll see about tomorrow.”

He had a team-high 18 points, seven assists and five rebounds before leaving. The Heat continued to chip away in the fourth quarter, though, led by forward Michael Beasley, who scored 13 points down the stretch to help pull Miami within one point with less than ten seconds to play.

However, guard Henry Walker missed a corner-three that would have given Miami the lead, and after Bradley Beal made one of two free throws on the other end, Beasley failed to get off a shot before the buzzer sounded.

Beasley, who also had two assists and three rebounds in 22 minutes, admitted he “hit a brain cramp” on the Heat’s final possession.

Beasley on the last shot: That comes from inexperience. I was so anxious to do great for my team, I just had a brain cramp. That’s my fault.

Coach Spoelstra was not upset, though: “The biggest thing I tell him is don’t put pressure on yourself. He’ll be fine.”

Rookie point guard Shabazz Napier had a strong game as well, scoring 16 points to go along with four assists, two rebounds and a steal.

While Spoelstra was disappointed in the loss, he was proud of his team’s effort in the second half under the circumstances: “It’s not a moral victory, but I do commend our guys that were on the court and their level of competition. The guys out there earned those minutes.”

Spoelstra added: “What will go unnoticed is that we held (the Wizards) to 30 points in the second half. We did a good job of covering ground.”

The Wizards were led by forward Nene Hilario, who had 20 points, four assists and two rebounds, and guard Bradley Beal, who scored 17 points on six-of-11 shooting. Veteran forward Drew Gooden had 11 points in 17 minutes off the bench.

The Heat will return to Miami to play the Sacramento Kings at American Airlines Arena Saturday night at 7:30 PM EST. The game will be broadcast on Sun Sports.
[xyz-ihs snippet=”Responsive-ImagenText”]