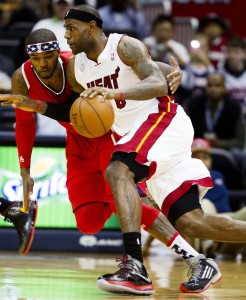 Associated Press, "On a hard drive to the left side of the hoop, James came up limping after colliding with Josh Smith with 36 seconds left in the second quarter."

With Dwyane Wade out with the flu, the Heat rose to the challenge to obtain their first road win of their upcoming six game road trip.  LeBron James and Chris Bosh combined for 45 points and Miami escaped Atlanta with a hard fought 95-89 victory.

For the first time, the Heat failed to eclipse the 100 points scored mark, but battled valiantly in the final quarter.  After Miami opening up a nine point lead with eight minutes left, Jeff Teague connected on back-to-back three pointers tying the game at 85-85.  In attempt to close out the game, Atlanta (2-2) missed two free throws and a layup in the final minute.   Without Wade to take the final shot, James, known for deferring in crunch time situations, nailed a jumper with 16 seconds left giving Miami a 93-89 lead, putting the nail in the coffin for the Hawks.  When asked about the final possession, James said, “Just tried to get to my spot.  Once I got there, just tried to elevate and make the shot.”  After what was reminiscent of a Michael Jordan’s infamous push off on Bryon Russel, LeBron referred to his push off on Deshawn Stevenson as a “lucky stumble.”

James got off to a quick start, scoring 9 of his 21 points in the first quarter, yet the Hawks held their own at home, as the game was tied at 25 going into the second quarter.  Without Wade in the lineup, Ray Allen capitalized on the additional minutes and took advantage of Atlanta’s struggling perimeter defense, adding 17 points by connecting on 3-of-5 from deep.

Bosh had 24 points to lead Miami (5-1) and stepped up in the fourth quarter with eight crucial points.

“It was an all-around great performance by our team,” Bosh said.  “We expect every game to be like this on our road trip and we pulled out a great win.”

Throughout the night, James was guarded ferociously by Stevenson in a feud that was conceived in the 2008 playoffs, in which Stevenson called James the most “overrated” player, when James was still in Cleveland and Stevenson was in Washington.  The rivalry escalated in the 2011 NBA Finals, where Stevenson won a title with the Mavericks by upsetting James’ Heat in six games.  Stevenson had just three points for Atlanta but it was a teammate of his that found himself in a duel with James.

On a hard drive to the left side of the hoop, James came up limping after colliding with Josh Smith with 36 seconds left in the second quarter.  James and Smith both headed straight to the locker room for further analysis of their knee-on-knee collision but returned to start the second half unscathed.  James said, “I mean it hurt at the time, but I knew I’d get through it man.”  In the second quarter, Miami had seven turnovers amassing only 17 points as they trailed 46-42 in a dogfight with Atlanta.

Anthony Morrow, who came over from the Nets in the Joe Johnson trade this summer, had 17 points against the Heat’s second unit.  Jeff Teague led all Atlanta players with 20 points and 11 assists, missing only one shot all game.  Erik Spoelstra referred to Atlanta’s guards as “small guards, lightning quick, and they were in the paint all night long.”

In the fourth quarter, James also surpassed 5,000 career rebounds, finishing with 21 points, 11 rebounds and nine assists, falling just shy of a triple-double for the second straight game.  In a joking manner James commented, “I am cursed.  It was about the 20th time that I was one rebound or one assist away from a triple double.”  The Heat owned the painted area with a dominating 40-26 points in the paint differential, something that has been an issue for Miami that for now, seems to be corrected.

Miami will travel to Memphis for a Sunday matchup with the Grizzlies in their second of six road games with Wade expecting to return to the starting lineup.