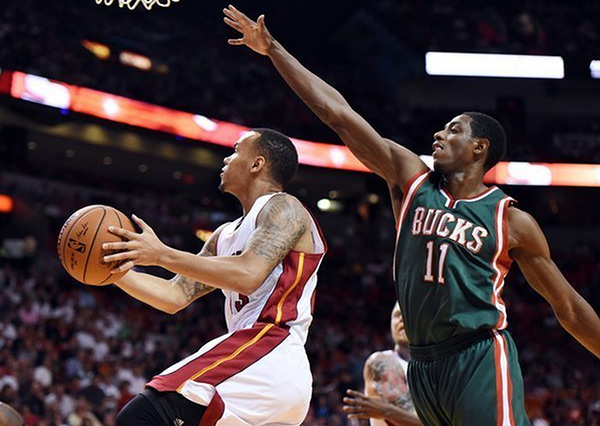 The Heat currently hold the seventh-best record in the East, while the Bucks have the sixth-best mark in the conference. Miami is coming off of one of their best victories of the season, having defeated the Chicago Bulls by a score of 96-84 at the United Center in Chicago. Hassan Whiteside had the first triple-double of his career when he blocked 12 shots along with scoring 14 points and grabbing 13 rebounds in the win. The 12 blocks established a new franchise-high.

Whiteside stated after the game “it’s a blessing” to even be playing in the NBA:

“It’s a blessing. Like I told my teammates, you won’t believe how things work out in life. Three months ago I was at the downtown Y just chilling, working on my game. I couldn’t get a team to pick up the phone.”

Now the 7-foot center may be the missing piece that lifts the Heat from a below-average team to one that can do some damage in the second half of the regular season.

Chris Bosh is happy for Whiteside, but stresses that he needs to stay grounded:

“What he’s doing is, of course, more than I expected. But I kinda saw the fit (after he signed). He’s just playing at a high level right now. I just want him to stay grounded, just continue to work.

The Bucks may have something to say about that, however. Milwaukee is looking to extend their two-game lead over the Heat in the standings. Not only are the Bucks up on Miami in the record column, but they have already defeated the Heat twice this season—91-84 on November 16 at American Airlines Arena and 109-85 on December 5 at the Bradley Center.

Despite having one of the worst records in the NBA at just 15-67 last season, coach Jason Kidd has turned Milwaukee into a playoff-caliber team in his first season on the job. Kidd stated that his team “is ahead of schedule” in regards to expectations entering the season:

“We wanted to be a team, and try to create the atmosphere of playing as a team, and we’re probably a little ahead of schedule.”

With No. 2 overall selection Jabari Parker out for the season with a torn ACL, the team has struggled to score the basketball. They rank 20th in the league in scoring with just 98.2 points per game, and are led by Brandon Knight’s 17.9 scoring average.

One of the team’s veterans, O.J. Mayo, feels that the team is in high spirits because of their .500 record. But at the same time, he warns his team of not feeling too good about themselves:

“We watched film and paid attention to the little details to help us get better. That’s all we can ask for as a young team, to get better. We kind of feel like we’re on a high horse because we’re in playoff position now, but it’s half of the season.”

Although the Bucks struggle to put the ball in the basket, they excel defensively, ranking third in the NBA in defense. The unit allows just 97 points per game.

Milwaukee is coming off of two road games during the weekend—a 101-86 victory over the Detroit Pistons on Saturday and a 101-95 loss to the San Antonio Spurs the following night. The Bucks’ visit to the AAA will mark the final game of their three-game road trip.

Following victories over the Indiana Pacers and Bulls over the past four days, the Heat will be looking for their first three-game win streak since starting the season 3-0.

Tipoff is set for 7:30 pm EST and the game will be broadcast on Sun Sports.
[xyz-ihs snippet=”Responsive-Ad”]