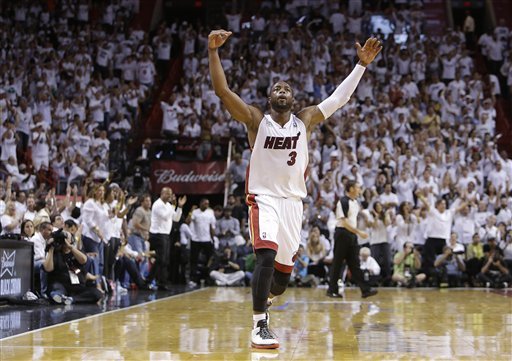 The Eastern Conference Finals embodied a heavyweight bout between the defending champions and the physically imposing challengers.  Advantage?  Experience and talent.

The Miami Heat are in the same situation for the third consecutive year.  Since the formation of the “Big Three,” the Heat are once again Eastern Conference Champions with a chance to win a title. 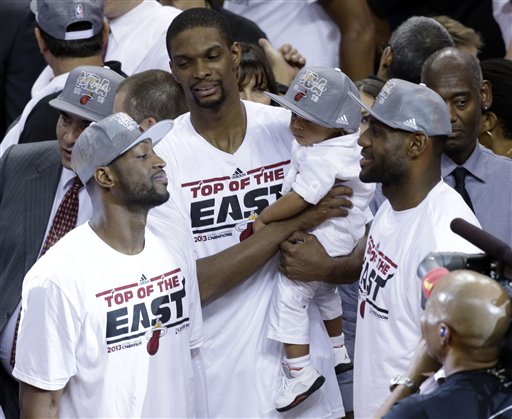 The Big Three are headed to the NBA Finals for the third time since 2010. (Image via Yahoo Sports)

With a decisive 99-76 game seven victory in front of a “White Out” crowd in South Beach, the Heat are four wins away from repeating as NBA champions.

“Everything that happened in the first six games meant nothing to us,” Wade said.  “It was about game seven, it was about finding a way to win here at home.”

LeBron James rose to the occasion, leading his team with 32 points, eight rebound and four assists in a valiant effort.

For the entirety of the series, the combination of Roy Hibbert and David West inhibited the Heat from finishing at the rim.

However, the relentless attacking nature of the Heat garnered five fouls on Hibbert by the third quarter, which allowed Miami to drive to the lane at will and overwhelm the Pacers.

“You never want to take anything for granted,” Dwyane Wade said.  “Being here three straight years, going back to the NBA, it’s an amazing feat.”

Despite his ailing knee injury, Wade defied father time, returning to his “Flash” persona, getting to the rim at will.  He finished with 21 points and grabbed nine rebounds.

“It’s game seven, you have to give everything you got…my confidence just kept growing,” Wade said.

Struggling to find his grove against the imposing Hibbert, Chris Bosh started the game making only one of his first nine shots in the first quarter and managed only nine points total.

“The consistent defensive pressure, for the first time all series we were able to apply that,”

Throughout the regular season, Miami finished dead last in rebounds and despite their inferior size to Indiana, the Heat outrebounded the Pacers 43-36, with 15 of those being offensive.

An integral part of the Heat’s run, Ray Allen regained his confidence in his shot and added 10 points off the bench.

The Heat built a 39-29 lead with 5:53 remaining in the second quarter, capped off by an 11-2 run, all with Hibbert and George Hill on the bench. The momentum continued in Miami’s favor and the Pacers were unable to overcome the deficit.

Hibbert finished with 18 points and eight rebounds but did not control the paint defensively as in past games this series.

With Paul George stifled by James’ suffocating defensive effort, Lance Stephenson did all he could to alleviate some of George’s offensive duties, adding 10 points, six rebounds and five assists.

“The competition brought out the best in us,” Spoelstra said.  “These guys love these types of moments.”

Miami is 7-2 at home during the playoff run and will look to capitalize on their home court advantage in the finals.

Specifically, James will be seeking redemption in the quest to repeat as NBA Champions.

In 2007, James, a member of the Cleveland Cavaliers, was swept by the San Antonio Spurs in the NBA Finals, lacking a supporting cast to overcome the talent and experience of the

NBA Finals.  Miami will host game one of the NBA Finals beginning Thursday

“Our game plan will not change,” James said. “We disrupt, we fly around, we help one another, and we share the ball offensively.”

NBA fans and the media have mocked James and his infamous words proclaiming a dynasty during the celebration of the formation of the “Big Three” in 2010.

For now, Miami is ready to clinch number two; their second NBA title in three years.

“At this point there aren’t any weaknesses,” Wade said. “We are going to the finals; it’s the two best teams, San Antonio and us.”