The Miami Heat will conclude their three-game home stand by getting their first look at the newly formed Brooklyn Nets on Wednesday night.

The Nets (1-1) got off to a nice start to their inaugural season in Brooklyn with a 107-100 win over the Toronto Raptors, but they came crashing back to Earth on Monday in a 107-96 home loss to a Minnesota Timberwolves team without Kevin Love and Ricky Rubio. 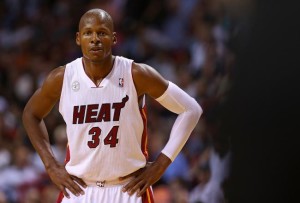 Getty Images, "While the Nets’ offense will be a good test for the Heat defense, the Miami offense versus the Brooklyn defense appears to be a mismatch on paper, especially given how dominant the Heat’s attack has been at home."

In that game, Brooklyn jumped out to a big early lead and was up by as many as 22 points before Minnesota stormed back, scoring the final 11 points to close out the game.

It was a disheartening loss for a Nets team eyeing a return to the playoffs this year, but the Heat won’t be taking Brooklyn lightly given the talent of the team’s newly-constructed roster.

Miami coach Erik Spoelstra said that this year’s Nets have a completely different look than the team that finished 12th in the Eastern Conference standings a year ago.

“It’s not a comparison,” he said. “Not only were they a different team, but they were injured. They were absolutely depleted. We know who they have. We have respect for the moves they made during the off-season.”

Brooklyn brought in All-Star shooting guard Joe Johnson to fortify the backcourt, but the two biggest moves of the summer were the re-signings of center Brook Lopez and point guard Deron Williams.

Williams’ signing in particular helped pave the way for the Nets to put together a roster that has the look of a legitimate playoff contender.

Given the Heat’s struggles with top point guards in the past, Williams will be given special attention by the Heat coaching staff.

“We’ll treat him with the absolute respect he deserves as one of the best point guards in the league,” Spoelstra said.  “He deserves the respect of trying to apply pressure to him, changing schemes … you can’t give him the same look every time down the floor.  He’s too smart, too savvy, he has too much experience, and his skill set is too good.”

“He’ll pick you apart either with his scoring or passing. He deserves the whole kitchen sink of our defensive scheme, and that’s the activity, the ball pressure, trying to take the ball out of his hands at times. But it’s a whole lot easier said than done with great players.”

Brooklyn brings one of the best offensive lineups in the league to the game, ranking No. 5 in offensive efficiency through two games and averaging 101.5 points per game.

But as many predicted before the season, the Nets’ defense has looked shaky to start the year, ranking second to last in defensive efficiency so far.

The Heat rank just one spot above them at the moment, but Miami showed signs of playing the kind of defense it has become known for over the past two seasons in Monday’s 124-99 win over Phoenix.

The Nets will provide an even bigger challenge to the Heat defense with its dynamic backcourt as well as the 7-foot Lopez, who is one of the more talented offensive big men in the game.

Lopez comes in leading the Nets in scoring with 20 points per game to go along with seven rebounds, with Williams averaging 18.5 points and 11 assists.

Johnson is putting in 16.5 points per game to go along with three assists and three rebounds through two games with his new team.

“They somewhat did an overhaul,” Heat guard Ray Allen said of the Nets.  “It does change a little bit of who they are.  They’re in a different position than they’ve been over years past.  But we know who they have.  Personnel-wise, it doesn’t change how we play them. Our job is still the same.”

While the Nets’ offense will be a good test for the Heat defense, the Miami offense versus the Brooklyn defense appears to be a mismatch on paper, especially given how dominant the Heat’s attack has been at home.

Miami has scored 119 or more points in all three home games, and have made 33-of-67 from the three-point line in its home gym.

Allen, who has made 11-of-17 from long distance at home, said that the team’s offensive success can be attributed to its balance, spacing, and unselfishness.

“I’m getting open looks. Defenses can’t shade to me as much as they have in years past,” he said.  “With LeBron (James) on the floor, that has an effect.  With Dwyane (Wade) on the floor, that has an effect.  The talent is so immense for the opposing team, and we make enough passing plays for our teammates that it’s hard for the defense because they don’t know what to stop and who to guard.”

However, the Heat are still looking to get themselves in gear at the other end of the court after three sub-par defensive efforts to start the season.

Allen said that the players and coaches are aware of the work that needs to be done to get better at getting stops.

“Defensively, communication is something we talk about all the time on the bench and something we stress,” he said. “Everybody has pride to be a better defender. There’s a great responsibility that we place on each other defensively that when we go to the bench, Spo doesn’t have to say anything.  We put the pressure on ourselves.”

After playing Brooklyn, the Heat will play six straight road games starting with Atlanta on Friday and ending Nov. 17 at Phoenix.