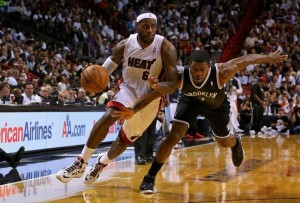 Getty Images, "After a somewhat sluggish start to the season, the Nets have surged toward the top of the conference, going 10-2 since a 103-73 loss to the Heat in Miami on Nov. 7."

Two of the best and hottest teams in the Eastern Conference will lock horns Saturday night when the Miami Heat (11-3) play host to the Brooklyn Nets (11-4).

Both teams bring five-game winning streaks into the game, and the winner will sit atop the Eastern standings after the game.

After a somewhat sluggish start to the season, the Nets have surged toward the top of the conference, going 10-2 since a 103-73 loss to the Heat in Miami on Nov. 7.

Since that game, Brooklyn has lost only to Golden State and the Los Angeles Lakers on the road, while notching victories over the Los Angeles Clippers, New York Knicks, and winning twice over the Boston Celtics.

Surprisingly, the Nets have been doing it mostly with defense, holding 10 of their last 12 opponents under 100 points and climbing up to No. 8 in the NBA in defensive efficiency.

Brooklyn is also sixth in the league in offense, averaging just over 109 points per 100 possessions.

However, the Nets will be without a key figure in their early season success, as 7-foot center and leading scorer Brook Lopez will miss the game with a right foot sprain.

Lopez is averaging 18.5 points per game on 53.4 percent shooting, so the Nets will have to find a way to replace his interior scoring.

Brooklyn had little trouble making up for the loss in a 98-86 win over Orlando on Friday night, with Andray Blatche stepping in and putting up 14 points, nine rebounds, and three assists in a starting role.

Reserve forward-center Reggie Evans also collected 10 rebounds to give him double digits in that stat for the sixth time in the last seven games, all in a reserve role.

Joe Johnson scored 22 points in the win over the Magic, and the former Hawks guard has started to come on after a slow start with his new team and is averaging 15.8 points per game, good for second on the team.

Star point guard Deron Williams has seen his offensive numbers go down this year, averaging the fewest points since his rookie year (15.7), and shooting under 40 percent from the field and under 30 percent from three for the first time in his career.

But Williams is still averaging 8.7 assists per game, which is fifth best in the NBA, and has six games of double digit assists this season.

Williams and the rest of the Nets struggled mightily in the first meeting with the Heat, shooting just 37 percent from the field, making 3-of-21 from deep, and turning the ball over 19 times.

It was a rare blowing victory for the Heat, who have made a habit of playing to the level of competition and finding themselves facing late deficits only to use big late game runs to pull it out in the end.

The latest example was Thursday night’s 105-100 win over the San Antonio Spurs, who despite sitting regulars Tim Duncan, Tony Parker, Manu Ginobili, and Danny Green, pushed Miami to the brink and held a 98-93 lead with just over two minutes to play.

But the Heat finished on a 12-2 run, with Ray Allen’s three-pointer with 22 seconds left putting the Heat up for good.

It was a virtual replay of the Heat’s previous home win over a Cleveland team without Kyrie Irving, as Miami closed on a 9-0 run to erase a 108-101 deficit, with another go-ahead Allen three-pointer with 18 seconds left proving the difference.

It was Allen’s third game-winning triple in the final minute this season, with all three coming on assists from LeBron James, who in Allen has found perhaps his greatest weapon against double teams of his career.

“We trust anyone who is in the game.  All 15 guys on the roster are here for a reason, but it’s great to have a guy like Ray on the floor who can make shots whether it’s the first or the fourth quarter,” he said. “It’s a luxury to have.  He’s making me look good, and I’m trying to make him look good. I’m passing it to him and he’s making the plays.”

The Heat would certainly prefer to avoid falling into the same trap of needing desperate fourth quarter rallies to win, but should the scenario present itself again Saturday, they’ll no doubt have the confidence to believe they’ll prevail once more.

“It’s a sense of knowing we can win under certain circumstances, especially late in the game,” James said.  “We know we can win games.  We don’t want to put ourselves in that position, but it’s good to know we have that experience to do that if it happens.”

James has been a model of consistency for Miami this year, scoring 20 or more points in all 14 games this season.

He’s averaging 25 points, 8.9 rebounds, and 6.5 assists per game this season to lead the Heat in all three categories, while also shooting 53.3 percent from the field.

Chris Bosh is second on the team in scoring and rebounding at 20.1 points and 8.4 rebounds per game.

The Heat will be without starting forward Shane Battier for the second straight game as he rests a sprained MCL.