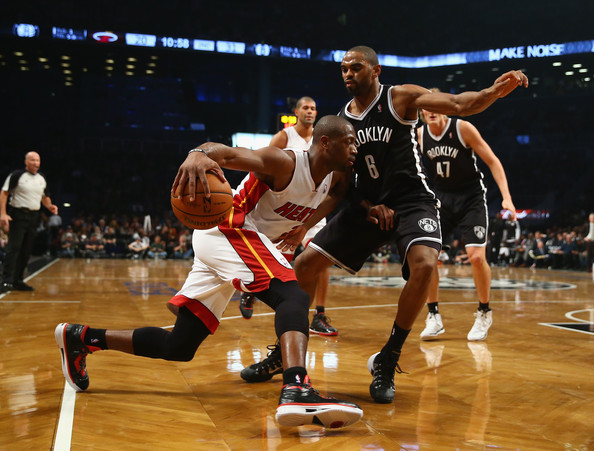 (Miami, FL) — After a first round filled with twist and turns and overtime games galore, Heat fans were delighted their squad’s second round debut was a “borefest” in the waning moments of a 107 to 86 victory over the visiting Brooklyn Nets. While there were moments of drama, as the game went on, it never seemed to be in doubt that we would see the Heat cruise past the Nets in Game One.

Following a keyed up start to the game, Miami assumed a mere two-point lead as the horn sounded to end the first quarter. Brooklyn managed to keep it close as many thought they would. Their jumpers were falling, and the three-point shot—an area of focus of BK—seemed to be treating them well. At one point, BK was up 7-2, and as their reserves rose to their feet in celebration, the Nets seemed to feel as if their 4-0 regular season sweep of Miami was no fluke.

After appearing just as languid as they did in the regular season, Miami took the opening jabs in stride and landed a straight overhand right. Overcoming a string of tough possessions, Miami flexed their defensive muscle and appeared to have overcome their tumultuous start in the opening minutes.

After draining a tough three-pointer to close the half, Deron Williams capped off a 14-6 run that started at the 3:03 minute mark. At this point, Brooklyn had played a virtually perfect game. Shots were falling, they were snagging extra possessions on the glass, and they seemed motivated but not fatigued as many assumed they’d be following a tough Game Seven win over the Toronto Raptors.

The pace of the game wasn’t anything remarkable. After a nice first half, Brooklyn looked deflated in the second half of the game. They didn’t closeout as tough as they did in the second, and there was a lot of standing and watching on the defensive end. Miami looked like the tougher team tonight, and they eliminated Brooklyn’s three-point advantage by essentially equalizing their perimeter output themselves considering Brooklyn only hit one more additional three-pointer.

Brooklyn sunk ten three-pointers, but Miami nailed nine trey balls of their own. Miami also exploited slow rotations from Brooklyn with precise passing on pick-and-rolls. It just wasn’t a particularly exciting game, but it was a dominating win from Miami.

Brooklyn still appeared drunk (proverbially, of course) from the Game Seven stupor that comes from fatigue in a hard fought series like the one they experienced against Toronto. Toronto is a young, scrappy, and athletic team. They softened Brooklyn up. With wings like LeBron James and Dwyane Wade, imagine Toronto’s scrappiness and athleticism with a mix of veteran experience and toughness.

It’s just going to be an uphill battle from here on out for Brooklyn. Former Celtic “Big Three” member Ray Allen tallied 19 points against Brooklyn and two of his former colleagues, Kevin Garnett and Paul Pierce, the former of which went scoreless for the contest with two shot attempts all game.

After seeing their energy level throughout the game as well as their body language, you question how much Brooklyn really wanted to win this. With Garnett and Pierce only playing a combined 45 minutes of playing time, you can tell head coach Jason Kidd was willing to concede this first game in order to preserve their energy for Game Two in Miami, and a very key Game Three in Brooklyn. Joe Johnson and Deron Williams performed well with a combined 34 points on effective shooting, and Miami’s Big Three combined for 51 points in total.

Dwyane looked swift and in control of his motion, and LeBron gave them spurts of energy when the squad needed transition buckets off of Brooklyn turnovers. Chris Bosh finished with contact multiple times, and he drained the wide open, back breaking shots Miami needed to string along momentum swinging runs. It was a flawless game from Miami for most of the second half.

It’s only one contest, but Miami showed why regular season matchups aren’t always good prognosticators of future games. Kevin Garnett and Paul Pierce are sluggers; they’re not going to go down without a fight, and neither will the rest of the Nets. Miami didn’t blink in this Game One, but we’ll see how much pride BK has for the next contest.