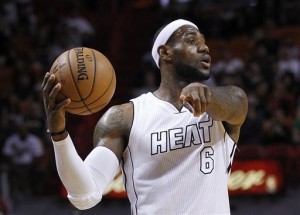 Associated Press, "The winner of Monday’s game will stand alone at the top of the division, and while that means very little for a December game, the quality of the opponent will provide Miami a greater measure of any progress made since the back to back losses to Washington and New York."

After snapping a two-game losing streak with a 106-90 win over the New Orleans Hornets, the Miami Heat will get a far stiffer test Monday night when the red-hot Atlanta Hawks come to town for a big Southeast Division matchup.

The winner of Monday’s game will stand alone at the top of the division, and while that means very little for a December game, the quality of the opponent will provide Miami a greater measure of any progress made since the back to back losses to Washington and New York.

“It’s always fun and it’s a divisional opponent playing some good basketball.  They’re a really good team,” Heat forward LeBron James said of the Hawks.  “They’ve got three point guards that are really quick with Lou (Williams), Devin Harris, and Jeff Teague.  Those guys really speed the tempo up, and they’ve got an All-Star in Al Horford and Josh Smith is playing at a high level.

“We have to do a good job of slowing their point guards down, contain the point of attack, and put a little pressure on those other two guys.”

Not much was expected out of the Hawks coming into the year after they traded away their long-time All-Star guard Joe Johnson to Brooklyn in what was essentially a salary dump.

The fast start to this season has surprised many, though not Heat guard Dwyane Wade.

“No, I’m not surprised. Obviously they have Al Horford and Josh Smith, who took a big step forward last year and showed he can be a leader on that team,” Wade said.  “With the guys they brought in, they’ve got quick guards like Lou Williams and Kyle Korver is a problem with how he can shoot the ball.

“They’ve got a good team.  They know what they’re doing up there.  We’ve got to be prepared. It’s going to be a tough game.”

Atlanta is coming off of one of the more impressive wins for any NBA team this season, beating the Memphis Grizzlies 93-83 Saturday night on the road.

The Hawks got big performances from their two stars, with Smith going for 24 points, eight rebounds, four assists, and three steals, and Horford putting up a 19-point, 14-rebound double-double.  Atlanta also got 21 bench points from Williams.

Perhaps most noteworthy was holding the Grizzlies to 83 points on 42 percent shooting.

Atlanta is currently ranked sixth in the NBA in defensive efficiency, limiting teams to just over 101 points per 100 possessions.

Offensively, the Hawks haven’t been quite as good thus far, ranking 14th in offensive efficiency in scoring just over 105 points per 100 possessions.

The Heat are third in the league offensively at a shade under 112 points per 100 possessions, but it’s the defense that continues to be the prime area of concern for Miami.

Despite posting its second sub-100 defensive rating in the last four games, Miami still ranks 24th in the NBA in defense.

However, Heat coach Erik Spoelstra praised the team’s effort and activity after the game, and James called it a “good step in the right direction.”

“We came out with the mindset that we wanted to defend and we did that,” James said, adding that the team was not disheartened by the Hornets’ 10-of-12 shooting start to the game.  “We just kept with our principles, kept hammering home what we wanted to do, and the second unit did a good job of giving us a second burst.”

Leading that second unit on the defensive end was Joel Anthony, who blocked three shots and was a +10 in just 14 minutes of action.

Anthony was also one of only two Heat players to end in the plus category in the loss to the Knicks on Thursday night.

After starting the season on the fringes of the rotation, the 6-foot-9 shot blocker has reemerged as a regular, playing double digit minutes the last two games for the first time this season.

“We need him,” James said of Anthony.  “He’s one of our anchors to our defense on our back line.  He’s able to clean up a lot of what we have on the perimeter.  To have him back in the rotation is a good thing for our team.”

It was also nice for Miami to get a prime performance from Wade, who struggled mightily in the loss to New York, scoring 13 points on 3-of-13 shooting and finishing with a career worst plus-minus of -33 in 31 minutes.

But it was a different story for the eight-time All-Star on Saturday, as Wade made 9-of-12 shots and 8-of-9 free throws for 26 points.

“He’s playing well,” James said of Wade.  “He got into a good rhythm and made some outside shots.  He looked like himself.  He just has to continue to be aggressive and pick his spots. We’re not worried about if he’s up or down; he’s going to play well and give us a chance to win games every night.”

Miami will finish the week out with two more home games, taking on Golden State on Wednesday and Washington on Saturday.