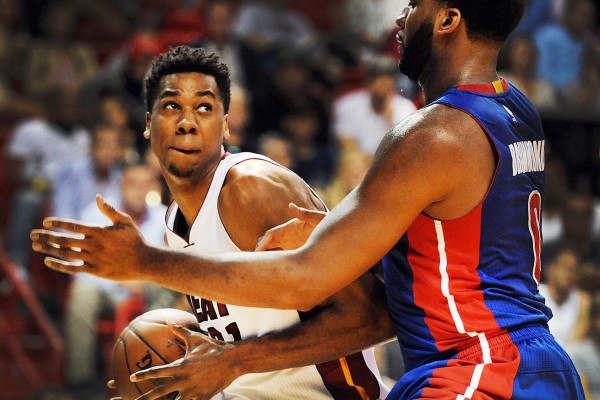 Coach Erik Spoelstra has a completely new roster and from all indications, he’s going to have the Miami Heat playing with a new style this season.

Moving away from an offense that was centered around Dwyane Wade might be a challenge, but Spoelstra has proven, if anything, that he can reinvent how his team plays on the fly. He has shown in the past two seasons that he has a plan if the star forward Chris Bosh is not cleared to play. And this time, he’s had the whole offseason to develop a system that can produce solid results.

The roster without Bosh will have only two returning starters: Goran Dragic and Hassan Whiteside. This is a positive for the Heat because after the All-Star break last season, both Dragic and Whiteside played well together.

Dragic averaged 17.3 points, 6.7 assists, and 4.6 rebounds in 28 games after the break last season. During the same stretch, Whiteside averaged 17.5 points, 13.3 rebounds, and 3.4 blocks per game. The two built some chemistry which allowed them to play well off of each other’s strengths.

“But now after the All-Star break I’m looking for that lob more and I’m feeling more comfortable with him. I’ve never had big guys like Hassan to throw lobs to. It was a challenge for me to work on it, but he’s setting really good screens and I’m trying to find him every time. It’s working so far.”

But in the NBA, as is true for many things, nothing works forever. The point guard and big man will have teams game-planning to specifically break up their connections on the court. That means traps for Dragic and double-teams for Whiteside in the paint should be expected.

Wayne Ellington, a career 37.6 percent 3-point shooter, is hoping to capitalize on this opportunity. Dragic will be able to find the open shooters, like Ellington, but if Whiteside can use his presence to draw multiple defenders and find open shooters, we could see the Heat offense rise to a whole new level.

The problem is, however, Whiteside is one of the worst passing big men in the league. According to Ira Winderman of the Sun Sentinel, Whiteside ranked 80th among centers last season in points created off assists, at 0.9 per game. Considering there are only 30 teams in the league, 80th is not a place the Heat’s franchise center should be in any category.

It’s unfair to put the blame solely on Whiteside for his poor assist numbers because when he did pass the ball out of the post, there usually wasn’t a reliable shooter to knock down the shot. The Heat were one of the worst outside shooting teams in the league last year (27th in 3-point shooting). And even though this was a disappointing offseason for the Heat, Pat Riley was able to salvage what was left of it by bringing in some much-needed shooting. Along with Josh Richardson and Ellington, the addition of Luke Babbitt, a career 40.3 percent 3-point shooter, should provide some reliable outside threats for the Heat.

“That’s something big for us,” Ellington said about connecting with Whiteside. “And being able to get on the same page with Hassan and the other big guys is crucial. Gaining that attention and defenses being so focused on him, being able to go out and find the open guys is going to be huge for us.

“A lot of times, it’s not even that one pass that the big man is going to make directly to the shooter. A lot of times it’s the next pass to the shooter. Just being able to read the defense, I know that’s something that he’s definitely working on this summer,” Ellington said.

The sequence that Ellington is referring to will only happen if Whiteside is able to make the correct read and pass. That’s one of the skills that Spoelstra wants his big man to keep working at.

“Low-post scoring, that’s the number-one thing he wants to work on, and I’m all for it,” Spoelstra said. “He will also work on his skill level at the top of the floor, handling the ball, getting us into second situations as a playmaker, rebounding off the glass.”

These improvements will all make Whiteside the center of attention, no pun intended, and his touches will surely go up. Hopefully, that means the star center will feel free to facilitate his teammates knowing that the ball will find its way back into his hands, eventually.
[xyz-ihs snippet=”Responsive-ImagenText”]