Why Erik Spoelstra Deserves to Be Coach of the Year 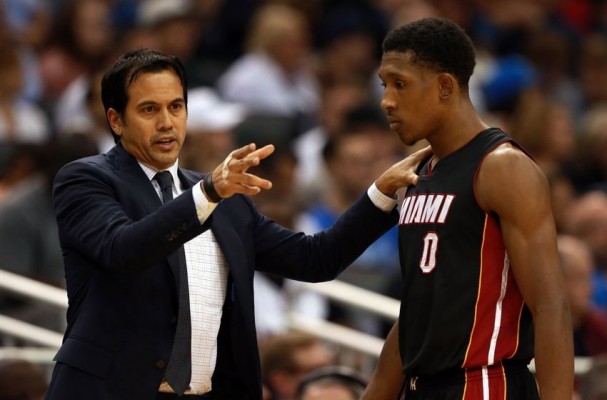 Soon, the NBA will name the Coach of the Year for the 2015-2016 season. This year the competition will be more fierce than it’s been in recent years. Miami Heat fans will be rooting for head coach Erik Spoelstra to get the award he’s so rightfully deserved for years now. But as always, the long-time Heat coach has been overshadowed by a list of NBA coaches who have had strong seasons as well. Still, it’s time to give Spoelstra the credit he’s earned and an overdue, deserving case for Coach of the Year.

Spoelstra, 45, is the second-longest tenured coach in the NBA behind the illustrious Popovich. The eight-year head coach has a career regular season record of 399-241 and playoff record of 65-36. Most importantly, Spoelstra has led the Heat to two championships (2012 & 2013) on top of four consecutive trips to the NBA Finals.

Yet, Spoelstra never gets credit for that, instead the excuse is that he had LeBron James. Fair, but even the fact that he flipped the 15-67 Heat in 2007-08 to 44-38 the first year (2008-09) he took over is forgotten. Both of those phases could be broken down to portray how vast of an impact Spoelstra had on those teams but that’s a different article for a different day.

That’s why this year was so telling for Spoelstra and his staff. With leading scorer Chris Bosh lost for the second consecutive season and Miami’s roster stripped to only two point guards due to transactions that saw Mario Chalmers, Beno Udrih and Brian Roberts shipped out and Tyler Johnson (shoulder) out for the season, the championed coach made his mark.

Spoelstra made the boldest move of the season in moving Hassan Whiteside, an impending free agent in the summer, to the bench, which some considered a demotion. The 7-footer and Spoelstra happily talked things out and the demotion turned out to be a brilliant move. Whiteside’s impact on the Heat was amazing as the center averaged 17.5 points, 13.3 points and 3.4 blocks off the bench.

The eight-year head coach also shifted the style of the starting lineup by moving Amar’e Stoudemire to the center slot and Luol Deng to the power forward position. The moves were primarily made so that Goran Dragic could run a faster offense. The unprecedented, in-season change also proved to be another intelligent move by Spoelstra while getting Joe Johnson incorporated. The moves helped Dragic and Deng, who both struggled heavily in the first-half of the season, revive their careers as the duo put up All-Star caliber numbers in the second-half of the season.

But Spoelstra’s changes weren’t done there. The 45-year-old trusted and allowed rookie Josh Richardson, his only other point guard, to have a big role on the team. The second-round pick juggled around the garbage-time unit and D-League for a majority of the season before Spoelstra decided to utilize him differently. With Spoelstra working tirelessly with the first-year guard on his shooting, Richardson saw his three-point shooting percentage ascend to a whopping 53.5 percent. That mark was the best shooting percentage (at least 20 games played, minimum of one taken per game) in the NBA since the break. The reward: Richardson became the East’s Rookie of the Month in March.

Coach Steve Clifford’s Charlotte Hornets has made gigantic strides this season but the first-round matchup currently going on between these two teams has showcased which coach has done a better job this season. From exploiting matchups to countering certain moves, the Heat has had the advantage so far. Even Spoelstra’s ability in utilizing his two rookies, Richardson and Justise Winslow, to play major rotational roles, has been instrumental. Clifford has been unable to properly use rookie Frank Kaminsky, the pick before Winslow, in the series thus far.

With the Heat’s ability to rise to the East’s elite amidst grueling circumstances is a testimony to Spoelstra’s relentless coaching ability. If the Heat end up beating the Hornets and continue its hot play, Spoelstra is more than deserving to acquire his first Coach of the Year award.
[xyz-ihs snippet=”Responsive-Ad”]