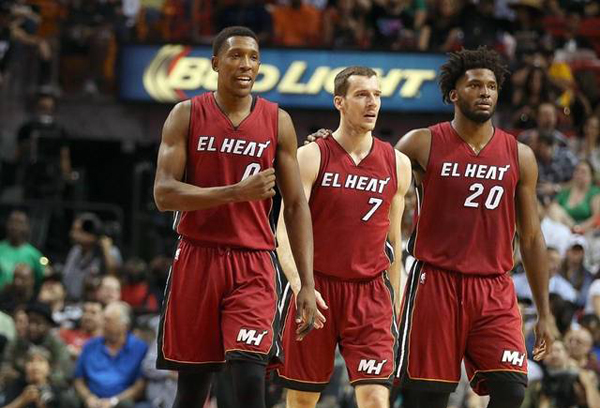 With the departure of the franchise’s all-time scoring leader, Dwyane Wade, and the addition of all the fresh new faces signed by the team in the offseason, it’s hard to predict an accurate expectation of what the team will look like heading into next season. Right now, the picture is a bit murky in Miami.

In order to assess what we can expect from the Heat next season, let’s take a look at the team’s current roster, which contains a total of 17 players. That number must be trimmed down to 15 by the start of the 2016-17 season.

What stands out about this current lineup, aside from the fact that Wade, Luol Deng and Joe Johnson are all absent, is its youthfulness. In 2015-16, the Heat were one of the oldest teams in the league. Now, it seems the youth movement in Miami has begun.

Manny Navarro of the Miami Herald recently pointed out the following:

So what will this transition to a younger core of starters and role players mean for the Heat?

How will it affect the way the game is played in Miami?

Haslem, the team’s longest-tenured player, offered his thoughts shortly after re-signing with the team:

“I’m sure it’s going to be uptempo, maybe even more uptempo (than last season). With Dwyane being out, we’re going to have to get Goran even more and more involved. Everybody knows Goran is at his best when he’s in the open floor.”

While Haslem has a point there, the reality of the situation is that it’s essentially impossible to gauge the Heat’s true potential without knowing the circumstances of Bosh’s health. Bosh was the team’s leading scorer before missing the second half of the last two seasons with blood clots.

Team president Pat Riley addressed this reality shortly after the Heat were eliminated from the playoffs last May:

“The difficult thing for me in evaluating how far we’ve come and how good we are, really can’t be answered, it can only be answered hypothetically if Chris [Bosh] was healthy,” he continued. “Then you would have a real idea of how everything would fit.”

Speaking in hypotheticals here, let’s say Bosh remains healthy next season. Let’s consider, for a moment, that he plays to the top of his potential and avoids another blood clot scare. If that becomes the case, the offense would run primarily through the 6’11” power forward. Bosh’s versatility in the low-post as well as his ability to spread the floor and knock down mid to long-range shots will be the engine that drives this team.

Let’s not forget, Bosh was a perennial 20+ points, 10+ rebounds a game player when he ran the show back in his Toronto Raptors days. If the Heat can find a way to emulate a style of play at least somewhat similar to the way Bosh found his dominance back in Toronto, the team may find themselves in a strong position next year.

Another key component of Miami’s game will be Dragic aggressively running the point and setting the pace. Dragic’s ability to slash-and-dash to the hoop, knock down jumpers and distribute the ball efficiently will be relied on to help the team’s offense. Dragic averaged 14.1 points and 5.8 assists per game last season. Now that Wade and Deng are gone, look for Dragic to take on more of a role in the offense. At age 30, the Slovenian point guard should be right in his prime heading into next season.

While Bosh and Dragic do their thing on offense, Whiteside will be the lane-clogging anchor on defense. Miami’s biggest free-agent signing, by far, was the four-year, $98 million deal they reached with Whiteside. We’re talking about a 27-year-old 7-footer with tremendous ability and seemingly limitless potential. Not only did the big man emerge as a top defender in the NBA, while leading the league in blocked shots last season, but he began to develop a more well-rounded offensive game as the year went on.

Whiteside’s potential as a low-post scorer, his continued improvement at the free-throw line, as well as the emergence of his mid-range game will be vital to Miami’s success next season. The team has invested a lot in his future and Riley, as well as head coach Erik Spoelstra, believes he will prove to the world that he is worth the deal he just signed.

“I know there’s a lot more work to be done. There’s expectations for things,” Whiteside recently told Couper Moorhead of NBA.com. “Being able to dribble a lot more, [and] jumpers. Still post work,” Whiteside continued. “I want to get the rebound and push it in transition. I’m not trying to say I’m going to be Goran Dragić or anything, but I just feel like a couple dribbles up the court could help speed up our offense.”

If Whiteside does evolve his offensive game and he remains who he is on defense, it will likely mean the difference between the Heat making the playoffs and missing the playoffs entirely next year.

So what about the other guys?

What can the young, supporting cast provide to the team while the core trio of Bosh, Dragic and Whiteside do their thing? Let’s start with last year’s impressive rookies who have already catapulted themselves into the limelight.

Winslow was the 10th pick in the 2015 NBA Draft, while the Heat took Richardson in the second round. Winslow was primarily used as a lockdown defender and a reliable “energy” guy in 2015-16. Richardson, meanwhile, emerged (particularly in the second half of the season and in the playoffs) as a knockdown three-point threat. Both guys provided meaningful minutes for the Heat down the stretch last year and will only improve as the 2016-17 season begins. Winslow will continue to prove his worth as one of the most complete players on the roster for Miami and Richardson will battle for a starting role at shooting guard with Tyler Johnson.

As for the bench players, Ellington is certainly interesting to look at. He will also vie for a starting role at shooting guard. The former Brooklyn Nets guard was signed in the offseason for his ability to knock down threes and provide timely scoring. Other guards like Weber and McGruder will work to earn a role on the team but may also be sent down to the Heat’s D-League affiliate Sioux Falls Skyforce in order to hone their game a bit more.

Another thing that stands out about Miami’s current roster is the slew of forwards that have signed with the team. These guys will work to develop contributing roles behind Bosh and Winslow. McRoberts still hasn’t lived up to expectations at the power forward position, albeit largely due to injury problems, so the Heat must figure out how to use him properly, as they are still paying him nearly $6 million per year and haven’t given up hope on him just yet.

Williams is likely the favorite of Miami’s new additions at forward to play significant minutes. He is an athletic, six-foot-eight tweener who averaged 9.3 points per game in a limited role with the New York Knicks last season. In addition, the Heat are looking forward to seeing what Reed can do in a Heat uniform. He may wind up being the steal of the offseason. Meanwhile, Johnson was brought in mainly to defend and grab rebounds.

Babbitt and Jankovic were brought in by the team as big-bodied power forwards who can knock down three-point shots. Only time will tell what these two, young offseason signees will provide to the team, but the Heat certainly hope to carve them out a contributing role on offense.

While the Heat gauge their newest prospects during their NBA Summer League stint, it will slowly become clear as to who can provide what to the team once the season begins. Then, of course, comes training camp, where the final decisions on who will make the team’s 15-man roster will be made.
[xyz-ihs snippet=”Responsive-ImagenText”]