Don't Miss
Home / Editorials / Was the Re-signing of Mario Chalmers the Right Move?

Was the Re-signing of Mario Chalmers the Right Move? 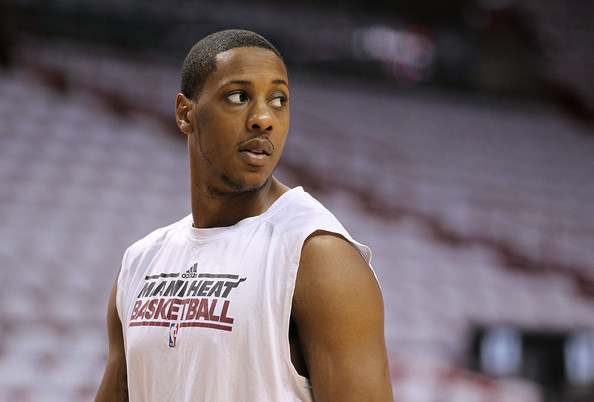 In the aftermath of LeBron James leaving the Miami Heat for the Cleveland Cavaliers, Pat Riley has brought back the majority of last season’s nucleus. The Heat have re-signed franchise players Chris Bosh and Dwyane Wade, while retaining key cogs such as Chris Andersen, Udonis Haslem and Mario Chalmers. While Heat fans celebrated the re-signings of four of those aforementioned players, the re-signing of Chalmers was met with a mixed reaction. After all, one of the reasons the Heat lost the 2014 NBA Finals to the San Antonio Spurs was due to the horrendous play at the point guard position by Chalmers.

In the 2014 NBA Finals which saw the Heat lose to the Spurs in lopsided fashion, 4-1, Chalmers averaged just 4.4 points on 33 percent shooting. He was benched in the final game of the series, in which coach Erik Spoelstra instead elected to go with a starting lineup without a point guard. Despite playing just 23 minutes a game during the series, the point guard committed more personal fouls than any other Heat player in the series, and turned the ball over two times a game. He averaged just 2.8 assists per game versus the Spurs.

In essence, Chalmers did more harm than good for the Heat during the NBA Finals.

The six-year veteran wasn’t the only one who played bad on the Heat’s end during the Finals. You could make the case that everybody not named LeBron had forgettable series performances versus San Antonio. It led to the Heat losing their second NBA Finals in the ‘Big Three’ era, and the eventual dissolution of the ‘Big Three’, as LeBron decided to take his talents back to Cleveland a couple of weeks after opting out of his contract with the Heat.

Having said that, despite Wade and Bosh’s underwhelming performances in the 2014 NBA Finals — Wade shot under 44 percent while averaging just 15 points per game, while Bosh averaged just 14 points and 5 boards per game — it was obvious the Heat needed to bring them back in the aftermath of its best player leaving through free agency. As for Chris Andersen, he’s been considered the Heat’s best defender in the post, while Haslem has been an energetic fan favorite of the Heat fan base for the past decade.

Can the any such argument be made for No. 15?

The bottom line is the Heat entered free agency with just one player under contract  — that was fellow point guard Norris Cole — and ended up acquiring Duke point guard Shabazz Napier during the 2014 NBA Draft. Miami’s options at point guard were limited from the get-go.

The 2014 free agency class at the point guard position was never impressive. The top players at the position were outside of the Heat’s spending limit as players such as Kyle Lowry, Isaiah Thomas, Patty Mills and Steve Blake all signed with their 2014 teams before LeBron made his decision to leave Miami. Miami was hamstrung by the fact that they had to wait for LeBron’s decision of whether or not he was going to return to the Heat, before they could make serious strides toward bringing in key impact players through free agency.

As a result, the Heat ended up re-signing Chalmers to a two-year deal just days after LeBron’s decision. As talented as Cole is, he’s still a raw player just two years into his NBA career. Napier struggled during the NBA Summer League as he shot under 30 percent from the field. Of the three points guards on the roster, Chalmers is obviously the Heat’s best option at the moment.

It’s sometimes easy to forget, but Chalmers has been a stable starting point guard for the Heat since his rookie season in 2008. No. 15 has been the Heat’s starting point guard for six consecutive seasons, and has had his share of big moments in helping the Heat advance to four consecutive NBA Finals during the ‘Big Three’ era. After all, it was Chalmer’s 25 points in Game 4 versus the Oklahoma City Thunder in the 2012 NBA Finals that helped the Heat take a 3-1 lead over the Thunder, before eventually winning the series in Game 5.

Chalmers is a headstrong player, capable of hitting clutch shots and excelling past the three-point line. Just less than two seasons ago, the University of Kansas product scored a career-high 34 points with 10 three-point field goals versus the Sacramento Kings in a regular season game. Chalmers is a career .373 shooter beyond the arc, and actually shot a higher three-point percentage than Ray Allen during the 2013-14 season.

Had it not been for LeBron’s defection to Cleveland, there would have been a good chance the Heat would have allowed No. 15 to walk in free agency. However, with the team’s best player leaving on such short notice, the Heat’s best plan of attack was to bring back its core from last season to keep the franchise stable. That mission has been accomplished with the re-signings of Bosh, Wade, Andersen, Haslem, and yes, Mario Chalmers. The Heat will return in the 2014-15 season with its veteran core from last season, along with a few new faces in Josh McRoberts and Danny Granger.

As imperfect as Mario has been at times over the years, you cannot take away the fact that he’s a mentally strong player who has nailed down clutch shots, and played in every big game imaginable at the collegiate and pro levels of basketball. Remember, it was Chalmers who hit the game-tying three-pointer near the end of regulation in the 2008 NCAA National Championship Game to force overtime. The Kansas Jayhawks would end up winning the game due to Chalmers’ heroic shot.

The former Jayhawk may never be an elite player at the point guard position, but there is no denying the positive characteristics and stability that he brings to the Heat franchise entering the 2014-15 season.

Because of that, the Heat’s re-signing of ‘Super Mario’ was the right one.