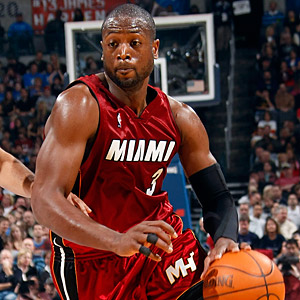 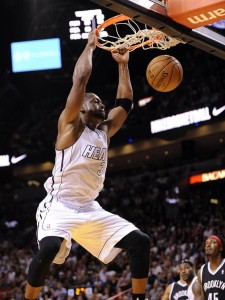 Getty Images, “Wade had the full arsenal working Saturday, knocking down mid-range jumpers, penetrating into the lane, getting out in transition, and even making a rare three-pointer.”

Miami Heat fans saw a familiar figure during the team’s 102-89 victory over the Brooklyn Nets on Saturday night at American Airlines Arena.

He moved with a familiar pace, raced past defenders with ease, exploded to the rim, and even went high to thrown down a two-handed jam off a lob pass from Ray Allen.

He wore No. 3, but the Dwyane Wade that was on display Saturday night looked much more like the Wade of years past, the top five player in the world Wade, the NBA Finals MVP Wade, than the Wade that had a times looked like a shell of his former self to start this season.

After being the pace-setter for the Miami franchise for the first seven years of his career, Wade has since given up that distinction to the younger, more talented LeBron James.

But it was Wade who was the best player on the court Saturday night, keeping the Heat afloat with 16 first half points, and helping spark a decisive rally with 12 third quarter points and three assists.

By game’s end, Wade had converted 14-of-20 shots for 34 points to go with seven assists and no turnovers for easily his best effort of the season.

It was Wade’s first 30-point game of the season, and perhaps just as importantly, it was only the second time he attempted 20 shots in a game this year, showing a confidence and assertiveness with the ball that had at times been lacking.

“I was just being aggressive,” Wade said after the game.  “The lane was open at certain times and I took it.  I just took my shots.  I wasn’t worried.  Sometimes you get into trying to take perfect shots, but tonight I just took the shots that I normally take and I was able to hit some and get a rhythm early.  I just stayed aggressive the whole night.”

Wade had the full arsenal working Saturday, knocking down mid-range jumpers, penetrating into the lane, getting out in transition, and even making a rare three-pointer.

But it was the finishing in the paint that was perhaps the biggest difference for Wade, who went into the game shooting an abysmal 26 percent on shots between 3 and 9 feet out, a number that led many to the conclusion that the veteran guard was losing his athleticism in his 10th NBA season.

It has been a long road back to good health for Wade after undergoing left knee surgery at the end of last season, a procedure which forced him to miss the London Olympics and limited his basketball activity for almost the entire off-season.

If Wade is now showing signs of progressing back towards 100 percent health, Heat coach Erik Spoelstra said it’s a byproduct of his devotion to the process of regaining his prior form.

“He’s been putting in a tremendous amount of work behind the scenes,” he said.  “He was at the gym four-and-a-half hours before the game (Saturday).  He’s putting in extra work at shoot-around working on his game. He’s making the necessary adjustments.  There was not a thought in our minds to panic.

“It’s a long season.  It started off with some minor injuries and it takes some guys some time to get in the flow.  But I’ve been around Dwyane for 10 years and you see how dedicated he is to do it for his brothers.”

However, the process of getting back into top form and full health is still ongoing for Wade, who cautioned that performances like Saturday night’s will not always be the norm.

“Some days I feel good, and some days I don’t.  I’ve just got to push through it,” he said. “Coming off of surgery, my goal was to be better as the season goes on.  It’s going to be some nights when I struggle and don’t have my explosion, but I keep working at it and get in the weight room and do the things I need to do.”

“I’ll be fine.  Some nights will be like tonight and some not.  I’ve got to try to be the best player I can be for my team.”

Despite some ugly outings early in the year, like the 2-of-10 effort against the Los Angeles Clippers and the 3-of-15 against the Memphis Grizzlies, Wade’s performance Saturday pushed his scoring average to 19.5 (second on the team) and his field goal percentage to .489.

Wade’s Player Efficiency Rating now sits at a very respectable 21.7, which puts him in the top 20 in the NBA.

Spoelstra said there’s every reason to expect his continued ascendancy towards the high level of play he’s come to expect from Wade, given the work ethic and mental toughness that he possesses.

“He’s a competitive guy. He’s very dedicated and he understands that some of those things were out of his control,” he said. “He’ll put in the time to get his body right. He’s been doing a lot of things to make sure he physically feels good.