Wade Suspended One Game for Kicking Sessions in Groin 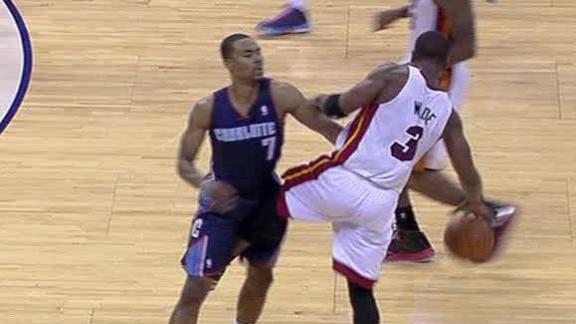 Wednesday night as the visiting Miami Heat were fending off the surging Charlotte Bobcats in the fourth quarter, things got a little chippy to say the least.  As the Bobcats got within four points, Ramon Sessions fouled Dwyane Wade near midcourt and Wade either intentionally or unintentionally retaliated with what looked like a shot to the genital region of Sessions.  You be the judge.

Because of his actions on Wednesday night, Wade must serve a one-game suspension on Friday night as the Miami Heat take on the Detriot Pistons at the Palace of Auburn Hills.  After the suspension was announced, Wade tweeted, “”I’m far from being a dirty player + my intent was never 2 kick Ramon Sessions.”