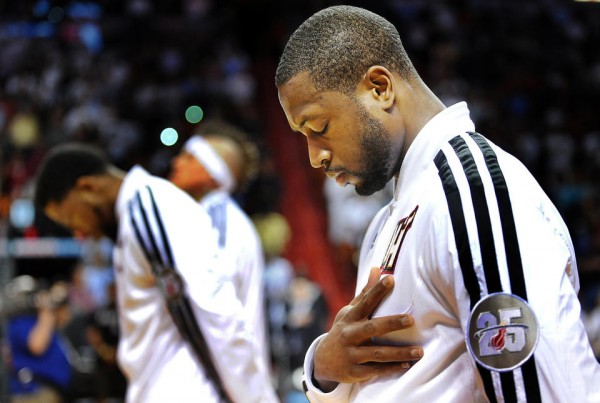 Life in the Eastern Conference is lonely near the top and crowded in mediocrity. As four-time defending conference champions, the Miami Heat reigned supreme at the top of the food chain during the Big Three era. However, LeBron James’ earth-shaking return home to Cleveland and Paul George’s horrific leg injury during Team USA’s intrasquad scrimmage in Las Vegas places the balance of power for the East crown in absolute limbo. Major free agency moves (Pau Gasol to the Chicago Bulls) and potential trades (Kevin Love to the Cleveland Cavaliers) give many teams a fighting chance at representing the conference, including the Heat, who have a multitude of reasons to get back to the NBA Finals for a fifth straight time. Here are the top 10 reasons why the Heat are still favorites to win the Eastern Conference title:


Heat fans were beaming with excitement upon the arrival of James to South Beach for a championship-or-bust gathering with Dwyane Wade and Chris Bosh, watching Cavaliers fans writhe in anger and heartbreak as they watched their hometown hero bolt from Ohio. Today, Heat fans reverse roles with Cavalier fans and represent the bride stood up at the altar. Moreover, the Big Three mates, team president, head coach and fellow role players that James spurned will certainly take this as rejection, which evolves into a vengeful motivation to disappoint the multiple-time MVP’s plans to take a championship away from them.

After all, both Wade and Bosh opted out of their current deals with hopes of building a deeper roster with James – who also opted out – headlining the campaign. James’ defection back to Cleveland can be depicted as a sense of professional betrayal towards the duo, who has likely circled their games against the Cavaliers in red marker by now. Retribution will be the name of the game if the teams meet in the Eastern Conference Finals. I doubt James can overcome the fire in both Wade and Bosh’s bellies aimed directly at upending and demonstrating why leaving Miami was a grave mistake on his behalf. 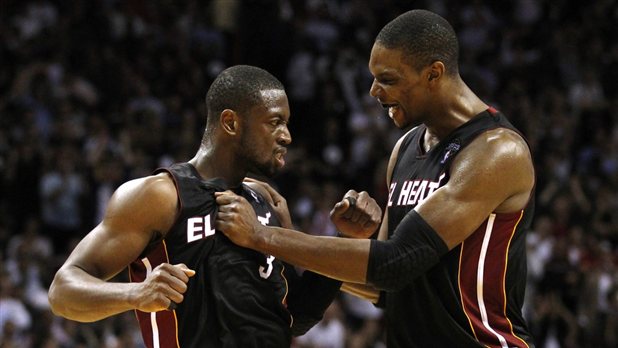 Two out of three is never bad, considering how huge a loss the Heat suffered in free agency. Despite the utter horror of watching their court general depart South Beach, Heat fans still have the remainder of their weapons to go to war in the Eastern Conference. Wade and Bosh together are enough for the Heat to make noise in the playoffs. Besides, James would have never won NBA championships without the two stars. Despite Wade and Bosh regressing into supporting roles for James during the four-year run, both haven’t lost sight of their abilities to lead squads to postseasons. Championships today are won by more than one star. Wade and Bosh can make for an inside-out attack that not many teams in the East can rival. Can James and Kyrie Irving match that star level? James is a proven champion, while Irving, who is an All-Star guard himself, has never seen the postseason. I’d place my bets on the more championship-ready duo right now, which is Wade and Bosh. 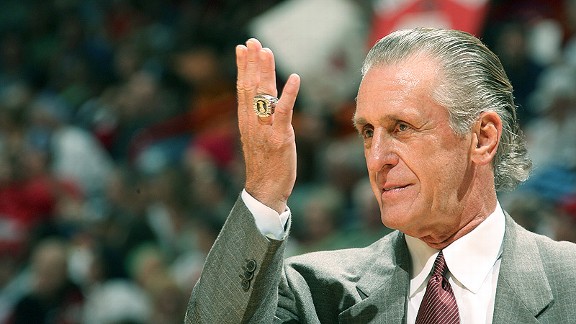 Reports surfaced that James didn’t respond to several texts and emails that Heat team president Pat Riley sent to him in the aftermath of James’ departure to Cleveland. Ignoring a man who taught him the culture of championship-level basketball in the NBA, who knows how to build and coach successful teams and franchises and who understands what is needed of superstars to go beyond just talent and ascend to greatness is equal to betting on an baby giraffe to decimate a grown lion – impossible to fathom and unacceptable to do.

Riley has been about titles since the Showtime Lakers era of the 1980s, for which he won four championships with Hall of Famers Magic Johnson and Kareem Abdul-Jabbar. He has done the same for a Heat franchise that wasn’t expecting any type of success before his arrival, as he has helped bring three titles to South Beach as both a coach and executive. Constructing talented and promising rosters is commonplace for a basketball mind like Riley’s. He quickly moved forward after losing out on James, acquiring several talented free agents to turn a roster that once depended solely on the health and play of three superstars into a deep, diverse and efficient lineup that can and will surprise many Heat detractors in the post-James timeframe. 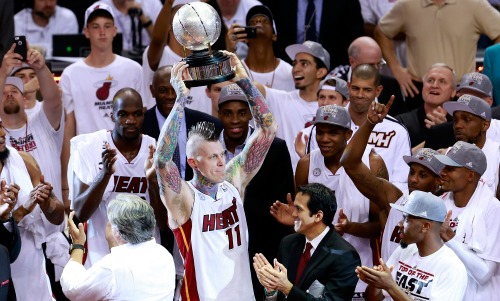 Let us not act as if four consecutive Eastern Conference championships can easily be brushed aside when one player leaves a franchise. The Heat did a great job of reloading the roster with players that have been deep into the playoffs before. New starting small forward Luol Deng has 48 games of playoff basketball on his resume. Danny Granger has seen his share of huge postseason games while with the Indiana Pacers, including match-ups with the Heat for East supremacy. Rookie Shabazz Napier has never played NBA playoff basketball, but isn’t afraid of the big, bright lights, as he has been a part of two national title teams at the University of Connecticut. Add these pieces to current Heat veterans that have multiple rings, and the comfort level of playing for the East crown is quite easy for this lineup. 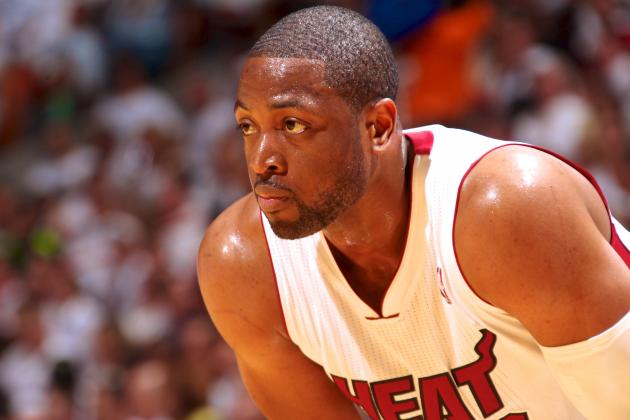 Many people critical of Dwyane Wade’s future have surfaced after Wade’s collapse during the NBA Finals against the San Antonio Spurs, as the 10-time All-Star and former Finals MVP looked slow, lethargic and listless down the stretch. Credit Wade’s lack of healthy knees to such a performance, because when “Flash” is in high gear, not much can be done to neither stop nor contain him. He definitely enters this season with a chip on his shoulder, as he must overcome the accusations that his days are numbered as the top dog on any lineup. Whether or not James was on the Heat, it was still Wade’s team by way of leadership. Wade could’ve bolted to his hometown of Illinois and signed with the Bulls, playing a lesser role to Derrick Rose and Gasol, but the 32-year old chose to remain with the franchise that pushed him to stardom. Wade wants to prove his detractors and James wrong, despite battling knee injuries that have certainly slowed his play and impact. 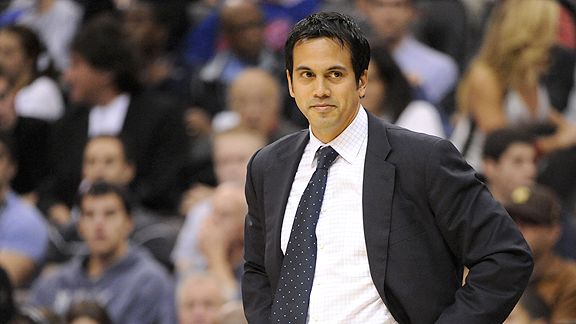 Once a video coordinator for the Heat in the 1990s, Spoelstra is now an accomplished head coach who has never missed the playoffs at his current helm. As an understudy to Riley for several years, Spoelstra has developed the formula to coaching quality teams that put defense first, much like Riley’s title-winning squads have done in the past. Prior to his four-year run coaching the Big Three, Spoelstra led far less-talented teams to the postseason. Spoelstra managed three big egos through four straight Finals appearances. This current crop of players don’t lack in the talent department, giving Spoelstra yet another smoking gun to wield amongst the East’s elite. With early success building him into the one of the league’s best coaches, Spoelstra’s equipped to orchestrate another championship run. 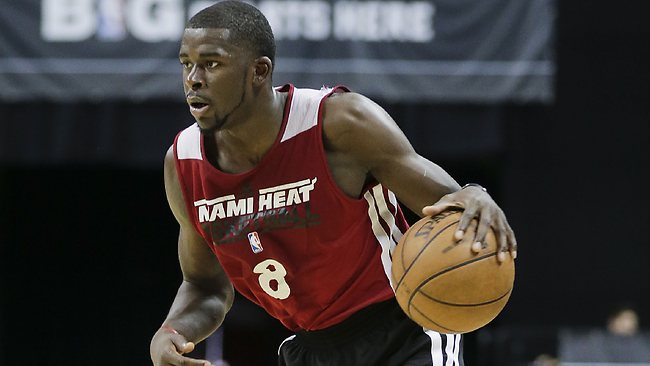 During the Big Three era, the Miami Heat found itself stuck with one-year contract players and a bench that could not thrive long without James, Wade or Bosh on the floor. Only one player (Ray Allen) outside of the Big Three averaged double figures during the past four seasons. This current lineup has the potential to have four or five players reach double figures from night to night. Losing James opens up opportunities for young talents like James Ennis, Norris Cole and Justin Hamilton to contribute, along with veterans Josh McRoberts and Udonis Haslem. Wade and Bosh will need to get these players in position to make big plays, but the depth of this team is the best in a long time. It’s hard to argue for other teams that have a better bench than what the Heat have right now.

Spoelstra preaches defense on a nightly basis and he has been greatly rewarded for the expectations he places upon his players. The Heat have ranked in the top 10 in scoring defense in five consecutive seasons, something no team has done in this current span. Miami will spread the floor on offense, but force turnovers and fast breaks on defense. A lot of the team’s stinginess to allow high-scoring games is attributed to James, but Wade is no slouch himself as a three-time All-NBA Defensive Team standout. The old adage always goes, “defense wins championships.” With seven of the top 10 defensive teams from last season being from the Eastern Conference, one crucial steal or block may be the difference between a Finals appearance and a conference runner-up slot. The Heat differs from those other six teams because it has been a consistently tough team on defense throughout the years. 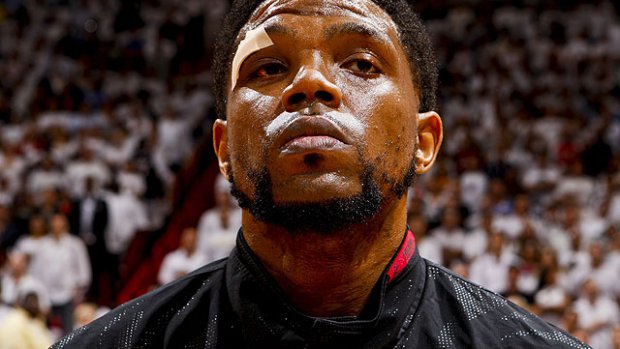 The last five NBA championship teams have been amongst the top five oldest squads. The Heat enters the 2014-15 season as the oldest team in the league with a 29.1-year-old average. In contrast to the younger lineups that normally start the season hot before cooling off by the spring, veteran lineups know how to manage the rigors of an 82-game season. Veteran leadership is just as important as talent or depth when postseason play begins because of the experience that is needed in order to navigate through a seven-game series. Miami has enough veterans to combat any team in the Eastern Conference. There is no substitute for experience when it comes to sports. With five players with at least 10 years of experience under their belts, no Heat fan should expect this team to have a deer-in-the-headlights approach towards any round of the Eastern Conference playoffs. 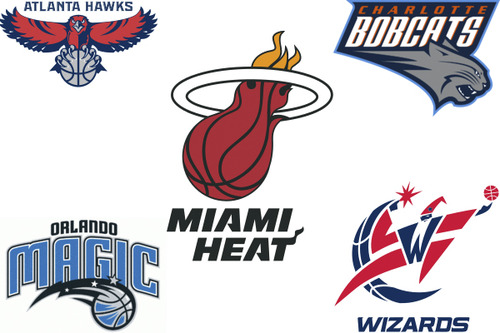 Compared to the Western Conference (which has featured five teams with at least 50 wins in each of the last two years), the East is incredibly shallow when discussing championship contenders. Besides Miami, the Bulls, Cavaliers, Toronto Raptors and Washington Wizards stand as potential Finals teams, while the rest of the conference remains a work in progress. These five teams can easily battle amongst themselves for positioning in the conference, all while decisively turning back the rest of the competition. The Heat will only have to deal with the Wizards for the Southeast Division crown, but can situate itself as a top-four seed by just besting one of the other teams. One could argue that Miami is slightly better than the playoff-inexperienced Raptors and could hold off the young Wizards for the division, which could draw the defending conference champs closer to yet another East Final. The last two seasons have each seen only seven East teams with winning records. Lopsidedness in the conference has become the trend. The Heat will benefit from such a lack of balanced competition to focus solely on just a handful of squads aiming to end the four-year streak.
[xyz-ihs snippet=”Responsive-Ad”]