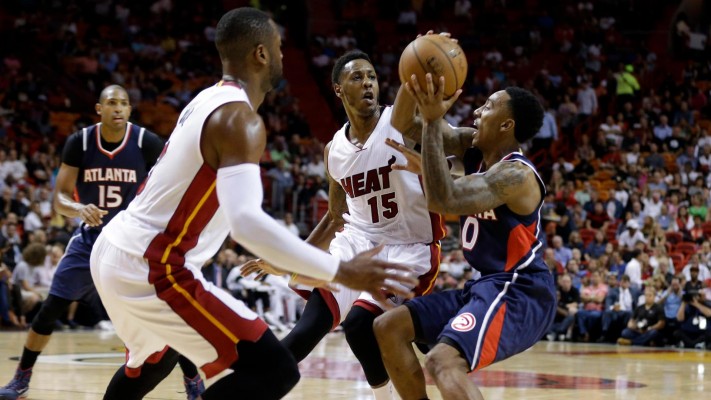 Defense wins championships. We’ve all heard it; if you know sports, it’s a no-brainer that suffocating defense translates into W’s. Well, as obvious it as it seems, it’s apparent that the Miami Heat haven’t gotten the memo lately.

Despite sporting the league’s 9th best scoring defense in the NBA at just under 98 points a game, Miami’s defense in its past two games has been anything but the league’s best. Back-to-back 100-point games by the Washington Wizards and Atlanta Hawks is a clear indication for the 9-9 Heat that, whether it’s attributed to individual breakdowns or just a collective lack of intensity, the defense needs to pick up if they want to get back to winning ball games consistently.

Sure, the Washington game was on a back-to-back, and Dwyane Wade has been in and out of the lineup lately, but even still, defense has been a glaring issue. Part of the reason is a lack of size in the lineup. The Heat are the worst rebounding team in the NBA, and the third worst at defending efficiently—in layman’s terms, they’re letting teams get good looks, and as evidenced by the numbers, opposing squads are making them pay. Without a lot size or length, it’s difficult to disrupt opponents’ passing or shooting angles, and it’s even tougher to keep the more athletic, rangier bigs off of the glass.

For those that don’t believe the drop-off is real, go check the advanced stats for yourself.

Despite the flawed defense, the Heat currently force the 7th most turnovers in the NBA, but they also rank dead last in blocks; both stats make perfect sense considering the current makeup of the roster. Without big men in the middle, blocks are hard to come by, but with a lot of scrappy, clawing guards and forwards, Miami often deflects and intercepts passes in the lane.

There’s only so much the Heat can do with what they have, but their porous defense has been front and center lately. After a two-game slide, the Heat have a chance to make it all back Friday night against the Milwaukee Bucks, a team that recently felled Miami by a count of 91-84. With freakishly long forwards like Larry Sanders and Giannis Antetokounmpo, Miami will have to crank up the intensity to score some much needed payback, but as it is with all things, you get what you put out.

If the Chris Bosh, Wade and others have serious intentions of being a competitive squad in a wide open Eastern Conference, their inconsistent and shoddy defensive play can only be excused for so long. Friday night is the time to get the ball rolling in the right direction.
[xyz-ihs snippet=”Responsive-Ad”]