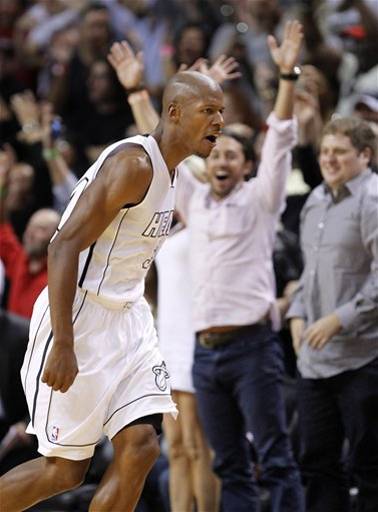 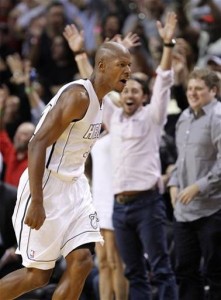 The Associated Press, "Allen, known as a clutch performer throughout his career, has continued to display the brilliant pressure shooting that has become a trademark during his 17-year career."

After struggling often with late-game offensive scenarios over the past two seasons, the Miami Heat have transformed into one of the most unstoppable fourth quarter offenses in the NBA.

While some of that can be attributed to the added continuity of a third year together for the core of LeBron James, Dwyane Wade, and Chris Bosh, as well as the natural confidence that comes from winning a title, a good portion of the improvement can be traced to the addition of one of the NBA’s great weapons: the Ray Allen three-point shot.

The basic philosophy behind the initial construction of Miami’s Big Three was to have three players who could command the attention of the defense on every possession and to surround those players with knock-down jump-shooters to force the defense to pick its poison.

The strategy often worked to great effect during each of the last two seasons, though even last year’s team sometimes struggled to consistently knock down open threes before going on a tear from long range in the NBA Finals.

But the title of Mr. Consistency is appropriate for few players as much as it is for Allen, who has taken full advantage of the open looks afforded him by the floor space created by James, Wade, and Bosh to knock down 27-of-51 from long distance for a whopping 52.9 percent, up from the 45.3 percent he hit from three for Boston last season.

His presence on the court has made Miami particularly tough to defend late in games where the Heat have thrived, erasing fourth quarter deficits in victories over Atlanta, Houston, Milwaukee, Cleveland, and Denver twice.

Allen has made enormous late three-pointers in four of those games, starting with his clutch go-ahead four-point play in the third game of the year, knocking down a triple from the left corner on a pass from a driving James with six seconds on the clock to give Miami a 119-116 win over the Nuggets.

He also knocked in late triples to help key comeback wins over the Rockets and Bucks, and Allen provided his second game-winner Saturday night against the Cavs, and again it came after the defense collapsed on James.

In the prior game-winner against Denver, it was a dribble drive by James that drew Allen’s defender off of him to free up the pass to the corner for the shot, but Saturday it was a cut into the paint by James that caused the defense to compress, giving James a clear line of sight to Allen for an elbow three-pointer that the league’s all-time three-point king later termed ‘a lay-up.’

It was just the latest example of how lethal a closing Miami lineup that features its Big Three plus Allen and virtually anyone else can be.

“He’s an unbelievable threat to have,” James said of Allen.  “But it doesn’t matter to us who takes the last shot.  We just try to execute our offense and find the open man.”

How Allen continually finds himself to be that open man is a puzzle even to the Heat.

“I don’t understand how he continues to be open, but I’ve seen him do it plenty of times late in games when I went against him. He finds a way to get to that open spot, and if he’s open for a split second, we’ve got to find Ray and get it to him.”

And with good reason.

Allen, known as a clutch performer throughout his career, has continued to display the brilliant pressure shooting that has become a trademark during his 17-year career.

Through 13 games, Allen is averaging 29.3 points per 48 minutes and posting a .636 effective shooting percentage in clutch time (defined as the last five minutes of fourth quarter or overtime with neither team leading by more than five points).

Allen has made 4-of-9 three-pointers in such periods of games this season, with James assisting on three of those makes.

“He’s a great passer,” Allen said of James.  “He attacks throughout the game.  What I’ve been trying to do is to read him and get in situations to give him an outlet. There are two guys loaded up on him a lot, so in a situation like that, instead of cutting I just give him that space and hopefully the ball finds me or someone else and we knock down the shot.”

“At the end of the game, I’ve been in so many situations like that.  I know that spacing is key.  We equate it to football.  Blockers have to block for the quarterback, and the receiver has to run up the field to get open.  We’ve been committed to that as a team.”

Heat coach Erik Spoelstra has seen plenty of dagger jump shots by Allen from the other side, so many in fact that he said he has to fight his natural inclination to cringe in horror when one goes up.

“When he releases, I still have almost a split nanosecond of ‘oh no,’ like it’s coming against us,” he said. “But it’s a pleasure to have him on our side. When it’s really money time and that’s where he’s proven himself for a long time, he makes big shots and he makes them under pressure.  It’s great to have.”

The coach said Allen’s instinct to find the open space in the defense at just the right time is a unique skill for even the best shooters.

“Ray is the definition of ‘the ball will find energy.’  It’s constant movement and it shifts, so whenever the defense turns their head, he runs into the passing lane and you see him right in front of you,” Spoelstra said.  “It’s an incredible skill to have.  When there’s dribble penetration and everyone is watching the ball, he finds a way to get in front of the vision of the passer, and obviously, he’s a gamer.”

While Allen is no longer starting games as he has for virtually his entire NBA career, the future hall of famer said he has no problems settling for simply closing them instead.

“It’s mostly an ego thing when you don’t want to come off the bench,” he said.  “The biggest compliment is being in the game at the end and helping the team win.  You look at this lineup and so many guys have sacrificed to be here.  Everybody is making some sacrifice to some extent.  We know what we want to do here.  We’re all buying in to what we want to do so we can get to the ultimate goal.”