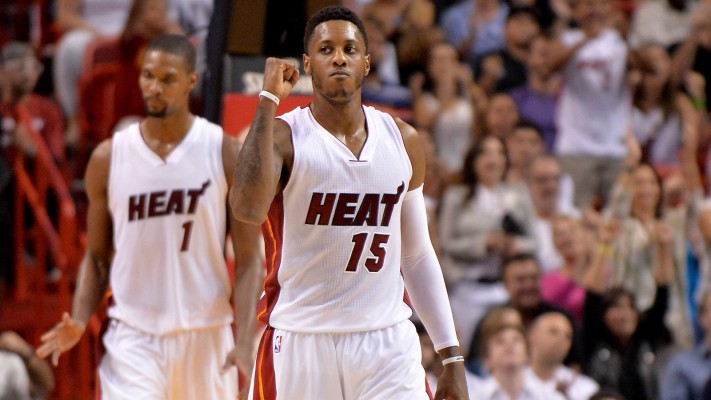 When Mario Chalmers was re-signed by the Miami Heat after the departure of LeBron James, Heat Nation wondered aloud why the organization would even bother bringing back such an inconsistent player.

During the offseason, Chalmers was given a two-year, $8.3 million contract. Pat Riley constantly echoed confidence in Chalmers’ value to the franchise. Riley envisioned the veteran guard as more of a shooting guard entering the 2014-15 season back in July:

“We’re looking at Mario differently in this roster. He’s a point guard, but we’re also looking at him as a shooting guard. Mario can be very effective as a long-armed shooting guard who can shoot the three.”

The confidence in the sixth-year guard’s ability to be a shooting guard was questioned by the media and Heat faithful considering his performance in last year’s 2014 NBA Finals versus the San Antonio Spurs. In the 4-1 series defeat, many Heat players had underwhelming performances, but Chalmers was the biggest culprit.

The veteran guard averaged just 4.4 points and 2.8 assists per game, while shooting 33 percent from the field, and knocking down just 14 percent of his three-point shots. His performance was so atrocious, that after starting the first four games of the Finals, coach Erik Spoelstra benched him for Game 5.

Riley stressed back in July that Chalmers would learn from his mistakes during the 2014 NBA Finals:

“Mario is a big-game player. He learned more than ever in this Finals that you can never take anything for granted at this level of play.”

It would appear Riley’s projection of No. 15 as an effective shooting guard was true after all. The 28-year-old is having a career season, in which he’s averaging a career-high 14.6 points on 10 shot attempts per game and 46 percent shooting from the field. Chalmers has seen most of his action at SG, whether it’s been coming off the bench or starting in the absence of Dwyane Wade.

Speaking of Wade, the star guard has missed the past seven games due to a hamstring injury. While the Heat have struggled in winning games during that stretch (3-4 record), ‘Rio’s numbers have surged since he was inserted into the starting lineup. He’s averaging 19.1 points, 6.6 assists and 6.9 free throws attempts per game on 50.6 percent from the field.

Over the last seven games, Chalmers has notched two double-doubles, including a 20-point, 10-assist performance in the Heat’s 94-93 comeback victory over the Charlotte Hornets this past Sunday. Prior to this season, he had posted just one double-double through the first six seasons of his NBA career.

Spoelstra had nothing but positive remarks for his veteran guard following the victory:

“I like his pace of game right now; he’s playing at different tempos, he’s not getting out of control. That’s how he’s drawing a lot of those fouls, instead of one speed and taking off on a launching pad. Mario is not a scorer, not an assist guy, he’s a playmaker, much like Dwyane. Whatever the best play for the team is, he is making.”

Despite his lackadaisical preseason which saw Norris Cole win the starting point guard role, ‘Rio has found his calling as one of the Heat’s top three or four options on offense. Through the season thus far, Chalmers ranks fourth in points, second in assists, fourth in minutes, second in free throw attempts and fourth in shot attempts per game for the team.

Chris Bosh reminds ‘Rio that “control” is the key to maintaining consistency in his play:

Unlike in previous years where Chalmers was relegated to being mainly a spot-up shooter while LeBron and Wade dominated the ball, ‘Rio has become the definition of a playmaker. The University of Kansas product is keeping his dribble alive in the paint while creating baskets for himself and his teammates through dribble penetration. In the Heat’s win over the Orlando Magic last Saturday, ‘Rio was responsible for nearly half of Miami’s baskets in the paint.

Through 15 games, Chalmers is establishing career bests in player efficiency rating (17.62) and true shooting percentage (59 percent), while doubling the rate at which he is drawing fouls.

With his new role as a scorer off of the bench and career marks in efficiency, No. 15 will be in the running for the Sixth Man of the Year and Most Improved Player of the Year awards.

Following the victory over the Magic in which Chalmers scored a season-high 24 points, Luol Deng commented on enjoying his time on the same unit as ‘Rio:

“It’s great playing with Mario. I felt like I haven’t had much time playing with him. When he came in I was kind of going out. It’s been a lot of different lineups and it’s really early in the season. It’s just about really learning each other and once you go out there, you don’t think twice about what you’ve got to do or what the other guys are doing. That’s the chemistry we’re really trying to get to.  The more I get to read him and they get to read me out there, we’ll be a better team.”

Despite the numerous injuries that have disrupted the team’s chemistry, ‘Rio has remained the team’s most consistent performer through the first 15 games of the season.

Not bad for a guard who was benched during last year’s NBA Finals.
[xyz-ihs snippet=”Responsive-ImagenText”]