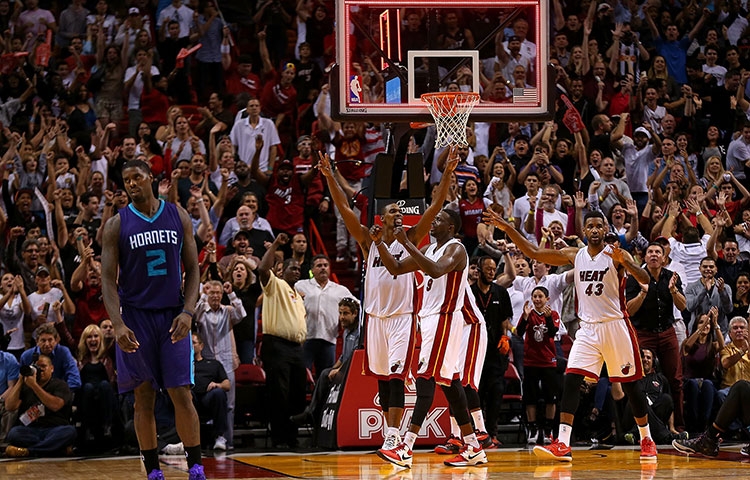 It took a turnaround jump shot by Chris Bosh, two missed shots by Kemba Walker, and a failed Al Jefferson tip-in in the last 31 seconds of the game to give the Heat their second straight victory. Luol Deng scored 26 points to lead the Heat in scoring, while both Bosh and Mario Chalmers notched double-doubles to hand Charlotte their fifth straight loss.

Bosh hit the game-winning shot with 31.1 seconds remaining in the game on a turnaround fadeaway jump shot from the right baseline. He finished with 20 points and 10 rebounds. Chalmers contributed 20 points and 10 assists for just his third career double-double. Miami’s victory over Charlotte boosted their record to 4-1 in the latter game of back-to-back sets so far this season.

In regards to both Bosh and Chalmers’ strong offensive performances in recent games, the veteran center stated their play together is still a work in progress:

“It’s a work in progress. That is why defense is so important. Just making those efforts, protecting the rim, protecting the paint and closing out to their shooters and rebounding. On offense, it’s still gonna take some time.”

Jefferson led the Hornets with 22 points and 12 boards but missed a pivotal tip-in off a Walker miss with two seconds remaining that would have given Charlotte the victory.

For the majority of the game, both the Hornets and Heat took turns in controlling the contest. During the first half, the Heat led by as many as nine points, closing the half with a 53-44 lead. Miami shot 60 percent from the field in the opening half, while Charlotte converted on just 45 percent of their field goals.

However, by the time the fourth quarter came around, the momentum had shifted. Charlotte led by as many as eight points in the final quarter with just 6:41 remaining in regulation. However, a 14-1 run by the Heat over the next three-and-a-half minutes gave Miami a 91-88 lead with just 3:21 left on the game clock.

Back-to-back baskets by Walker and Gary Neal led to a Hornets 93-91 lead with two-and-a-half minutes left. Chalmers went to the line at the 1:10 mark and converted on one of his two free throws to cut Charlotte’s lead to 93-92. Bosh would end up nailing the game-winner just 40 seconds later to give the Heat their second straight win over a division rival.

After the game, Deng remarked that it was important the team won a close game after losing several of them earlier this season:

“We did it together. They had their run, but we need games like this. We’ve been losing a lot of close games and this is a part of our growth. You don’t want it to be this close but it’s definitely an experience.”

Dwyane Wade missed his sixth consecutive game due to his hamstring injury while Norris Cole missed his second game after dislocating his finger in Thursday night’s loss to the Los Angeles Clippers.

Leading up to Sunday’s game with Charlotte, Wade had stated he would take his time with his latest injury:

“When I feel confident enough in it, that I’m strong enough to do the things that I need to do, then I’ll be on the floor. Until then, I don’t want to push. It’s getting better every day, that’s all I can ask for.”

Making matters even worse when it pertains to team injuries, Chris Andersen went down due to a sprained right ankle late in the first quarter. Andersen did not return, but X-rays came out negative. It’s unknown how long “Birdman” will be out due to his latest injury. He had previously missed five games earlier this season because of a rib injury.

Shannon Brown started at point guard in the absences of Wade and Cole. He had zero points on 0-of-2 shooting in 20 minutes of playing time. Shabazz Napier contributed 14 points in 34 minutes of action for Miami.

The Heat will host the Golden State Warriors on Tuesday night. Tip off is set for 7:30 EST on Sun Sports.
[xyz-ihs snippet=”Responsive-Ad”]