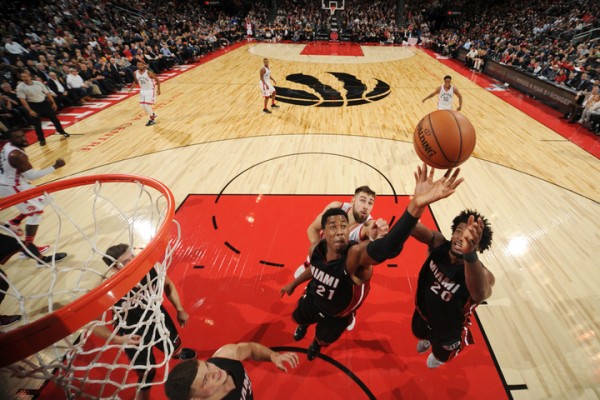 (Toronto, ON) – Cold-shooting to start the fourth quarter proved deadly for the Miami Heat as they dropped to 2-3 on the year with a 96-87 defeat to the Toronto Raptors at Air Canada Centre on Friday night.

The Heat shot 39 percent from the field on the night, but endured an especially costly stretch in the opening minutes of the final quarter. Trailing by just three at 75-72 to begin the fourth, Miami missed their first eight shots and soon found themselves trailing by a score of 84-74.

The effort to come back was short-circuited by a crucial charging call against Hassan Whiteside with 2:45 left in the game. A basket would have sliced the Miami deficit to five points at 88-83. Instead, the Raptors got the ball back and DeMar DeRozan’s basket made it a 90-81 contest to effectively end the game.

After the game, Heat head coach Erik Spoelstra spoke about what happened in the final quarter.

“We had some tough offensive positions, and you have to credit them,” Spoelstra said. “Our execution had to be at a high level to be able to get the kind of shot we wanted. So we had some tough possessions where we could have gotten something better, but we didn’t and for the most part, paid for it.”

Whiteside put up strong statistical numbers, leading the Heat with a double-double with 21 points and 16 rebounds. Four other Miami players also tallied double figures, led by Goran Dragic with 17 and Tyler Johnson with 16 points.

On the other side, DeRozan proved to be a thorn in the side of Miami all night, scoring a game-high 34 points on the evening. He became the first player since Michael Jordan in 1986 to score 30 or more points in the first five games of the season.

At the beginning, the Heat got off to a strong start, steadily building a lead after the second of two ties at four apiece. From there, they eventually increased their advantage to 12 points on a three-pointer by Tyler Johnson with 2:23 left in the opening quarter. However, Toronto then went on a 12-2 run to close out the quarter and slice their deficit to a single basket at 27-25.

Dragic spoke after the game about the struggles that began after the team’s fast start.

“We feel like we started the game well, we shared the ball, had a lot of great looks and open shots and we had our lead,” Dragic said. “Then, a couple of bad possessions and turnovers and they came back to take the lead.”

The Raptors continued their push through the second quarter, taking the lead for good on a Kyle Lowry three-pointer with 8:49 left in the period. That made the score 35-32 in favor of Toronto, who eventually headed to halftime with a 52-46 lead. Two key issues for Miami during the period were the 33 percent field-goal shooting and the six turnovers they committed.

For much of the third quarter, the Raptors continued to expand their lead, eventually holding a 73-59 advantage with 2:13 remaining in the quarter. At this point, the Heat reversed things by going on a 13-2 run to close out the period. The surge was primarily powered by seven points from James Johnson, whose basket at the buzzer made it a one-possession game with 12 minutes left.

“That third quarter was good for us, but in the fourth, we weren’t focused enough and we made too many mistakes offensively and they took advantage of us,” Dragic said.

Spoelstra also spoke about the problems that Miami had in the paint during the game.

“They challenged us at the rim and we missed some layups, but we had some guys open because they so committed to taking away the lob, taking away our drives,” Spoelstra said. “We just have to get better at it. Get organized, executing and knowing where the ball needs to go, particularly at key times in the game.”

The Heat did have some good news on the night with the return to action of guard Josh Richardson. He was asked after the game about his 11 minutes on the court, with rust evidenced by his four field-goal misses and one turnover, though he did collect one rebound.

“I told Spo going into halftime that I felt good. When he took me out, I was fine,” Richardson said. “It’s tough to get into a rhythm, but my teammates were good, encouraging me the whole game. I’m not getting down on anything, so I’m ready, I’m still good.”

Miami will be off until Monday night, when they travel to Oklahoma City for a contest that’s scheduled to tip off just after 8 p.m. ET.
[xyz-ihs snippet=”Responsive-ImagenText”]