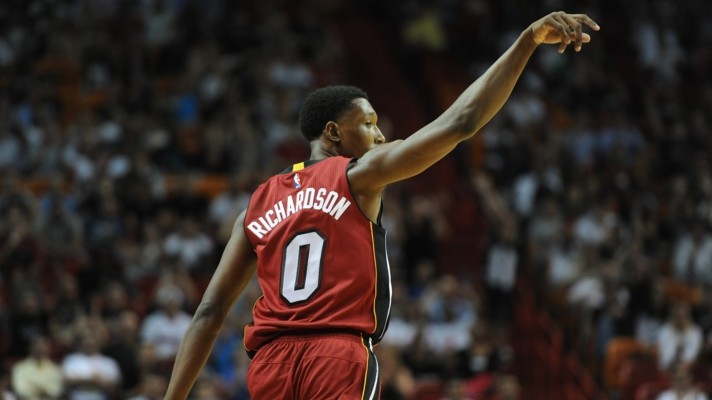 One year ago, Miami Heat guard Josh Richardson began his true ascent to respectable NBA sharpshooter status. From the end of the 2016 All-Star break up until the Heat’s playoff run last season when he partially tore his MCL, Richardson was one of the hottest three-point shooters in the NBA.

This season, it’s been a struggle for the former second-round draft pick.

Luckily for Richardson, who has been out since Jan. 8 with an ankle injury, he’ll soon have a chance to return to the court and redeem himself. In fact, he’s eligible to return as soon as Friday, when the Heat take on the Atlanta Hawks. The problem, however, is that since he’s been gone, guys like Dion Waiters and Wayne Ellington have played more than admirably in his stead.

Now, the former 40th overall pick must find a way to impact the game in a meaningful enough way to earn quality minutes moving forward. In a way, he must prove himself to his coaches and teammates all over again, but if you ask Richardson, he’s really not too worried about all that:

Surely Miami would love to see Richardson get back to his hot-shooting ways of last year, but at this point, it would be hard to justify giving him extended playing time over guys like Waiters or Ellington or even Rodney McGruder, for that matter. Heat head coach Erik Spoelstra may, however, try to plug Richardson in at the small forward spot once he gets back. At six-foot-six, and with a six-foot-ten wingspan, he certainly has the length to play the three-spot if given the chance.

“I mean, I can come in at different positions,” Richardson said of the idea. “I still know what spots to get to at each position and where they need me on the defensive end.”

The team has struggled with its depth at small forward since fellow second-year player Justise Winslow went down with a season-ending shoulder injury in January.

“I hurt for him,” Richardson said of Winslow. “I see him almost every day. I just hope that he can keep a positive attitude about it. I talk to him about it a lot, to stay up, and he starts rehab soon, so I hope it goes well.”

In addition to the ankle injury Richardson has been recovering from, he’s also been dealing with a nagging wrist injury which has likely been a contributing factor to his poor shooting. However, with all the rest he’s been getting, he claims the wrist is finally coming along, though it hasn’t healed completely:

“It’s all right,” Richardson told Winderman. “They said it (the wrist) probably won’t be all the way good for a while. So I’m just working through it. I’m starting to feel more comfortable.”

With all the success the Heat have experienced in recent weeks, Spoelstra might be hesitant to change too much once the team resumes basketball activities this week. Still, Miami has great faith in Richardson, and its looking forward to watching him prove his worth upon his return. Sure, he’s missed some significant time, but fortunately, he is still learning and growing in other valuable ways:

“Through the injuries is sort of growth for me for things that aren’t on the court, things that relate to being a leader when I’m not being effective, or when things aren’t going my way,” he said, “still being part of the team and encouraging everybody and being patient.”

In any event, Richardson will surely have to continue practicing patience once he’s given the green light to return to action as early as Feb. 24.
[xyz-ihs snippet=”Responsive-ImagenText”]