Josh Richardson: The Rise from Rookie to Revelation 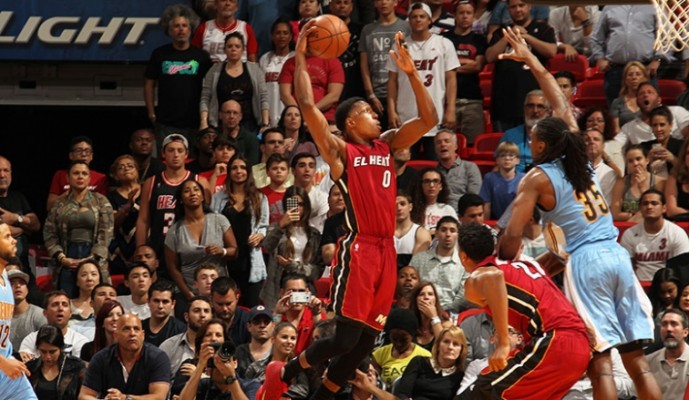 A few months ago, Miami Heat rookie Josh Richardson was just a bench player intended to play in garbage time and fill in for injured players. Drafted at #40, the young guard was meant to be a part of the Heat’s long-term plans with no substantial role this season.

Fast forward a few weeks later with a couple of trades and season-ending injuries undergone and Richardson is now a key rotational player. From the injuries of Tyler Johnson and Beno Udrih to the dealings of Mario Chalmers and Brian Roberts, the 22-year-old stands as the sole backup point guard to starter Goran Dragic on the Heat.

Needed to be counted on when it matters most, the rookie has stepped up to the occasion and has not only accepted his role but has thrived in it. Before the All-Star break, Richardson was averaging a mere 1.9 points, 1.1 rebounds and 0.8 assists on 25.9 percent shooting in 11.5 minutes a game.

Looking like a new player post All-Star break, Richardson is putting up 9.6 points, 2.6 rebounds, 1.6 assists and 1.2 steals on 54.4 percent shooting in 26.4 minutes. The sudden surge has seen the guard stand with some of the best rookies in the association. Among the talented 2015 rookie class, Richardson is 8th in scoring, 3rd in steals, 6th in blocks and 6th in field-goal percentage since the break. Not bad for the 40th pick in last June’s draft.

Perhaps the most glaring improvement is Richardson’s three-point success. Shooting 62.9 percent from downtown, Richardson is averaging the best shooting percentage (minimum of one taken per game) in the entire league in the 14 games since the break. With the help of newly-acquired Joe Johnson, Miami’s three-point shooting has risen from 32.3 percent (28th) before the break to 37.7 (6th) afterwards due to the increase in efficiency from Richardson.

The shooting guard, who spent parts of this season in the D-League, has worked tirelessly with head coach Erik Spoelstra to reform his three-point shot. Grinding under the Heat’s program, the University of Tennessee product now aims to hit 70 shots out of a 100. With unseen practice and patience, Richardson now consistently gets over 70 and, the improvement has translated directly to games. The guard has connected on at least one three-pointer in every game in March and has made at least three triples in three of the team’s last four games.

Slowly but surely, Richardson is showing Heat Nation that Justise Winslow wasn’t the only steal in the 2015 draft. From a fierce defensive prowl to an explosive, growing offensive game, the 6’6″ guard is dazzling teams with his chase-down blocks and high-flying slams. In addition to the little things, the unprecedented increase in three-point percentage is helping the Heat right when they need it.

Although the Heat didn’t sign any free-agents after acquiring Johnson, a gem has been produced in Richardson. With the much-needed expansion in play, the second-round pick has made the search for another guard, with the Heat’s open roster spot, go from mandatory to minuscule. Richardson is no longer just the team’s second rookie, he’s proven to be more than that these past few weeks; he’s been a revelation.
[xyz-ihs snippet=”Responsive-Ad”]