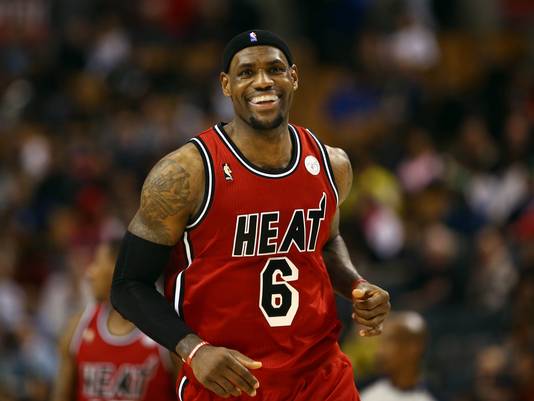 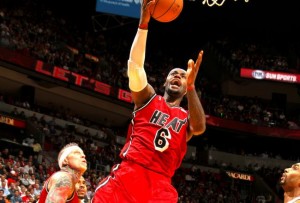 Getty Images, “For James, this season has been one virtually without statistical outliers – good or bad – but one simply of repetitive excellence on a near unprecedented scale.”

There was a time when LeBron James couldn’t blow his nose without the national media spending countless hours analyzing and discussing all the things that the aforementioned nose blow said about James’ competitive fire and desire to be a champion.

Did he use a kleenex? Toilet paper? A table napkin? And what did his choice tell us about whether or not he has what it takes to lead a team to an NBA championship?

And most important of all: would Michael Jordan have made the same choice had it been his sinuses flaring up?

For much of the first seven years of James’ future Hall of Fame career, his every move on and off the court was analyzed, scrutinized, and picked apart like perhaps no other professional athlete we’ve seen.

His ascendancy to prominence coincided with the rise of the information age and social media and his every success or failure was instantly poured over and debated by writers, pundits, and fans alike.

His detractors pointed to every minor flaw in his game as a revelation of his lack of athletic character: highlighting every missed late game free throw or every last-second pass to an open teammate in lieu of a shot attempt of his own as evidence that he didn’t possess the same competitive greatness that drove NBA legends like Jordan and Bird and Magic to championship glory.

They pointed to his self-appointed monikers of “King James” and “The Chosen One” as illustrations of an outsized ego and an off-putting lack of humility for a player yet to win at the highest level.

James’ supporters defended against such criticisms by focusing on his statistical brilliance and the unparalleled burden he was forced to carry for years for a Cleveland team that never found a second star to complement James.

Cut to the 2012-2013 season, and both sides of the debate have ceased their exhaustive arguments in support or opposition of James’ merits as an NBA superstar.

Why? Because the argument is fairly settled.

James won his NBA title last summer and did so with one of the most dominant regular and postseason runs in league history.

He was the unquestioned leader of a United States national team that won Olympic gold in London.

Few people who live outside of the Oklahoma City limits (or occupy the debate desk on ESPN’s First Take) still question whether James is the best player in the world today, and the debate that never seemed to end for the past five years or so now barely registers as a blip on the radar screen of fans and pundits when it comes to the hottest topics of NBA conversation these days.

Other stories have emerged this season. The Los Angeles Lakers soap opera has soaked up nearly as much media attention as the Miami Heat did after forming the Big Three of James, Dwyane Wade, and Chris Bosh in the summer of 2010.

Dwight Howard is the new lightning rod of the NBA, with questions of his championship mettle now being tossed around with regularity, accompanied by speculation on what he will do when he becomes an unrestricted free agent this summer just as James did in 2010.

The only consistent NBA narrative involving James this season has been whether or not Thunder superstar Kevin Durant can unseat him as the league’s Most Valuable Player.

After years of being overanalyzed and over scrutinized, James is now arguably given short shrift in the national NBA conversation, his nightly brilliance taken for granted as a consequence of his consistency.

James started the season with 33 consecutive games of scoring 20 or more points, which extended to 54 games dating back to last season.

Never known as the league’s most explosive scorer, James still finds a way to give his team a sufficient scoring punch every game while never negating his many other duties as a playmaker, rebounder, and defender.

His 15-point effort against Portland on Jan. 10 is the only occasion in which James has failed to score at least 20 points this season.

On the flip side, James hasn’t topped the 40-point mark this season, as he has done 42 times prior in his career.

For James, this season has been one virtually without statistical outliers – good or bad – but one simply of repetitive excellence on a near unprecedented scale.

For instance, has been held under 50 percent shooting in only eight of 46 games this season.

Durant has been held below that mark 15 times this season.

James has only been limited to sub-40 percent shooting one time all year, while Durant has failed to top the 40 percent mark on seven occasions.

This isn’t to say that Durant isn’t a remarkable offensive machine in his own right; he certainly is, and is widely regarded with good reason as the game’s clear-cut second best player.

That the chasm in consistency among James and Durant is so pronounced is more testament to the singularity of James’ genius.

That genius was on full display in Monday night’s home game against the Charlotte Bobcats, when James converted 13-of-14 shots from the field to post his highest single-game field goal percentage of his career, finishing with 31 points, eight rebounds, and eight assists in a Heat win.

James followed that performance up Wednesday by making 7-of-9 in the first half against the Houston Rockets to give him 20 makes in 23 attempts over a span of six quarters.

After making 34-of-48 in the last three games, James has seen his field goal percentage rise to 55.5 percent for the season, good for a team-best for Miami, and 10th best in the NBA.

Of the top 15 players in the NBA in field goal percentage, James is the only one who isn’t a full-time power forward or center, as well as the only one to average 20 or more points per game or 14 or more shots per game.

Of the top 10 in field goal percentage, the nine players other than James have combined to attempt 37 three-pointers this season, with 29 of those coming from Serge Ibaka.

James has attempted 146 from long distance, making a career-best 40.4 percent.

Roughly half of James’ field goal attempts have been jump shots this season, which makes his 55.5 overall field goal percentage all the more astonishing.

Not only is James posting a career best .498 effective field goal percentage on jump shots this season, he is also making 78 percent of his shots at the rim.

For the sake of context, New York’s All Star center Tyson Chandler, who leads the league in field goal percentage and takes nearly 90 percent of his shots at the rim, is converting 72 percent on such attempts this season.

It’s another illustration of just how seamlessly James now blends inside play with perimeter play, making himself into an essentially indefensible player.

In short, he has become the player that his harshest critics always demanded that he become: a relentlessly attacking offensive force who takes full advantage of his size and strength in the paint, while also making opponents respect his ability to make perimeter jumpers.

He is also arguably the league’s best late-game performer, posting an NBA-best +74 in situations involving his team being ahead or behind five points in the final five minutes of fourth quarter or overtime, while ranking fourth in clutch-time scoring and first in clutch-time assists.

If he finishes the season with a Player Efficiency Rating of 30 or better – he currently stands at 30.54 – he would be just the second player in NBA history to post four such seasons in a career.

The other? Michael Jordan, the man who has been the standard of excellence that James and every other great perimeter star of the past 15 years has been judged.

While James is still short of Jordan’s status in terms of achievements and career milestones, he is well on his way and is in the midst of harnessing his full abilities into one unstoppable package around the same age that Jordan himself did three decades ago.

But in today’s cynical and controversy-driven media age, the fulfillment of a great player’s considerable promise is less interesting than the potential of another supremely talented player squandering such promise.

That’s why Dwight Howard will likely continue to generate more headlines this season than James, which is a shame.

The game of basketball has seen only a select handful of players become true masters of the game and pure basketball geniuses, and LeBron James is one of those players.

It’s not often you get to see a master at work.