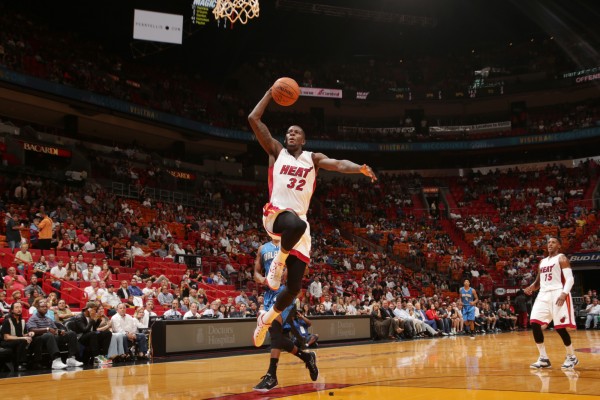 When the Miami Heat defeated the Philadelphia 76ers in their regular season finale on Wednesday night, the team hardly resembled the starting lineup that took the court in the regular season opener.

Back on October 29, the Heat defeated the Washington Wizards, 107-95, at American Airlines Arena in the first game of the season. The starting lineup was as follows—Chris Bosh, Shawne Williams, Luol Deng, Dwyane Wade and Norris Cole.

Fast forward less than six months later in the season finale versus the Sixers and two of those players aren’t even on the roster any more. The lineup versus the Sixers was none other than Henry Walker, Michael Beasley, Tyler Johnson, Zoran Dragic and James Ennis.

Those five aforementioned players combined to start a total of just 20 games during the 2014-15 season.

Erik Spoelstra had just six total players suit up versus Philadelphia—Udonis Haslem was the lone player off the bench—as the “reserves” played at least 40 minutes each in the 105-101 victory over Philadelphia.

Because the Heat were essentially playing for nothing in the finale, Spoelstra decided to give stars like Wade and Goran Dragic a rest. He decided it would be more important for the Heat’s future to see what the team’s young guys could do with the spotlight on them.

While it was just one game, Heat fans caught a glimpse of what those five bench players could bring to the table if they’re in the red and black next season.

Ennis had a disappointing season when you consider the expectations for him entering the regular season.

He was undoubtedly the Heat’s most impressive performer during the preseason. An unknown as a second-round draft selection of the Atlanta Hawks in 2013, Ennis entered the 2014 preseason camp as a long shot to make the roster.

However, the small forward averaged 11.0 points on 52.8 percent shooting from the field in the preseason. On top of that, he shot 41.7 percent from beyond the arc.

The surprising preseason landed the 6’7″ prospect a spot on the 15-man roster. Due to Danny Granger’s injuries at the beginning of the year, Ennis was the top SF off the bench.

The Long Beach State product posted averages of just 5.0 points, 2.8 rebounds and 0.8 assists on 40.9 percent from the field on the season. In the season finale versus Philly, Ennis notched a double-double with 17 points and 12 boards on 7-of-20 from the field.

While the athleticism is there, the 24-year-old is still very raw. On the open court he can dazzle with high-flying dunks, but when he’s in a half-court setting, he struggles to find a role in the offense.

However, the organization is still high on him. Look for Spoelstra to continue developing the young forward into next season.