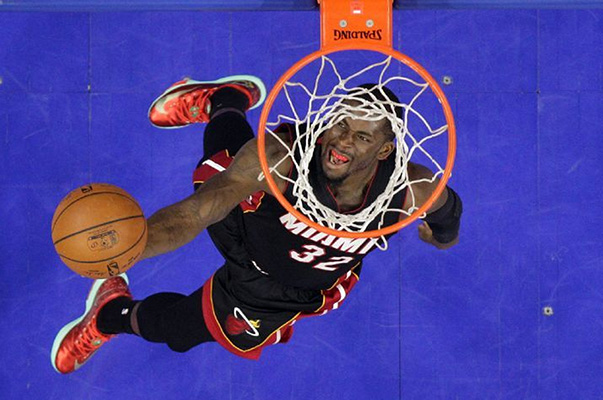 (Philadelphia, PA) — The Miami Heat (36-46) finished off the 2014-15 season with a road win over the Philadelphia 76ers (19-63) Wednesday night, 105-101, in a matchup featuring two teams with nothing to play for, except draft lottery position. The Heat were eliminated from playoff contention on Tuesday following the Indiana Pacers’ home victory against the Washington Wizards.

The 76ers, on the other hand, effectively wrote off their season before it began in hopes of earning the top pick in this year’s draft.

With tonight’s starting lineup, the Heat sets a franchise record for different lineups in a season (31).

In fact, only six Heat players got on the floor tonight, including four starters who went the distance and played all 48 minutes. But Coach Spoelstra expected his team to play out the string like professionals.

Spo on tonight’s #HEATgame: “We will remain true to who we are and play it out. Once we get to the game we will be true to the competition.” — Miami HEAT (@MiamiHEAT) April 15, 2015

True to Spo’s expectations, the guys that suited up played with pride.

Led by forward Michael Beasley, the Heat controlled the first two quarters and took an 18-point lead into halftime. Beasley scored 16 points in the first 48 minutes.

But Miami was held to 11 points in the third quarter and the 76ers managed to turn a blowout into a tight contest heading into the fourth, trailing by just four.

The Heat would lead by no more than six points in the final quarter, and actually found themselves trailing by a point with 23 seconds remaining following a JaKarr Sampson dunk. The Sixers shooting guard had a strong night with 22 points, six assists, five rebounds and three steals.

But Heat forward Henry Walker put Miami back in front for good with a three pointer with less than 10 seconds remaining in regulation, and following a three-point miss on Philadelphia’s next possession, rookie guard Tyler Johnson put the finishing touch on the Heat victory with an uncontested dunk on the other end.

Veteran forward Udonis Haslem was the only player to come off the bench for the Heat as he was scoreless in seven minutes.

For the Heat, the win is a bittersweet end to a disappointing season. Despite a raft of injuries, Miami was in position to potentially make the playoffs as a sixth seed in the Eastern Conference when they started a critical four-game road trip late last month.

But a heartbreaking loss to the Milwaukee Bucks on a last second three-pointer, along with an injury to Whiteside in that same game, seemed to take the wind out of the Heat’s sails.

Miami started the road trip coming off three straight impressive home victories, but the team staggered down the stretch, winning only five of their final 14 games.

When the Pacers beat the Wizards in Indianapolis on Tuesday night, the Heat’s postseason hopes were officially extinguished.

But Spoelstra is still pleased with the way his team played in a tough final month of the season.

Spoelstra: “I’m very proud of the toughness and grit this team has shown the last few weeks, and the guys really developed a connection.”

And in a bit of irony, although the 76ers were in tank-mode all season long, their final loss doesn’t help their cause vis-a-vis the Heat’s 2015 draft pick. By virtue of the Brooklyn Nets win earlier in the evening, the Heat now have a better than 90% chance of keeping their pick, which is top-ten protected.

The Heat’s pick would have likely gone to Philadelphia if Miami’s record was not among the ten worst in the league.
[xyz-ihs snippet=”Responsive-Ad”]