How Justise Winslow Fits into the Miami Heat’s Future Plans 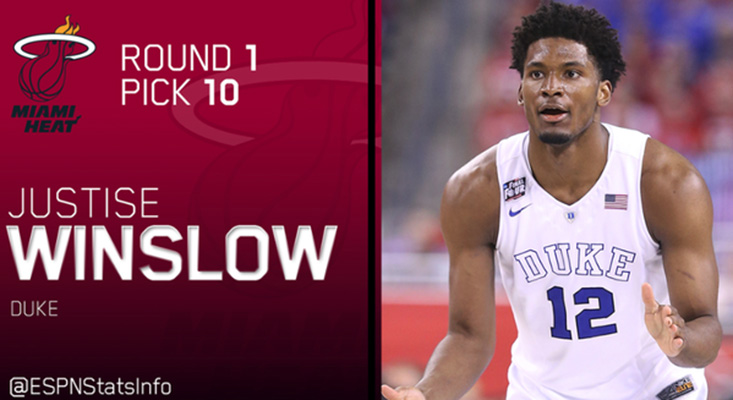 In an offseason that has been riddled with current players possibly departing the Miami Heat, Thursday night’s NBA Draft represented a positive outcome for the franchise.

With the No. 10 overall pick, the Heat selected what might potentially be their starting small forward for the next several years in Justise Winslow. Winslow is everything that Luol Deng is, except 11 years younger. The University of Duke product won a national championship in his freshman season with the Blue Devils and averaged 12.6 points, 6.5 rebounds and 2.1 assists in 39 games.

Considering he was pegged to go as high as the No. 5 pick, Pat Riley and the organization got an absolute steal with the selection of Winslow at the No. 10 overall pick.

As it stands, Deng, Goran Dragic and Dwyane Wade could all become free agents in July. If Deng decides to walk, Winslow immediately becomes the favorite to start at small forward in his rookie season.

If that is the case it should intrigue Heat fans as to what kind of traits Winslow brings to the table.

What Winslow Will Bring to the Heat

Simply put, it’s Winslow’s defense that will translate best in the pros.

The 19-year-old has a lot of excellent qualities including versatility, rebounding, high basketball IQ and an NBA-ready body, however, his defense is what will stand out.

Look at the Heat’s roster at the current moment. Outside of Hassan Whiteside, there isn’t a single player that can truly impact a game on the defensive side of things. Wade is best at anticipating bad passes while Deng is solid, but not a game-changer on defense.

In Winslow, the Heat get an impact player who is capable of starting and finishing fast breaks. At 6’7″ and 222 pounds, he could potentially get bigger and resemble a slightly smaller Metta World Peace. Ironically enough, both World Peace’s and Winslow’s positive traits on the court are eerily similar.

Riley echoed the excitement shared by all throughout the Heat organization due to the Winslow pick:

“When [Winslow] got down to 10, Micky [Arison] and Nick [Arison] started singing the Duke fight song, whatever it is, and waving the blue flags. But they’re pretty excited.”

It’s not just that Winslow is a great defender—it’s that he’s so versatile. He can literally defend both guard and both forward positions.

He is also a capable three-point shooter, having knocked down 41 percent of his shots from beyond the arc during his lone season at Duke. He’ll have a lot of open three-point shots especially if Wade and Dragic are back.

How He Impacts the Upcoming Season

It’s not just Riley and the Heat that believe they got a steal in Winslow, it’s the overwhelming majority of the media. Nate Scott of USA Today went so far as to state that the Heat are playoff contenders again due to the Winslow selection:

“Winslow can either come off the bench as an energy guy and defender, or hell, you can plug him right into the starting lineup. Goran Dragic – Dwyane Wade – Justise Winslow – Chris Bosh – Hassan Whiteside is an absolute wrecking crew of a lineup, and if Winslow can hit his open 3s (and he will get a ton of open 3s in that lineup), good lord.

Especially in the weaker Eastern Conference? The Heat may have just gone from the lottery to a top-4 team in the East with one pick.”

Miami is coming off of a disastrous season where they went 37-45 and missed the playoffs. However, keep in mind that they’re just a year removed after advancing to four consecutive NBA Finals.

Yes, a lot of that had to do with LeBron James, but assuming the roster stays largely intact—which is the goal—the team will have several players who were a part of the Heat’s championship years in Wade, Chris Bosh, Mario Chalmers, Chris Andersen and Udonis Haslem.

Despite being decimated by injuries and lack of continuity due to midseason trades, the Heat were just four games out of the sixth seed. It’s not out of the realm of reality to envision Miami back as a top-four team in the Eastern Conference with a full-season starting lineup of Dragic, Wade, Winslow, Bosh and Whiteside.

Especially when you consider that every team in the conference with the exception of the Cleveland Cavaliers and Chicago Bulls look vulnerable heading into the 2015-16 season.

Winslow could very well develop into the designated lockdown defender versus players like James and the Bulls’ Jimmy Butler in postseason battles. This is a role the Detroit Pistons’ Tayshaun Prince took on very early in his career as he was surrounded by a solid supporting cast. In Prince’s second year with Detroit, the Pistons won the championship with him starting at small forward.

The bottom line is it’s a great pick for the franchise. Honestly put, it is the best pick the Heat could have realistically made with the No. 10 overall pick.

If Deng declines his player option and becomes a free agent in July, it won’t affect the Heat much seeing as they have his younger replacement.

While Winslow stills needs to prove himself as a top-tier offensive option, he won’t be pressured to do so early on and can settle in as a defensive specialist who knocks down three-pointers due to the attention drawn from his offensive teammates.

The selection of Winslow may very well go down as one of the best in franchise history.
[xyz-ihs snippet=”Responsive-Ad”]