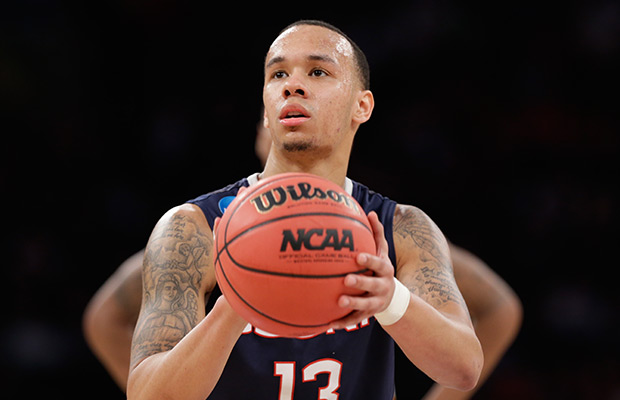 While speculation has been running rapid in regards to the Miami Heat’s “Big Three” and their pending decision to test free agency, the NBA Draft is Thursday and there is a pool of talented young players that could make an immediate impact on the teams that make their childhood dream a reality.

Rumors from “trusted sources” have confirmed that Miami is targeting a point guard to run its offense and take the pressure off of LeBron James. With Mario Chalmers set to be an unrestricted free agent and his disappointing performance in the NBA Finals, the Heat is exploring its options to improve at the position.

Although the likes of Kyle Lowry and Eric Bledsoe have been linked to Miami as they would surely be a drastic upgrade, the Heat might find it more cost-effective to draft a point guard in the first round and fill the other holes on the roster via free agency.

Napier averaged 18 points, 5.9 rebounds and 4.9 assists per game last season, leading the No.7 seed University of Connecticut Huskies to a national championship. During the six games of the NCAA Tournament he averaged 21.2 points and 6.0 assists per game while earning the honor of the tournament’s Most Outstanding Player. Napier, listed at 6-feet-1-inches tall measured in at 5-feet-11-inches during the NBA combine, shorter than most point guards in the league; but what he lacks in size, Napier makes up in speed and even greater, shooting ability. During the six games of the NCAA Tournament, Napier shot 47-percent from the three point line and 40.5-percent for the entire season. To compare, Kevin Durant shot 40.7-percent from deep in his only season with the University of Texas in 2007.

Napier possesses the rare ability to pull up off the dribble from anywhere on the court. His mid-range shooting is deadly accurate and he uses shot fakes and hesitation dribbles to create separation to get open looks. Eerily similar to another NCAA Champion UConn point guard Kemba Walker, now with the Charlotte Hornets, Napier has the “clutch gene” and is able to make tough shots when the game is on the line, a known shortcoming of the Miami Heat. Napier could split time with Norris Cole as a rookie and eventually could find himself in the starting lineup if he continues to shoot above 40-percent from deep. The hype of Napier has grown since his March Madness performance, therefore his stock has risen and it’s not a guarantee he will be available when Miami picks at no. 26. For the Heat to secure Napier, it may have to trade up and leapfrog the Chicago Bulls at pick 19 who could be targeting a point guard with the uncertainty surrounding Derrick Rose and his return from his second ACL injury.

Smith averaged 18.2 points per game last season for the Louisville Cardinals, shooting 38-percent from the three point line. Like Napier, Smith has a championship pedigree, winning the NCAA championship in 2013. Smith’s game is that of a pure point guard rather than a pull up shooter. Smith has savvy ball skills and attacks the basket at will, either finishing at the rim or collapsing the defensive and dropping it off to one of his teammates. When watching him play, his game draws comparisons to Tony Parker, albeit Parker is a much better shooter.

Smith’s greatest strength though, is his defense. Often referred to as the best perimeter defender in the country last season, Smith stifled Napier in the American Athletic Conference Championship game, limiting him to 33-percent shooting from the field as the Cardinals went on to win handedly, 71-61. For Miami, Chalmers’ inability to provide any consistent effort defensively proved too costly in the NBA Finals and Heat Head Coach Erik Spoelstra could see Smith’s defensive ability as a key factor in his system.

Miami could very well add a point guard in free agency, thus turning the focus of the draft to the power forward or center position. With the departure of Chris Andersen and the uncertainty of retaining Greg Oden for another experimental year, the Heat need another big man to surround Chris Bosh and Udonis Haslem.

It would make sense to say Stokes’ game is reminiscent of Brandon Bass. Stokes, a First Team All-SEC player, dominates in the paint with a tenacity and mean streak that is unmatched. The 6-feet-9-inch 265-pound power forward averaged 15 points and 10.5 rebounds last season for a Tennessee team that made it to the Sweet 16. In a pre-draft interview about his style of play, Stokes gave one of the best answers saying, “My biggest strength is my strength; it’s my bread and butter and I’ll never get away from that.”

Stokes uses his size and strength to position himself deep in the paint, walling off his defender and allowing for easy finishes near the rim. Most impressively for Stokes was his offensive rebound numbers. He averaged 4.2 offensive rebounds per game, ranking him as one of the best in the nation.

Stokes has a 7-feet-1-inch wingspan and uses his strength to position himself under the basket, where he gobbles up rebounds and gets easy put back shots. With the frequency of Miami’s perimeter shooting, as well as the attacking nature of James and Wade, the Heat are in desperate need of a big who can be a high energy player off of the bench that will fight for the ball down low. Although his size and strength will allow him to keep opposing forwards off of the glass, Stokes will need to work on his footwork and mobility. If he can add a mid-range jumper to his game, Stokes will also be a valuable asset in pick-and-roll situations. It may be a little high for him to be drafted, but Miami is in a position to draft a position of need over the most talented player on the board.

In the second round Miami has the 55th pick. At that point in the draft a player is usually either a work in progress who shows potential or a dud that will spend his time in the D-League and possibly change course to play internationally.

One intriguing prospect that will either be a second round pick or go undrafted and be invited to participate in the NBA Summer League is 7-feet-5-inch center Sim Bhullar. Bhullar, the tallest player in the draft, is a mammoth at 350 pounds and could stand to lose a few pounds, yet his game is one of a kind. He has a mid-range game that can be developed even more, similar to that of a Kevin Garnett. He also has the ability to run a pick-and-pop while still being able to grind down in the paint with his girth.

Last season Bhullar averaged 10.4 points, 7.8 rebounds and 3.4 blocks per game for New Mexico State University. In 2010, Miami drafted Dexter Pittman, a fellow giant who needed to drop weight in order to make it on a NBA rotation. Pittman did drop 20 pounds but was unable to surface out of the D-League and was eventually traded by Miami in 2013. Bhullar’s ability to make jump shots on a regular basis is the one factor that separates him from other larger than life centers and his potential is worth taking a second round chance on.

Heat fans should have a sentiment of relief with President Pat Riley saying, “We need to retool. Not rebuild.” As Riley masterfully orchestrated the 2010 off-season, he will do so again in 2014 and add the necessary tools to the box to remain the top contender in the league. The first chance to execute this begins with the NBA draft on June 26.