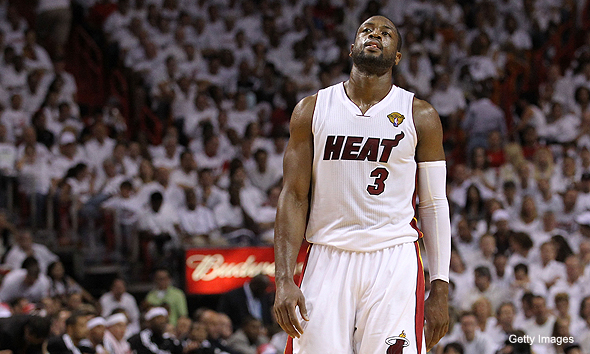 It’s not just his inability to have a positive impact on offense, his defense looked even worse.

If you go back and watch the tape of the Finals—a popular low-light reel of Dwyane’s biggest defensive lapses also exists (Per Deadspin.com)—you can see the once agile and never-not-hustling shooting guard for the Miami Heat has deformed into a shell of himself. Lumbering around aimlessly, trotting back on defense, barely contesting shooters—it’s tough to watch, but there’s a reason he looks as bad as he does.

Although his conditioning has come into question in the past, it’s clear he’s either incapable of cutting like he once was due to his ailing left knee. This is the same knee that Wade opted to have meniscus removal surgery on way back in 2002 prior to being drafted by the Miami Heat in 2003. Although removing the meniscus allowed him to return to the game rather speedily, the cost was ongoing issues that have plagued the once electrifying guard ever since.

Fastforward to the summer of 2014, and it’s clear that Wade has reached a crossroads. After just recently opting out of his contract, it’s apparent Wade is ready to re-sign with the Heat for less money (or maybe even test the free agency waters). While he still has a resume most hall of famers would kill for, your reputation in the league only gets you so far. The NBA and all professional sports leagues are essentially “what have you done for me lately” industries. As great as he once was, no team is going to pony up tremendous cash expecting a player who’s highly dependent on his athleticism to move mountains at 32 years old. Considering the context, Dwyane needs to seriously improve his conditioning and drop more weight over the summer.

Going back to September of last year, the plan was for Wade to lose enough weight to ensure his transition into the advanced years of an NBA career goes smoothly. Pat Riley knows, when healthy, Wade is an invaluable piece to this Miami Heat team’s morale and ability to compete at an elite level, and it’s exactly why he has continually preached that Dwyane lose the weight to help his joints. However, it’s becoming apparent that perhaps his value isn’t what it used to be, and although overreactions come with the territory with any massive failure, perhaps the overreactions are warranted.

Wade in his prime used to slingshot to the basket off of screens, and his always awkward fall-away jumper had enough lift to routinely splash the net. At 32, however, Wade’s jumper has regressed even further, and although his field goal percentage has increased, his game has shortened to just a few feet from the basket rather than the entire inside-of-the-arc area like it once was. Wade has to get to his spots and sometimes bully people to the rim, and even if he makes it to the rim, his lack of lift has greatly hampered his ability to finish with contact in many instances. 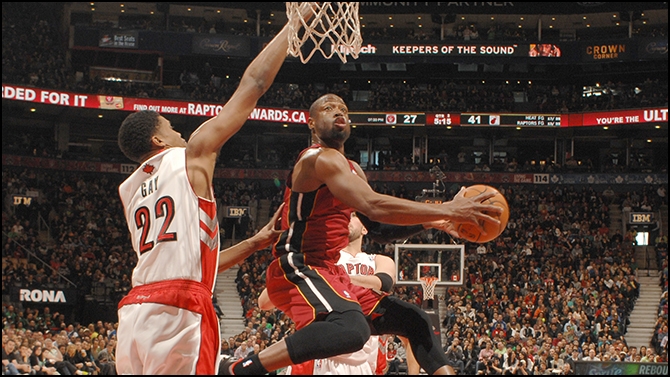 At 32, having to bang his way to the basket is only going to shorten an already shortened career, but fear not, for there is hope. If Dwyane can change his game dramatically, it’s possible he can continue to have an impact in the league.

He needs to drop significant weight, and he needs to spend an entire summer transitioning into a perimeter jumpshooter. Less weight equals more lift, and if he can rework his mechanics even further, it’s possible he can reduce his reliance on athleticism to be an effective scorer. It might sound silly or unrealistic, but it’s happened before for many players in the league.

Current Brooklyn Nets head coach Jason Kidd was a great player, but throughout his early career, he was often criticized for a terrible jumpshot—so much, that so many called him ‘Ason Kid, you know, because he had no “J”. After his athleticism and speed tremendously fell off, Kidd became a lethal sniper from deep, and he was a key cog in a 2011 NBA Championship-winning Dallas Mavericks squad that torched the Miami Heat from the perimeter much like the San Antonio Spurs did in this years NBA Finals. In more recent years, Blake Griffin’s awkwardly-timed jumpshot was reworked, and he has emerged into a truly lethal scorer from all over the floor. So these are two players—one old, one young, one a guard, one a big man—that completely broke their jumpshots down and rebuilt them from scratch. If they can do it, why can’t Wade?

Some still might contend with, “Well, if he hasn’t figured it out now, he’ll never figure it out.” Essentially going with the old, “you can’t teach an old dog new tricks.” Here’s the problem: we don’t know just how hard Dwyane has worked to change his game. From 2008-2009, Dwyane Wade had arguably the greatest individual season of his career. During that season, he averaged 30 points per game—the highest of his career, and during that season, most of his field goals were attempted 12 feet away from the basket—the longest average distance on his field goal attempts for his career.

From the eye test alone, Wade was doing most of his damage that year off of the dribble around the left elbow area with his jumper.  That same season, Wade shot a highly efficient 52-percent from two-point range, and although he has shot a higher percentage in every season since 2008-2009, remember, he also averaged a career high 22 field goal attempts per game as opposed to only 14 or 15 for 2013-2014 and 2011-2012 respectively. To shoot with such efficiency considering the volume he used is extremely impressive. Even with all of this brilliance stemming from his jumper alone, he still played the game like a bat out of hell; he didn’t really change it all that much, but he managed to get away with things he simply can’t do anymore.

Even though Wade has done damage with his jumper in the past, and whether the decline can be attributed to shaky mechanics or loss of verticality, the fact remains that change for the better is possible. Whether or not LeBron James tests the free agency market should be irrelevant for Wade. His focus should be on figuring out how to transition into the 2014-2015 season the best way he can, and it’s likely this transition will center around transforming his game from in-the-paint slasher to hanging out on the perimeter draining jumpers.

It’s time that he proves that the Flash we fell in love with watching is still in there somewhere; he needs to prove that his starpower still burns bright, and he wasn’t just a flash in the pan.