Is it fair to compare LeBron James and Kobe Bryant at each player’s respective stages in his career? No. Was it fair to compare Kobe Bryant to Michael Jordan when Kobe was in LeBron’s position? Absolutely not. One can only compare a player’s legacy to that of another player’s when it is all said and done. With that being said, I think that the greatest of all time talk should be based on three key aspects: statistics, accolades, and rings, the latter being the least important because it is a team accomplishment, not an individual one.

Let’s start with the acclaimed G.O.A.T. in Michael Jeffrey Jordan.  Throughout his career, Jordan averaged 30.1 points per game (#1 among all players in NBA history), 6.2 rebounds per game, 5.3 assists per game, 2.35 steals per game, all while shooting the ball at a mesmerizing 49.7%.  As far as accolades go, M.J. racked up 5 Most Valuable Player awards, was a 10-time scoring champion, won 3 NBA All-Star MVP’s, and to top it off he won the Finals MVP 6 times. In addition to all of these astounding accomplishments, Michael led his team to the promised land 6 times. And many of you are still wondering why he’s considered the greatest of all time? Moreover, the reason why I believe rings alone do not justify a player’s worth is because there is so much more involved than just an individual player’s contributions. You have to take into consideration the players that Jordan played alongside with, Scottie Pippen, Dennis Rodman, Steve Kerr, Toni Kukoc, and let’s not forget about the mastermind behind it all, Phil Jackson. On the other hand, when using statistics and accolades to measure a player’s worth, there is clear cut evidence of how dominant that player was during his time.

Moving forward to Kobe Bean Bryant, a.k.a. the “Black Mamba,” Kobe was a big surprise to the entire league.  After a rookie year of averaging a mere 7.6 points per game, Kobe right now for his career is averaging 25.3 points per game (#11 among all players in NBA history), 4.7 assists per game, 5.3 rebounds per game, 1.5 steals per game, while shooting the ball at 45.4%, which is a good field goal percentage, but not great.  As for accomplishments, Bryant has won the Most Valuable Player award once, is a 2-time scoring champion, won 4 All-Star game MVP’s, and has 2 Finals MVP’s. Now, let’s not forget about Kobe’s 5 NBA championships that everybody declares puts him over the top, so over the top that many fans, commentators, and journalists claim he is the 2nd best player of all time, only 2nd to Michael Jordan, if not the greatest of all time.

Before I even begin comparing these three players, let’s bring another player into the debate, LeBron “The Chosen One” James. Unlike Mr. Bryant and arguably Michael Jordan as well (3rd overall pick in the 1984 NBA draft), everybody and their mothers knew that this kid was going to be something else. Not a knock on LeBron James, but it seems like he was so talented when he entered the league, that he didn’t have to work on his game as much as Kobe or MJ. Therefore as far as work ethic is concerned, Kobe and MJ are in a league of their own undoubtedly. However, one thing that stands out with LeBron is his superiorness in the statistical department. For his career, LeBron is averaging 27.7 points per game (#3 among all players in NBA history), 7.1 rebounds per game, 7.0 assists per game, 1.7 steals per game, is shooting the ball at an effective 48.1% from the floor, and is on the fast track to shattering Kareem Abdul-Jabbar’s all-time scoring record. It doesn’t stop there. So far in his career, LBJ already has 2 Most Valuable Player awards, is a one-time scoring champion, and has 2 NBA All-Star MVP’s. 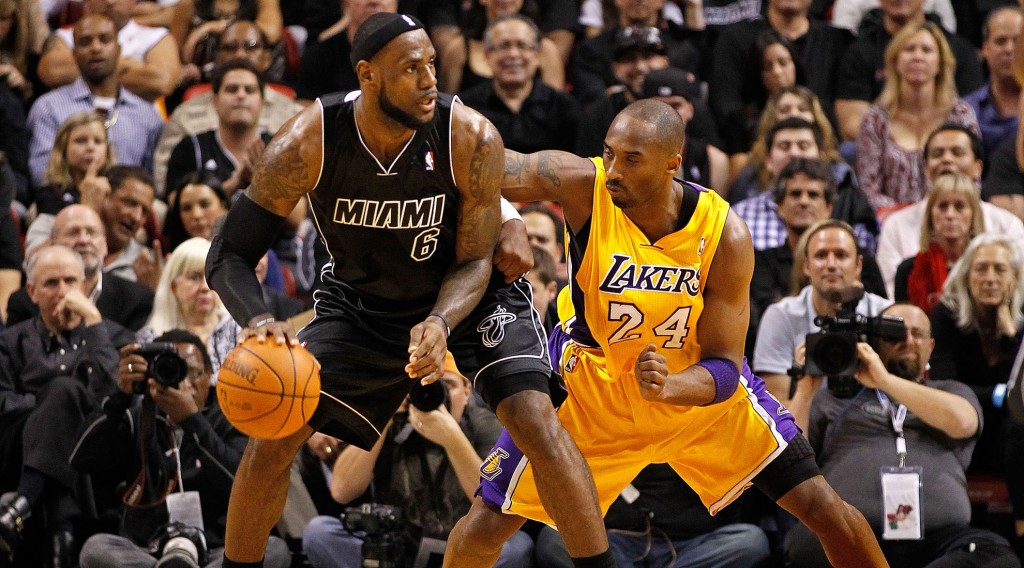 Now, lets break down the player comparisons.  Statistically speaking, LeBron and Jordan are very similar, with LeBron getting the edge in rebounds and assists, Jordan edges LBJ out in points and field goal percentage. From a purely statistical standpoint, Kobe shouldn’t even be in the conversation with LeBron or MJ. When speaking of accolades, this is where things can get a bit tricky because Kobe still has a good 3-4 years left in his career, while Lebron has atleast 7 more good years in him. So, we’ll leave that one alone for now and all agree that currently, Michael Jeffrey Jordan was and is the best basketball player of all time in regards to statistics, accolades, and championships.

Alas, we have arrived at the part of the discussion that involves the rings, the hardware, the Larry O’Brien trophies are what everyone likes to talk about. Let’s just compare Lebron and Kobe for now, since both players are currently still in the league. This is just one argument that I could never understand. So you’re telling me that a guy that was not even the best player on his team for 3 of his championship runs, should be declared the greatest of all time, second to Jordan, simply because of his rings? Then why isn’t Bill Russel in the greatest of all time discussion (11), why not John Havlicek (8), what about “Big-Shot Bob” or Robert Horry (7).  Does anybody remember who Sam Jones is?  Because he has 8 rings. So for the sake of argument let’s not justify a player’s worth solely on rings anymore because it makes for a petty discussion. We all should know that much more is involved such as the aforementioned statistics and accolades. As far as statistics are concerned, LeBron clearly comes out on top. As for accolades go, the two are pretty much even being that LeBron has more MVP’s and Kobe has more scoring titles. So the only thing separating Kobe and LeBron is the hardware. Don’t get me wrong now, Kobe was a major contributor in the Laker’s 3-peat and deserves just as much credit as Shaq did in the finals. But to say that he was the best player on the team during their 3-peat is outlandish. There is no doubt in anybody’s mind that during Shaq’s golden era he was the most dominant big man in the game. One may interject with, “But Kobe did it alone when he won back-to-back titles in ’09 and ’10.” Not by any standard did he do it alone. He had two all-stars, Ron Artest, a 6th man of the year, and let’s not forget the mastermind behind it all once again, Phil Jackson. I wouldn’t call that doing it alone by any stretch. When Kobe was truly alone, his team didn’t make the playoffs in ’04, and got knocked out in the first round in ’05 and ’06. He then demanded to be traded unless the Lakers made a viable trade. Consequently, they landed all-star Pau Gasol shortly after, and therein won back-to-back titles eventually.

Conversely, LeBron James really tried to do it alone and we should applaud him for atleast making it to the NBA finals with a team of not-so-good players, among the best players on the team were Larry Hughes, Zydrunas Ilgauskas, Drew Gooden, Eric Snow, and Daniel Gibson. As a result, LeBron did the same thing Kobe did and complained to the front office that he needed some support or he was out. The best they could give him was a beat up Shaq for one year, and then their big blockbuster addition was an aching Antawn Jamison. That’s when LeBron James decided he was leaving and created the big debacle on national television and all pandemonium broke loose. It was LeBron’s way of saying, “I’m doing things my way and nobody is going to stop me.” He was right. Nobody could stop him because he was a free agent and was his decision a wise one? In my opinion, absolutely. Although, many claim that the choice LeBron made will ruin his legacy and makes him less competetive as a player, no player has ever been put in that position. As stated before, nobody has done it alone, and Kobe Bryant and Michael Jordan were fortunate enough to have a front office that actually made big moves.

With that being said, last year the Miami Heat were 2 wins shy of the Larry O’Brien trophy, and this year they are not as much under a microscope, and you can already tell that they are approaching the game with a much different mentality. Currently, it is unfair to compare LeBron to Kobe because they are both at different stages in their careers. But one thing is certain, when it is all said and done LBJ will go down as one of the greatest, if not the greatest of all time, right alongside Kobe Bryant and Michael Jordan. How the pecking order will fare remains to be written in the books of history.